Tony Caridi and I do a podcast each week entitled Three Guys Before The Game. During the football and basketball seasons were joined by Hoppy Kercheval (during football) and former WVU standout Nathan Adrian (during basketball).
We do two podcasts a week. One breaking down the game that just happened and another one previewing the next game. Once the season(s) end we transition into a different format.
Tony and I are joined by a WVU coach or support staff member for a longer sit down discussion. We’ve had some wonderful guests over the 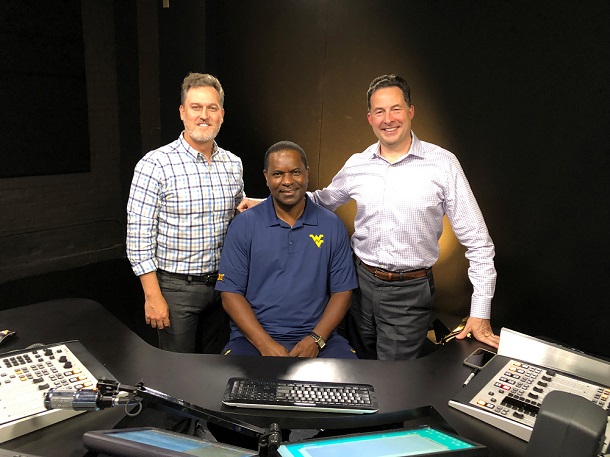 last year: DaSean Butler, Joe Alexander, Jeff Hostetler, David Sills, Gary Jennings, Trevon Wesco and David Long to name a few. The insight they all have given and the stories they tell are fascinating.
Two weeks ago we were joined by WVU basketball associate head coach Larry Harrison. Larry has been at WVU for 12 seasons now, but he told us some things I did not know.
One of his best friends in college? Tony Dorsett. Yes, that Tony Dorsett.
He talked about hanging out with Dorsett and other football players, including the great Hugh Green, while Dorsett’s Heisman Trophy sat on the table.
Before coming with Bob Huggins to WVU, Harrison spent eight years with him at Cincinnati. However, prior to Huggins hiring him at Cincinnati, Harrison had never even met Bob Huggins.
The matchmaker? Tom Crean. The former Marquette and Indiana head basketball coach now at Georgia. Crean and Harrison used to travel the country in their younger days going from basketball camp to basketball camp in the summers. It was Crean who told Harrison he and Huggins would be a great fit together.
Crean then introduced the two at a Final Four gathering. And the rest, as they say,  is history.
Equally as fascinating was our guest this week ...the first and only head women’s soccer coach in WVU history, Nikki Izzo Brown. She told a story about her college coach, Terry Gurnett, putting her on the path to be a coach herself. 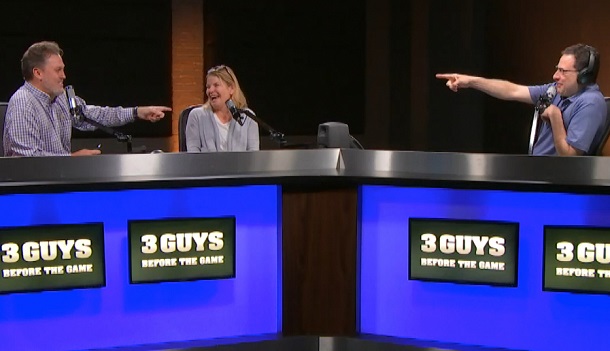 Gurnett told Izzo Brown he thought she would make a great coach. That was her senior year of college (at the University of Rochester) and she confessed the thought of her coaching had never crossed her mind. Often times we don’t realize the moments that shape our lives as they are happening. They only become clear after many years.
Nikki Izzo Brown’s life course was set more than a quarter of a century ago, nearly 400 miles from the place she would eventually call home. And it was all because of a comment from her college coach.
Remarkable.
If you’re interested in hearing more stories from Larry Harrison and Nikki Izzo Brown, I invite you to check out Three Guys Before The Game.
You can watch past episodes HERE.
Or download the audio versions on iTunes, Google Play or if you have an Alexa-enables device just say “Alexa, play Three Guys Before The Game.”
Editor's Note: Top photo shows, standing from left, Brad Howe and Tony Caridi, while WVU Assistant Coach Larry Harrison is seated. Below, Howe, left and Caridi have a bit of fun with Nikki Izzo Brown. Photos courtesy of Brad Howe.