The Bridgeport High School Alumni and Friends Foundation has announced its board of directors prior to the start of the 2019-20 school calendar year.
The Foundation was formed in 1996 and began awarding scholarships in 1999. Through increased fundraising efforts and generous alumni and friends, the Foundation has steadily increased the amount of scholarship money available for BHS seniors. In 1999, two scholarships 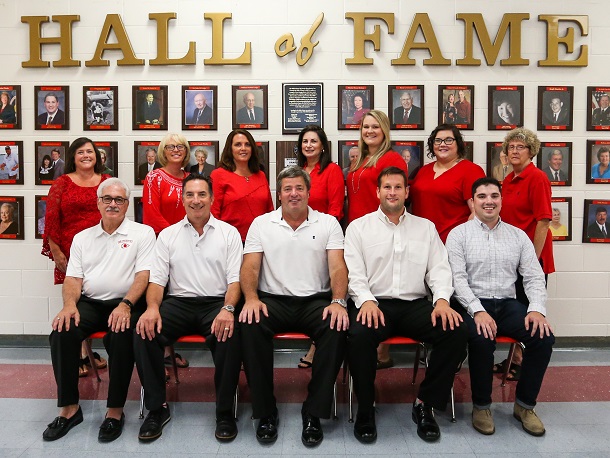 totaling $500 were awarded and since then dozens have been awarded totaling tens of thousands of dollars.
Along with raising funds for scholarships, the Foundation also holds an annual Bridgeport High School Hall of Fame dinner. The BHS Hall of Fame dinner will be on October 26, 2019 at the Bridgeport Conference Center. Those being inducted this year are Michael Walker, Dr. Harry M. "Hank" Murray, and Dr. Roberta Atha Strosnider.. The public is encouraged to attend as we celebrate and honor this year's inductees. For ticket information, call Darletta Stout at 304-203-8300.
The photo shown is of the new board and it shows back row, from left, Roberta Sinsel - Faculty Representative, Cookie McGinnis Compton ’75, Pam Hitt Pinti ’82, Darletta Barth Stout ’76, Brooke Harvey Cunningham ’09, Hannah Cantrell Edwards ’09, and Alice Rowe.
Front row, from left, are Mark DeFazio, Matt DeMotto – Principal, Chuck Steele ’85, Patrick Snell ’04, and Michael Gruber ’08
Not pictured are Lisa West Cook ’79 and Caryl Linger Trippett ’78.