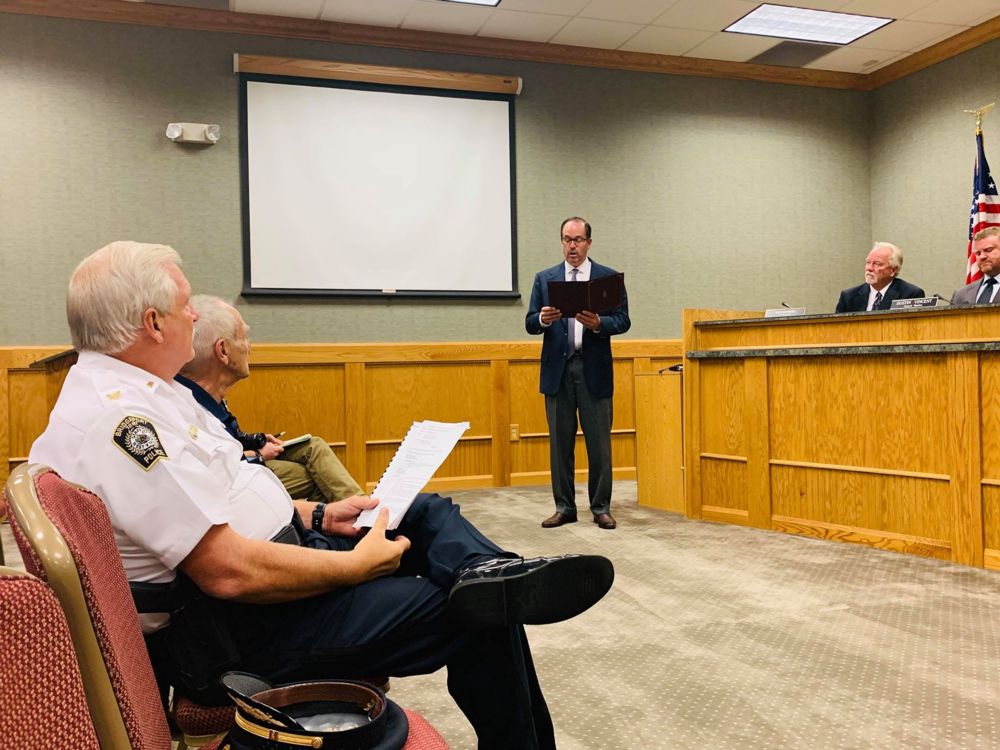 Bridgeport City Council’s first meeting for September featured a handful of business items which required vote. One was to award a contract to Underwood General Builders Inc. for Phase 1 of the Route 131 structures. The contract was awarded for $598,947 with a 10 percent contingency.
“This is following up site work on the Route 131 property which the city acquired by the airport with the intention of using it as a salt storage facility area and also for a parks and recreation department office and garage and – in the future – for police, public works and additional pole buildings for parks and recreation,” said City Engineer Beth Fox. “But this first phase is structural concrete of salt storage, a parks and recreation office and attached three-stall garage – part of the plan since the property was acquired.” 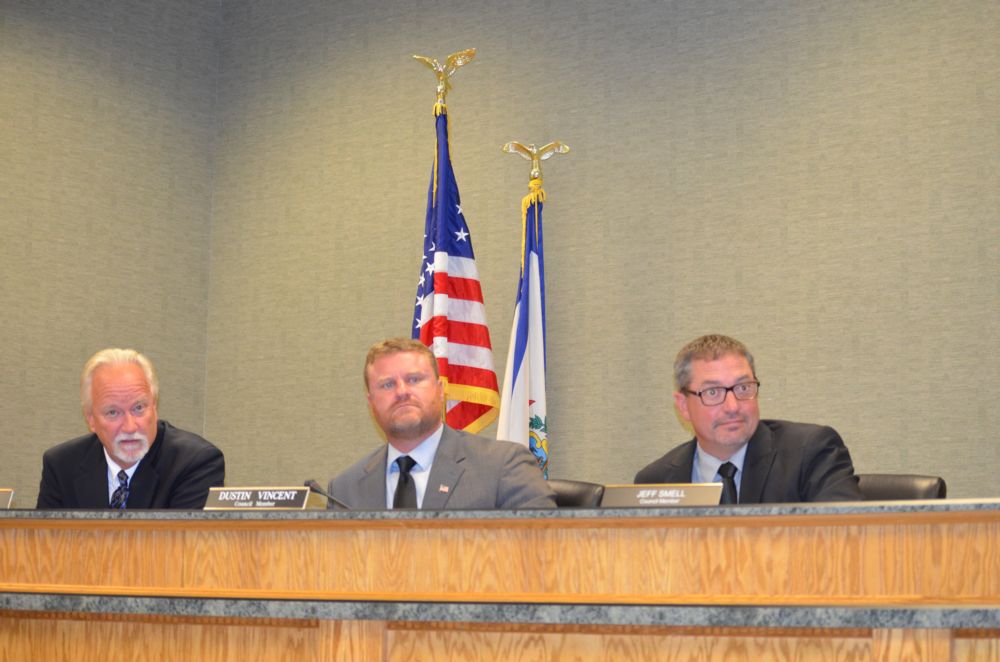 Council also approved a capital reserve fund budget revision for $62,213, additional funds needed for Phase 1 completion. Those funds, said Finance Director Monica Musgrave, are to be taken from funds set aside for future expansion needs.
“That makes the total cost of this project, so far, more than $1 million,” she said. “That includes purchase of the property, demolition of the barns, site work and Phase 1 of the project.”
Another contract approved unanimously by Council was with one with Tarradon Corporation as construction manager and special inspections consultant for the Indoor Sports & Recreation Complex. The contract was awarded for $379,500 with a 10 percent contingency.
Fox said three consulting firms were considered, a committee of five selecting Tarradon. The consultant will look out for the city’s best interest during construction of the complex. 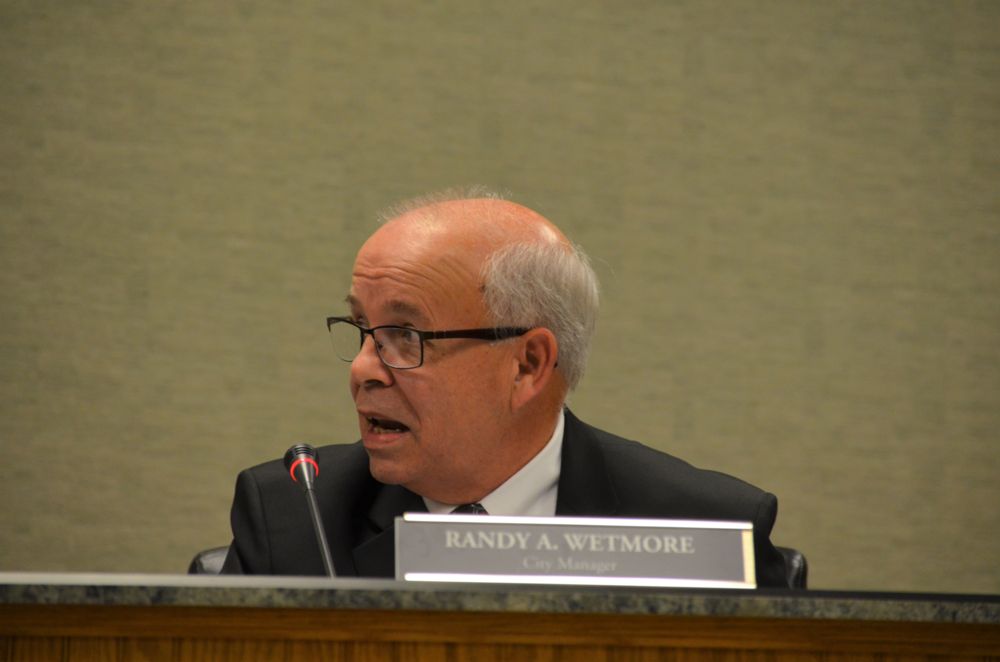 “There will be a representative there every day to report back to our staff,” she said.
Also as was voted by Council Monday evening, the city will enter into a contract with DataMax Corporation to collect business licenses and business and occupation tax fees due to the city.
“This is a contract where it will be up to them to find those businesses which haven’t been paying taxes,” said City Manager Randy Wetmore. “If they find them, they keep 50 percent for the first two years and at the end of two years, the city keeps it all. If they don’t find anyone, they make no money.”
Musgrave, who recommended the city retain DataMax, said the company – with which other West Virginia cities, including Morgantown, have worked – seeks out businesses which are difficult to identify and locate. For example, she said, there are various services conducted through United Hospital Center that her staff of two individuals aren’t aware of and therefore, such service companies don’t purchase licenses or pay B&O taxes. Other cities working with DataMax have collected between $60,000 and $346,000 in taxes.
Mayor Andy Lang also read a proclamation recognizing Heroes Day in the State of West Virginia, expressing appreciation for service of 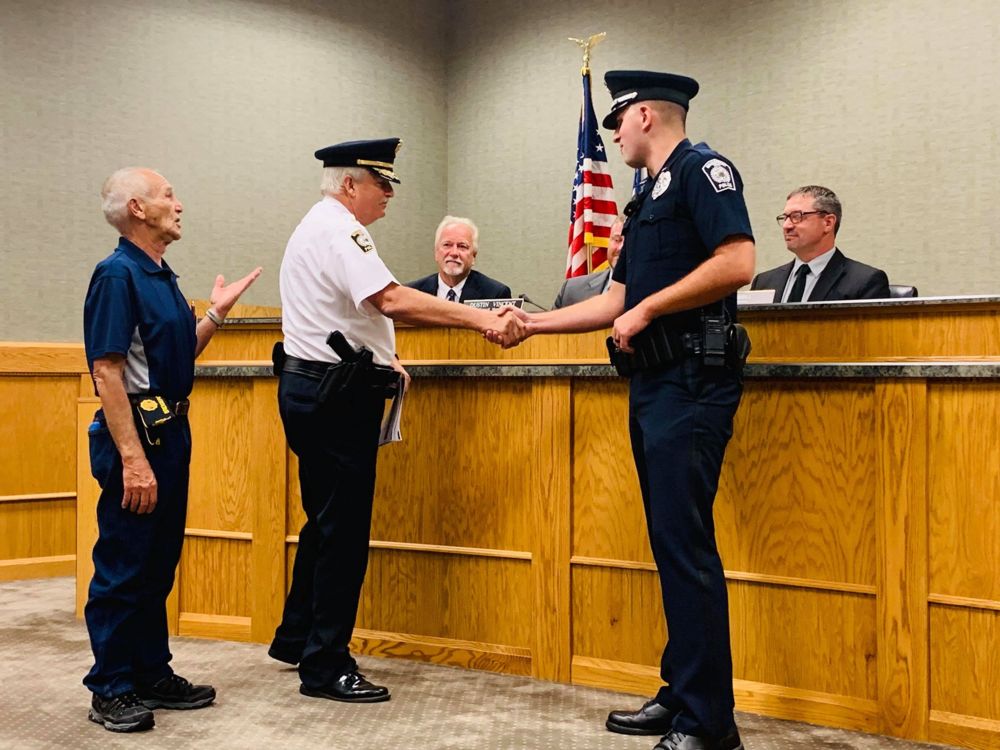 first responders and sacrifices made for that service.
Bridgeport police Officer Aaron Lantz was recognized as West Virginia Police Officer of the Year by the West Virginia American Legion. Bridgeport Police Chief John Walker shared Lantz’s track record with Council and others in attendance.
“In his goal to intercept drugs being trafficked down the highways, we target interdiction spots like hotels and specific residences and through that work, he has conducted 550 traffic stops, made 30 felony arrests on his own, through his own investigation and made 85 misdemeanor arrests," Walker said. "Along with seizing counterfeit money and drug paraphernalia, he seized $8,000, 13 firearms, a stolen vehicle and six stolen license plates. In addition to other drugs, he has seized eight ounces of THC, 14 grams of THC oil and three grams of cocaine. He is a highly successful officer and we’re proud of you, Aaron. I know you have made a lot of sacrifices in your life to be able to do this work and we appreciate you and your family.”
Several members of Lantz’s family were on hand for the recognition. Lantz has been officially invited to attend the Mid-Winter Conference of The American Legion, to be held in February of 2020 at Oglebay Park in Wheeling. He will be considered for a national award.
Council also approved a $138,000 budget authorization for the completion of storm water upgrades to Ventura Drive.
“We completed one entire lane and at this time, there are other projects our public works employees need to be working on,” Fox said. “Mountaineer Contractors are doing other repair work throughout the city and with a vast number of workers can get the lane done in three to four weeks.”
The Ventura Drive work will be conducted by Mountaineer Contractors at the same unit bid price as other work throughout the city, she said.
Council also voted to appoint Philip Freeman for a three-year term on the Bridgeport Planning Commission and Brian Kemmerer for a four-year term on the Police Civil Service Commission.
Councilman Bob Greer and Mayor Lang vouched for the candidates, respectively, saying their service will be of great value to the city.
Before adjourning, Council members individually extended their appreciation and congratulations to Lantz and to all police, fire and emergency personnel. There was also a shout out to JC Films, a film production company, which will soon film its fourth movie in Bridgeport and surrounding areas. Lantz had a role in "A Promise to Astrid," starring Dean Cain and featuring several locals.
Walker said he will be soon be meeting with a representative of JC Films about the filming of the police drama, “Dispatched.” Walker and his department will be working with the company throughout the filming of the movie. Filming starts late this month.
Pastor Mike Hopkins of Simpson Creek Baptist Church provided the invocation for Monday evening's meeting.