Despite getting the upper hand for the second straight week in a Class AA battle of top 10 teams, Bridgeport didn’t fare well in the latest edition of the MetroNews High School football power rankings.
The Indians, who were ranked No. 4 last week, fell to No. 5 in the latest poll voted on by a panel of statewide radio broadcasters and sports 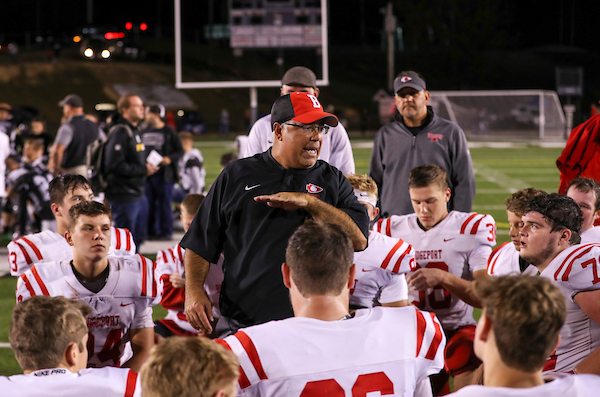 writers. The drop came despite topping homestanding and top-10 ranked North Marion by a 35-20 score in Rachel on Friday.
BHS, 5-1, fell behind undefeated Poca (6-0). The Dots are the new No. 4 after beating Sissonville by a 69-24 score.
Fairmont Senior remains a unanimous No. 1 with all 19 first place votes. The Polar Bears are 5-0 and are coming off a bye week. The team will be at Weir on Friday.
Defending Class AA state champion Bluefield is No. 2. The 4-1 Beavers are coming off a 49-14 win against Point Pleasant.
Future Bridgeport opponent Keyser is No. 3. The 6-0 Golden Tornado beat Hampshire 62-0 on Friday to solidify their spot in the standings.
No other local teams are ranked in the top 10. North Marion, Liberty and Lewis County are in the “also receiving votes portion of the poll.”
In Class A, Doddridge County is new top-ranked team with a 5-0 record. The Bulldogs beat Wirt County 35-0.
Martinsburg remained the top team in Class AAA. The Bulldogs are 6-0 after beating Washington 62-0.
Click HERE for the top 10 in all three classifications.