From the Bench: How One Player's Selfless Reaction to Lineup Change Helped Lead to Another Title

By Jeff Toquinto on December 15, 2019 from Sports Blog

He stands at 5’8 and, according to the roster, he weighs in at 180 pounds. In West Virginia High School football, those physical numbers would be considered small.
Yet those numbers are as big a reason as any that Bridgeport High School walked away two Fridays ago with a Class AA state championship in football. Ask BHS Coach John Cole. Ask Carson Winkie or Trey Pancake. 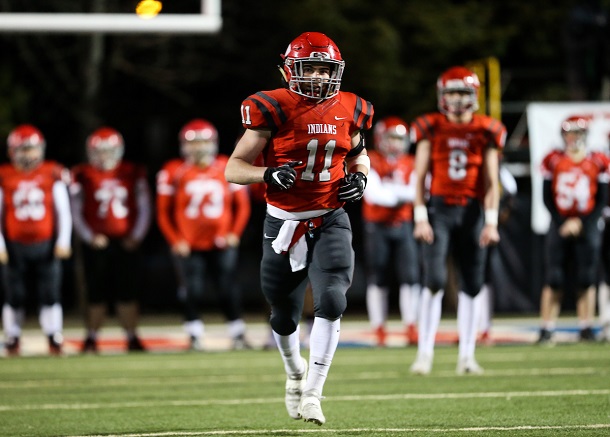 Heck, while you’re at it go ahead and ask someone playing for Bluefield if they remember the 5’8, 180-pound kid in the backfield. They may not know his name, but Cole and his teammates certainly are aware of senior Brian Henderson.
Henderson, who started the season at tailback and posted some big numbers early, didn’t carry the ball one time in the Indians’ biggest game of his career in his final season. The person who probably cared least about that was Brian Henderson.
That, along with so many other factors, is a reason that the Indians hoisted their 10th football state championship at Wheeling Island Stadium. If you’re confused how a player that didn’t carry the ball once in the title game and saw his carries dwindle significantly as the year went on played such a huge role, I’ll get to that.
Understand, what Brian Henderson did this year epitomizes Indian football. He epitomized the “team first” mantra in every manner – most importantly with action. 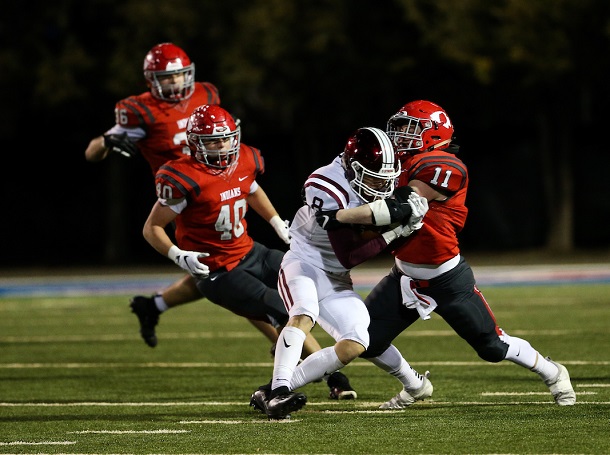 Henderson finished the year with 665 yards rushing on 118 carries in 14 carries with nine touchdowns. Not too bad of an output.
Here’s the thing: Henderson got the vast majority of those carries in the first half of the season. It was then that he was the tailback in the Tribe’s offensive attack and for anyone following the program, they know that it’s the position that draws the most eyeballs.
Yet when the Indians opted to move Carson Winkie to the feature back roll in week six against North Marion, Henderson didn’t pout. Henderson didn’t complain. He didn’t become a malcontent.
Instead, he moved back to his familiar role as the upback, or H-back, and did what he did best. He hammered the opposition as the lead 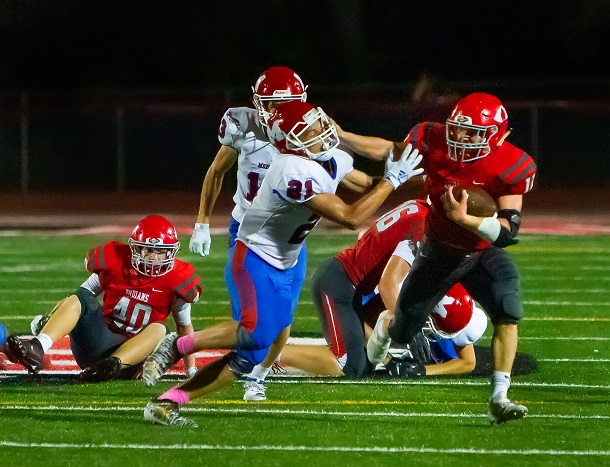 blocker to plow the way for the back now handling his duties as well as Pancake at fullback.
“My mindset was I just want to win and if the team needed me there then that’s what I’m going to do. I’m going to go play the best I can,” said Henderson. “My goal was to kick butt as much as I can because the goal isn’t stats. The goal is winning a title and we did that.”
They did that because Henderson, as he pointed out, “kicked butt.” Several times during the ‘AA’ title game, it was Henderson kicking out and blocking West Virginia University bound defensive lineman Sean Martin – all 6’6 and 255 pounds – to help Winkie run for some of his 200 yards.
Whether it was Martin or anyone else, they got the best that Henderson had to offer. As the cheering was still taking place following the Tribe’s 21-14 win, Cole was more than happy to talk about what Henderson meant to the team. 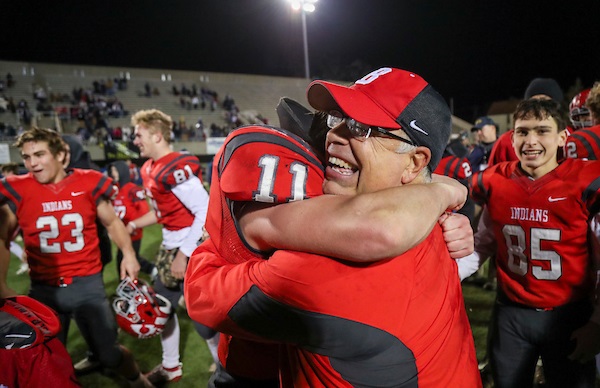 “He’s invested in this team. When you’re invested like Brian Henderson is invested by putting all that work in, you just want to win,” said Cole. “Bottom line is he’s a good young man who did what we asked him to do and then went and did what he was supposed to do.”
Henderson, like so many others on the BHS squad, isn’t a Division I athlete. But he’s got to where he’s at thanks to something that anyone that wants to get better can be – a hard worker. Cole said that’s where he became the player that you saw making a big difference the entire season for the 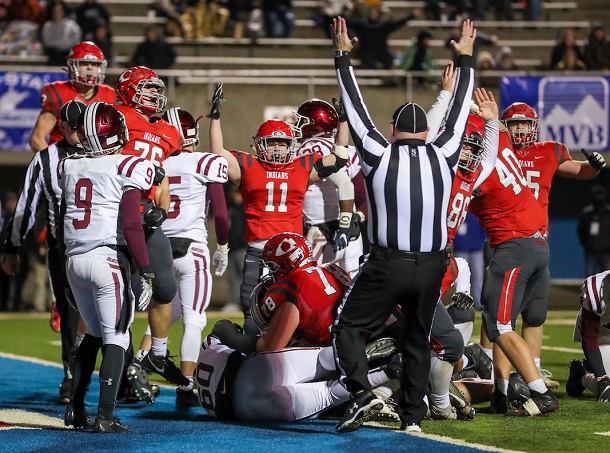 Indians and a huge difference in the Class AA state title game.
“What you see with Brian is the result of hard work, particularly in the weight room. He’s not a real big dude, but my goodness he’s front squatting 300-plus pounds. He’s a strong young man who doesn’t back down from anyone,” said Cole. “You have players like that on the team that you can ask to do anything, and they do it. You better believe Brian Henderson made a huge impact on this state title because he’s willing to do whatever you ask of him.”
And if they could rewind everything and ask Henderson again?
“If they told me I had to do it like this again, I’d absolutely do it again because the stats just don’t matter. Good things happen when you put team first,” Henderson said.
Hard to argue with Henderson on his last point. After all, he’s got some state championship hardware to prove it.
Editor's Note: All photos, with exception of the third photo, by www.benqueenphotography.com.