For those frequenting Deegan and Hinkle Lakes, there’s been some improvements quietly made that should benefit those who like to spend 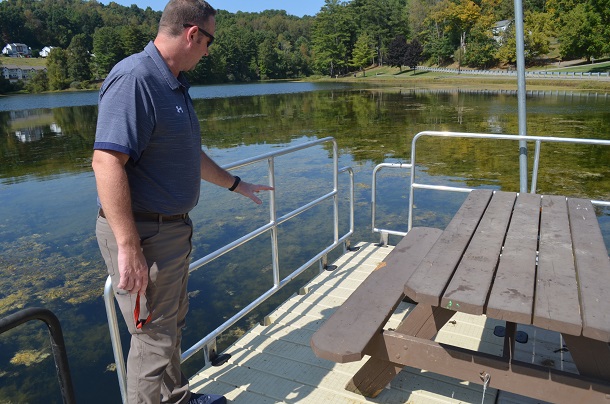 some time out on the dock. In fact, there’s been several thousands of dollars in improvements.
Bridgeport Parks and Recreation Director Joe Shuttleworth said the recent improvements were necessary. And along with doing the necessary repairs, a few other upgrades were done as well.
“We had an issue come up in the spring where we noticed a section of the floating dock was starting to sink and the rest of the was basically holding it up,” said Shuttleworth. “The entire dock was leaning because of the one section.”
After checking it out, a section of the floating dock was found to have a crack in it. Due to the crack, the floating portion of the dock was taking in water to weight it down. 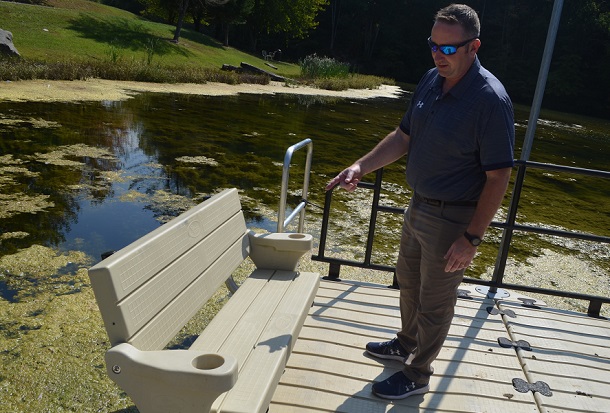 “We had to order a new piece for the dock, cut it out and reattach it,” said Shuttleworth. “It wasn’t as simple as it sounds, but it also wasn’t terrible as far as replacing it either. It was just a little more difficult than most repairs.”
One other thing was different than most repairs. Staff members of Parks and Recreation had to get into the lake to do the repair.
“I think some of them enjoyed it,” said Shuttleworth with a laugh.
The repairs didn’t stop there. There were also new handrails put up that replaced older ones that were getting rusty. Shuttleworth also said a new bench was added at the end of the dock as well.
The cost of the repairs was $4,000. That does not include what it would cost figuring in time spent by P&R staff.
Editor's Note: Top photo shows Joe Shuttleworth on the new portion of th the dock that was replaced, while he's shown with one of the new benches in the bottom phtoo where the new black handrails can be seen in the background.