By Connect-Bridgeport Staff on November 30, 2022

West Virginia University has named Wren Baker as its next vice president and director of Intercollegiate Athletics.
Baker comes to Morgantown from the University of North Texas, where he has been the vice president and athletics director since 2016. With previous stops at Missouri, Memphis, Northwest Missouri and Rogers State, Baker brings more than 20 years of experience to WVU as its 13th director of Athletics. 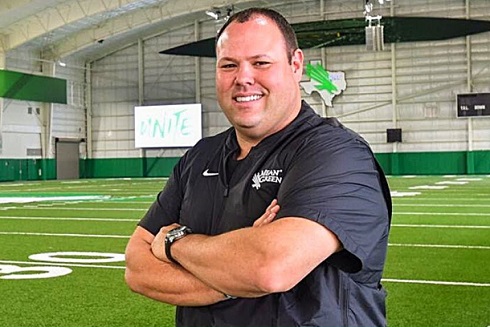 “I am thrilled to welcome Wren Baker to the West Virginia University family as our new athletic director and I have no doubt his personality and energy will connect with our student-athletes and coaches, as well as our campus community and alumni,” President Gordon Gee said.
“When we began this search, we were determined to find someone who could lead in the modern realities of intercollegiate athletics and build on the legacy of his predecessors,” Gee added. “We wanted someone who clearly understood the dynamics of a fast-changing athletics environment and had found success being at the forefront of this new world that includes managing NIL and the portal. We looked at a number of well-qualified candidates and, at the end of the day, Wren met every one of our needs.”
Baker will have oversight of 18 varsity sports, a department budget of more than $90 million, approximately 250 employees and nearly 500 student-athletes.
“I am incredibly grateful to President Gee, Rob Alsop, the search committee and Board of Governors for the opportunity to serve as vice president and director of athletics at West Virginia University,” Baker said. “WVU boasts a powerful brand reputation and a storied academic and athletic history. My family and I can’t wait to get to Morgantown to build relationships and help take Mountaineer Athletics to even greater heights.”
At North Texas, seven programs (men’s cross country, volleyball, women’s soccer, football, men’s basketball, women’s golf and softball) combined to win 17 conference or division championships during Baker’s tenure, and the overall athletic department’s winning percentage in the last year was the best in the modern era. In 2019, every team achieved a winning season for the first time in school history. He led 18 head coaching searches, and his hires have a combined winning percentage of nearly 70%.
UNT student-athletes excelled in the classroom under Baker’s leadership, posting top APR scores and setting four consecutive department Graduation Success Rate records. Every team recorded a cumulative GPA of 3.0 or higher with the Spring 2022 department GPA hitting a 3.206 average.
Baker also led record fundraising years at North Texas. The school registered its four best fundraising years in its history, and the overall top five largest gifts at UNT came under Baker’s leadership. He guided North Texas athletics to a school record for fundraising in a single year, nearly doubling the previous department record.
Ticket revenue increased by 125% under Baker, and football attendance grew by 71%, while men’s and women’s basketball crowds grew by more than 60%. Additional achievements at North Texas included a five-year strategic plan, new 20-year facilities master plan and lucrative contracts for multi-media rights, licensing, apparel and equipment.
Originally from Valliant, Oklahoma, Baker earned his bachelor's degree in education from Southeastern Oklahoma State in 2001 where he was a member of the honors program. He went on to earn his master's degree in education leadership from Oklahoma State in 2003. He and his wife, Heather, a Bokchito, Oklahoma, native, have two daughters, Addisyn and Reagan.
Baker begins his duties at WVU on Dec. 19 under a six-year agreement through Dec. 31, 2028, and will earn a yearly compensation of $1.1M, plus incentives.
WVU’s Directors of Athletics:
Anthony Chez - 1904-13
E.R. Sweetland – 1913-14
George Pyle – 1914-17
Harry Stansbury – 1917-38
Roy “Legs” Hawley – 1938-54
Robert “Red” Brown – 1954-72
Leland Byrd – 1972-78
Richard Martin – 1978-81
Fred Schaus – 1981-89
Ed Pastilong – 1989 - 2010
Oliver Luck – 2010-2014
Shane Lyons – 2014-22
Wren Baker – 2022-
Editor's Note: Photo shows Wren Baker in photo from North Texas Athletics YouTube channel.