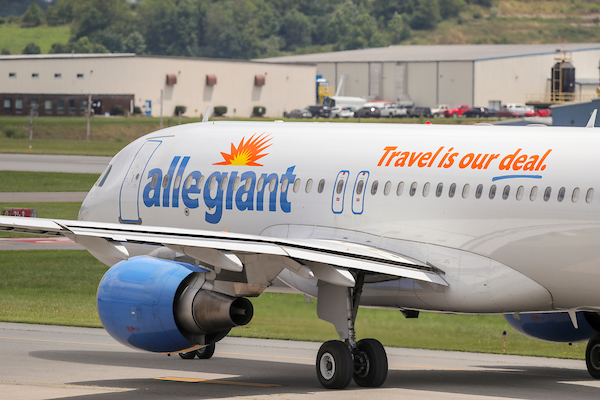 Rock said work on adding those flights, as well as others, have continued for years. He said talk on these two flights heated up in December.
“We really began the conversations about the expansion of services around Christmas time,” said Rock. “This time those conversations worked.”
Rock and others with the airport have tried for years now to land additional flights to destinations across the country. This time, it bore fruit as Allegiant listed dozens of new flights nationwide.
Allegiant announced 34 new nonstop routes across their networks today, and the Bridgeport flights that will be added to the current flight to Orlando and the upcoming flight to Myrtle Beach was included. Allegiant is offering one-way fares on the new routes as low as $39, which vary per location.
“We’re extremely pleased about the two new nonstop routes, which speak volumes about the confidence the airline has in the strength of our market during this unique time,” said Benedum Airport Authority President, Ernie VanGilder. “We thank Allegiant for providing our travelers with these great opportunities and look forward to great success.”
The flights to Destin begin May 26 and will be on Wednesday and Saturday. The flights to Chicago will begin June 3 and run Thursday and Sunday.
"As summer approaches, we expect a lot of pent-up demand for travel, especially for places where people can hike, fish, camp or visit the beach," said Drew Wells, Allegiant's senior vice president of revenue. "With this expansion, we've added even more service to destinations known for their outdoor appeal. Now, with Allegiant's low-cost, nonstop service, travelers will have easy, affordable access to the cities they want to visit."
Rock said the news is particularly good in light of the pandemic going on. He is hopeful numbers will trend in the right direction and people will feel comfortable with the safety precautions in place to get people a sense of comfort.
“Everyone needed good news and the airport, in partnership with Allegiant who we have such a great relationship with, is happy to provide it,” said Rock.
The airport also provides daily service to Washington, DC and to Chicago. That Chicago flight goes to O’Hare International.
“Chicago is a great town, and this destination flight will provide another opportunity to bring people from Chicago, particularly West Virginians, back home and take West Virginians to Chicago. It’s going to be a nice addition to the existing daily flight.”
Tickets are available now at allegiantair.com or by contacting your local travel agent. Visit the Web site for times and other details.