The face of the Bridgeport High School boys track and cross country programs has announced he will be stepping aside from both positions. Jon Griffith, who began his coaching journey with the Indians back in 1989, is done.
Griffith told Connect-Bridgeport he has informed the coaching staffs of both programs and the school’s administration he will not return. The veteran coach said that includes not coaching the 2021 boys track season that will start in a few months. 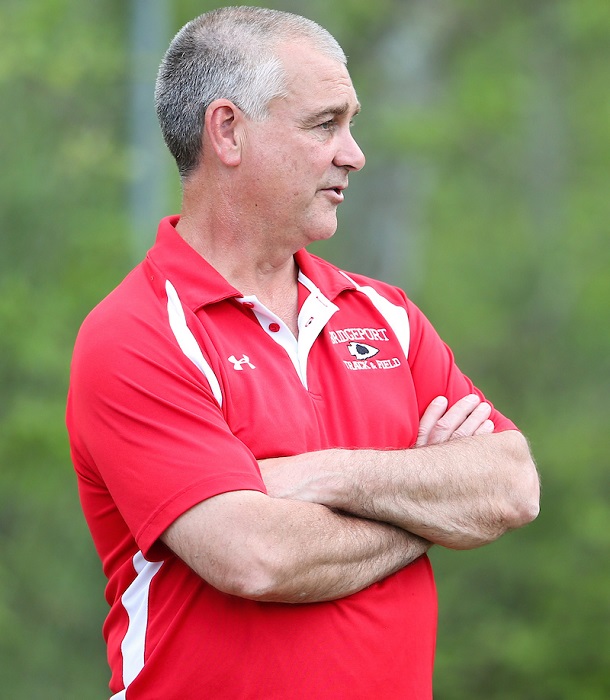 “I have finally decided to resign,” said Griffith.
When asked why, he paused to think about it.
“I guess a good place to start is that it has been three-plus decades,” Griffith said with a laugh. “Honestly, I can’t say for sure other than I’ve always heard they say you know when it’s time, and I guess it’s time.
“The pandemic hasn’t been the straw on this decision, but it also hasn’t helped any because you’re looking down another season of uncertainty,” he continued. “It amounted to just more turmoil. It was a rough cross country season and it looks if track happens that will be tough as well.”
The turmoil could amount to what happened in 2020 – the possibility of no track season. And for someone who puts as much time in as Griffith, it did not make, but helped shape, his decision.
“More than anything, in the last 10 years, I’ve gone five days a week almost all-year round; about 50 weeks,” said Griffith. “I don’t have to do that and I’m not complaining because that is my choice. But to know it may not happen for the time I’m putting in and all of the time those student-athletes are putting in, I just don’t know if I want deal with that situation.”
Now that he has stepped down, he will not be dealing with it. The shoes he is stepping down in are big ones that need to be filled in both programs.
Griffith started as an assistant track coach in 1989 by volunteering to help a program almost non-existent and with a cinder track. In 1990, he took over and slowly began a march toward dominance and state respectability. 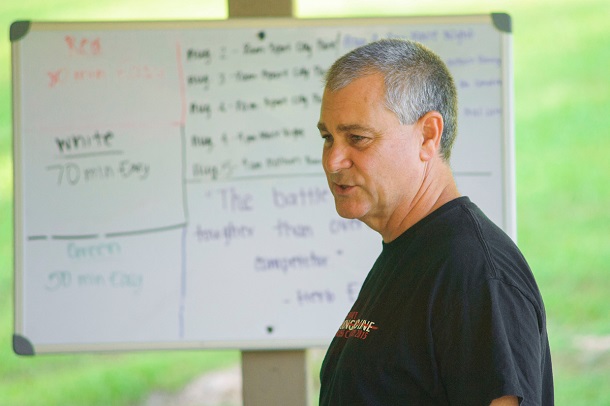 The same can be said about cross country. He took on an assistant job for the boys and girls in cross country in 2008 before assuming the head coaching role in 2010.
Success, it is safe to say, has followed. Between the three programs, Griffith has captured a whopping 49 Harrison County championships, 29 Big 10 championships, 24 regional titles and five state championships.
Griffith has been the coach of three state championship cross country teams for the boys, as well as two teams that finished runner-up. He also has a runner-up with the girls on their side of the cross country ledger.
The track team also became a state power. Griffith’s teams earned two state track championships. The boys also added a runner-up finish as well. He also played a key role in getting the Indians a six-lane, all-weather track led by a community group that has resulted in a facility that typically hosts several huge meets each year and provides revenue to fund the program.
“I got into coaching because my family is very competitive,” said Griffith, who also recently retired as a teacher. “Track and cross country, and even when I coached freshman football, was an outlet for the competitiveness I was raised with.
“I enjoyed more than the challenge of trying to win,” he continued. “I enjoyed the planning, the preparation, and thinking of how to give our student-athletes the best chance to win. I always enjoyed that. It kept me coming back.”
The kids also kept him coming back.
“Leaving the kids, that’s the hardest part. The kids here are special,” he said. “Working with the kids and families each year was always rewarding because I was lucky to always have great kids and families and usually a lot of great athletes to work with. The thing is, I enjoyed working with the special needs students and the kids that just came out who weren’t great athletes, but just wanted to be part of something. They were just as important to me and to what I wanted the program to achieve.”
Griffith said he does not plan to come back to assist whoever takes over the programs. He did say if it is one of his current assistants, he will be glad to offer consultation.
“Sometimes you don’t want to be that old guy hanging around or a pain in whoever’s side,” said Griffith. “What I do hope is that whoever takes over would be comfortable to call me if they think I can help them with anything. I also hope whoever follows will do better.”
That could be a tall order. Along with the state titles, Griffith has won coach of the year honors at the conference and state level, as well as regionally and nationally.
Editor's Note: Top photo shows Jon Griffith at a BHS track meet, while he's shown at an early-season practice in the bottom photo. Photos by Ben Queen Photography.

Sad to see Jon Griffith leaving. He has been a terrific coach and person. I have nothing but great respect and wish him well. To see him and John Cole move on in a few month span is a concern. Those are some big shoes to fill.