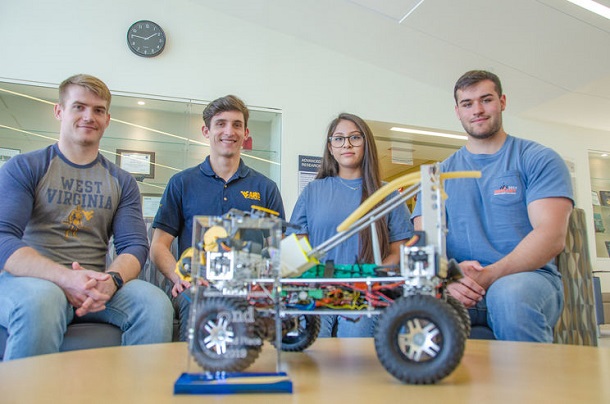 WVU Sharknado, created by computer science majors James Harrick from Morgantown and Jakob Heilman from Weirton, computer engineering majors Fares El Amine from Beirut, Lebanon and Michael Watkins from Pittsburgh, Pennsylvania, and electrical engineering major Laura Foster from Little Hocking, Ohio, finished fifth.
The competition challenges teams to design and create a robot capable of completing a remote mission. The robot must be controlled via the Internet from at least 50 miles away. Other universities competing included Oklahoma State, University of Oklahoma, University of Bogota, Columbia and Technologico de Monterrey from Mexico.
The mission includes navigation of a dark tunnel, capturing a ping pong ball, climbing and descending 30-degree inclines and launching the ball at a target. The robot must also demonstrate speed sprinting toward the finish line. Robots also needed to pass a loss of signal test, recognizing and acting accordingly when commands from the operator are lost.
“Our robot was designed with four, independently controlled and steered wheels in mind,” said Pallay, who served as team lead. “It had a robotic arm for picking up a payload and a slingshot for launching the payload, which was a ping pong ball. The robot was controlled entirely from our work station in the Senior Design lab here at WVU, where we drove the robot and controlled its arm and launcher.”
According to Pallay, the team had five minutes to set up the robot before the run and 10 minutes to complete the obstacle course. Points are deducted for wall collisions and if on-site teammates need to interact with or touch the robot.
Despite the team running out of time during the competition, the robot still scored second-highest, resulting in a second-place finish.
WVU Sharknado suffered veered off course and ran over a huge timer found on the competition floor and flipped it over.
“This unplugged the battery and shut off the LattePanda, which is a single board computer that runs a full version of Windows 10,” explained Foster, team lead. “We tried to get it restarted but there wasn't enough time left.”
“I am very proud of our students’ accomplishments,” said Klinkhachorn. “The team members exchanged ideas, helped each other and worked very hard, all semester long to build better robots.  They were able to put what they have learned in theory into a practical, working robot. They represented our program and our University with pride. I’d also like to thank the Lane Department for its generous financial support of the teams.”
WVU has a record of success in the event, finishing second twice, third twice and winning the Best Design Award. This is the final year of the competition.
Editor's Note: Pictured, from left are, Sean Kreps, Troy Pallay, Mirella Vargas Quispe and Vincent Cutlip. Photo courtesy of WVU Today.