Each year, the names that are released prove to be among the biggest names not only in Bridgeport High School, but they have become synonymous with some of the biggest names in the city as well. And as you read the names below you won’t be surprised they are about to be recognized as among the best to ever walk the halls at BHS.
Earlier this month, The Bridgeport High School Alumni & Friends Foundation, Inc. announced its 2019 Hall of Fame Class of inductees. And you may recognize one or all three of this year’s selections.
The group includes Michael Walker, Dr. Harry M. “Hank” Murray and Dr. Roberta Atha Strosnider. All three selections this year are

graduates of Bridgeport High School.
The trio will be honored at a dinner in their honor Oct. 26, 2019 at the Bridgeport Conference Center. Ticket information will be announced when it becomes available.
“First of all, the selections are a result of nominations we’ve received from the Bridgeport community here and beyond,” said Alumni & Friends board member Chuck Steele. “This year’s selections are highly recommended by that community.
“Looking at this year’s class, we’re absolutely pleased with it,” he continued. “This is a rare year where we’re recognizing three members instead of four and we’ll see how the dinner flows in terms of length. It will be nice honoring those that have contributed greatly to the name of Bridgeport.”
Walker is one of the youngest members chosen as part of the exclusive group. The 2005 graduate also has credentials few can match.
While most know of his success swimming as a youth all the way to a state champion at BHS, Walker went on to earn All-American status as a swimmer at West Virginia University. However, his crowning achievement is that he became a 2008 Olympic trial qualifier in the 200 breast, 200 IM and 400 IM events. 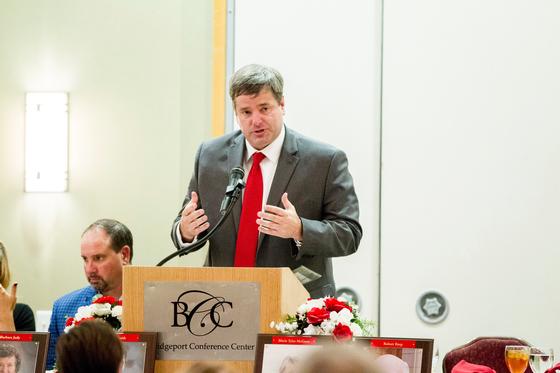 Since leaving the sport as a competitor, he’s entered into coaching. Most notable is his time spent as the head coach of the Guatemalan National Swim Team and the coach for Olympian Gisela Morales among many other accomplishments. Today, he is an assistant coach at the University of Delaware.
“Michael represents the younger generation that our group is trying to encourage for nominations from the community for the Hall of Fame,” said Steele. “His accomplishments both locally, nationally and internationally in the sports of swimming is impressive. Michael’s addition brings a different, and welcome, flavor to the Hall of Fame.”
Murray is a 1971 graduate of Bridgeport High School. Since then, his academic journey took him to West Virginia Wesleyan and eventually the Southern College of Optometry. After that, he joined his father Harry M. Murray Jr. O.D. where they formed a practice and worked together for 25 years.
The professional career of Murray in Bridgeport spans 31 years, but he’s not relegated himself to just his doctor’s office. Murray has served on many fronts, including the Bridgeport Library Board of Trustees for 19 years where he helped lead the drive to land funding that paved the way for the new library on Johnson Avenue.
Murray, who is the only selection currently a city resident, has also been a member of Council and the City Recorder at various times since 1997. He is also a 30-year member of the Bridgeport Rotary Club, on the Burnside Foundation Board of Trustees and a founding member of the Alumni & Friends Foundation Hall of Fame.
“Everyone knows Hank as a community stalwart around here based on being active on City Council, the library board and a number of other groups and organizations,” said Alumni & Friends Board member Chuck Steele. “He’s a true Bridgeport icon.”
Strosnider, a 1963 graduate of BHS, currently is of Naples, FL., and Holly Springs, NC. Her selection is based on having a huge impact on the field of education.
Her formal education beyond high school began at Radford College and then she went to Fairmont State College (now University) where she earned a degree in Secondary Education with a major in Social Studies.
It was the beginning of a long and still ongoing career in the education field. A few of her achievements include earning her master’s degree in Special Education from West Virginia University in 1972. It was in the field of special education where she made her mark and continued her studies in various programs and a number of schools; teaching along the way. Strosnider eventually authored books and papers and made presentations on her studies at the national and international level. It was just part of a career that had – and continues to have – a profound impact on those being taught and those teaching.
“Roberta Strosnider has made her mark in a number of fields. She had her background in education and a really diverse background in respect to service and education,” said Steele. “She’s a very accomplished person on so many levels.”
More on all three candidates will be featured in the months ahead on Connect-Bridgeport.
2018
Laura Aliff
Alan Dye
Jane Riley
Norman Tolley
2017
Barbara Judy
Bob Reep
Marie Tyler-McGraw
Paul Smith
2016
Hugh Gainer
John Ebert
Marilyn McClure-Demers
Walter Barth
2015
Dr. Michael Hess
Mary E. Reppert
Nancy Camp Jacobs
Phil "Sonny" Nicewarner
2014
Curtis Fleming
Dan McNamee
Jim McDonald
Pam Hotsinpiller
2013
John Cecil Murphy
Julia Jarvis
Lindy Bennett
Marcia and John Conley
2012
Alice Rowe
Janice Lough Warder
Tom Mace
Wayne Jamison
2011
Bill McCartney
Doug Van Scoy
Mike Corder
Mike Martin
Woody Thrasher
2010
Christine Chiodo
Dr. Kelly Nelson
Dr. Robert Hess
Lt. Col. Curt Burner
2009
David Alvarez
Joseph Manchin Jr.
Stephanie Chang
2008
Charity Nelson Johnson
Harry L. Green Jr.
James W. Frush Sr.
Steve and Linda Williams
2007
Dr. John H. Lodge
Maxine Moose Bruhns
William Dunkin Lodge
Editor's Note: Top photo is of the Hall of Fame wall at Bridgeport High School, while Alumni & Friends board member Chuck Steele talks during the 2017 banquet.