When the pandemic forced teaching to move online and everyone to stay indoors this past spring, WV Wesleyan College professor Dr. Greg Popovich, a Bridgeport native and 1991 BHS graduate, decided it was an opportunity for self-improvement and personal growth. 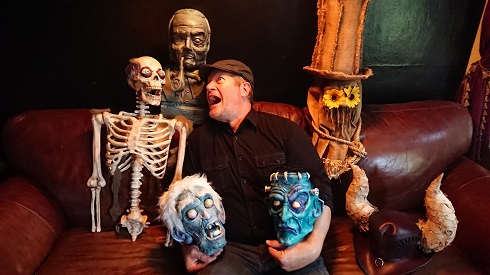 Although he had completed four years of art classes in high school complemented by weekend lessons with local artist Blaine Berkley, his career as a physical therapist and professor had permitted only occasional brushes with his artistic past.
“I would produce perhaps a painting each year, but I had always limited myself to operating within a two-dimensional medium such as acrylics on canvas,” he said.
But, time on his hands, a new airbrush he’d been given by his girlfriend and fresh paints from his daughter got his creative juices flowing. When he stumbled upon children’s foam clay on clearance at a craft store, he decided how he would put his new airbrush to use: He would try his hand at bringing fun sculptures to life.
When it came to deciding upon subject matter, he reasoned, “You cannot force art. I wanted to tackle something fun and ambitious that I was very enthusiastic about.” That “something” turned out to be creepy creatures to serve as yard props for Halloween.
As far as the sculpting is concerned, it felt very natural. 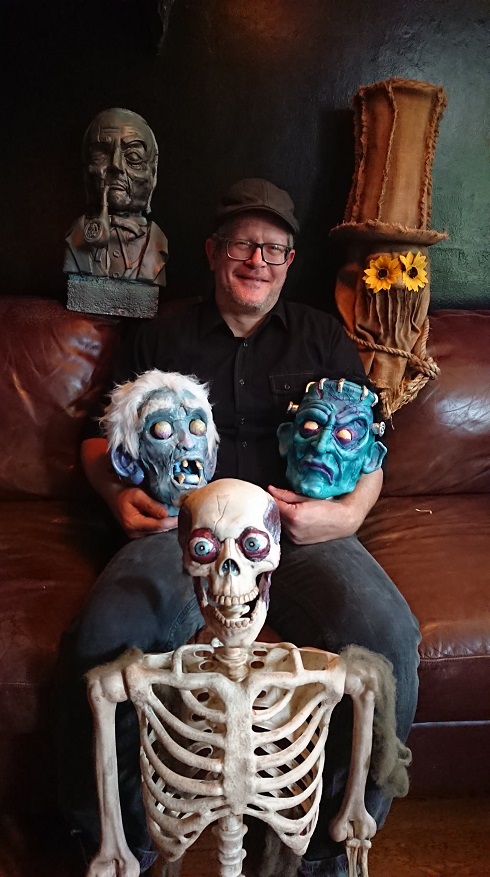 “Because I was working with foam clay that air dries relatively quickly and does not lend itself to carving details, the pieces needed to be produced relatively quickly," Popovich said. "Sculpting the clay over a Styrofoam wig form generally took less than two hours. I do feel having a background in anatomy assisted in getting some of the features to look believable, even if cartoonish.”
One of the pleasant surprises that came with sculpting was the revelation that very little time needs to be devoted to shading and highlights because the sculpture does most of that for you. In contrast, painting on a flat canvas can demand a lot of time and effort conveying that kind of realism.
These creations are economical, beginning with Crayola Model Magic (an air-dry lightweight clay) and a Styrofoam wig form. First, the clay is shaped over the foam head. Because of its rubbery nature, pieces may be shaped by pushing the clay into place. Wrinkles and facial contours may be achieved by first rolling the clay into large “worms” before application.
For the clothes on one bust, Popovich first rolled out the clay with a rolling pin and then cut the shape of the clothes with scissors before draping them over the bust. Ears may be made individually, dried while being cradled to maintain shape, and glued in place later. After allowing the clay to dry for one to two days, he seals any cracks that appear with caulk.
Next, he applies outdoor latex house paint (diluted with water if airbrushing) or spray paint. For eyeballs, he uses five-minute epoxy for an extra glossy, wet appearance when desired. When called for, teeth may be made out of epoxy putty and painted. Any tufts of hair are faux fur simply hot-glued in place. Because these are intended to be seasonal outdoor props, all characters receive a coat of water-based Liquitex varnish for extra protection. All of these materials are widely available between craft and hardware stores.
Although his initial intention was to bring personality to his front yard during Halloween, some of his props have now been seen by a much broader audience. “Dr. Greg,” as he is known to his students, recently completed a presentation for the Zombie Apocalypse Medicine Meeting (ZAMM) based at Arizona State University. His virtual presentation entitled “Why Zombies Crave Brains: An Exploration of Two Hypotheses” allowed for a happy marriage of his interests in science and the macabre. And, some of his props—including a full-size sarcophagus and crematorium-- were streamed across the Internet during his talk.
“I find creating to be deeply therapeutic. Research shows that to create something with the hands is a powerful anti-depressant, which is important during times of forced solitude as experienced during the pandemic. I’m very happy that passersby have taken an interest in the creations in our yard haunt,” he said. 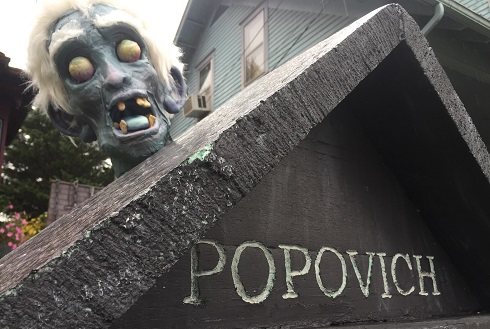 When asked if he intended to sell any of his creation sensations, Greg replied with a laugh, “Ever since high school, my art has always been something deeply personal, so I don’t think I could part with any of it. It would be like selling one of my children.”
With Halloween fast approaching, Dr. Greg already has his sights set on Christmas.
“Expect a spooky, spirited Christmas season!” he said.