He earned the respect of his teachers at Bridgeport High School and named Mr. BHS. He has spoken before the West Virginia Legislature while still at BHS on a bill impacting students with disabilities. He has been honored for his activism for individuals with disabilities by earning the James T. Neubacher Award during his current time at the University of Michigan.
So, it probably comes as no surprise that 2019 BHS graduate Vincent Pinti participated in this morning’s segment of Good Morning America 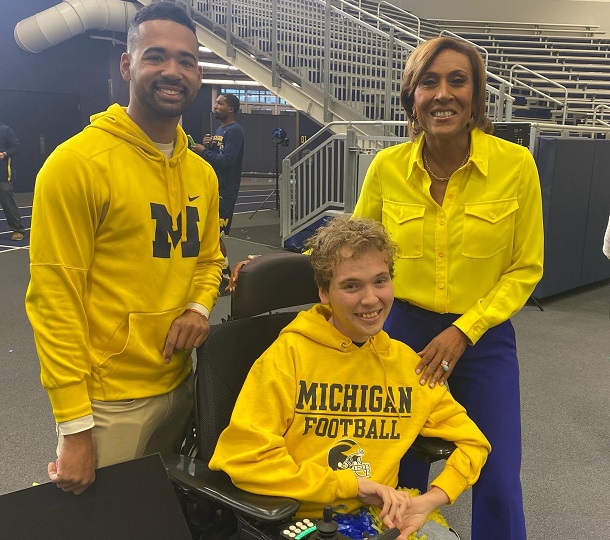 that came to Ann Arbor. While they were not there for Pinti, the show was on hand to present a professor at the university Pinti works with on a multitude of disability related project with a prestigious Craig H. Neilsen Foundation Grant.
The grant awarded to Dr. Oluwaferanmi Okanlami, or Dr. O as Pinti and others call him, was for $1 million. The grant was for Michigan’s Disability Services and Adaptive Sports programs that Dr. O heads up as the director.
Pinti, who was born with Spinal Muscular Atrophy, works regularly with Dr. O on a multitude of projects to make the University user friendly for those disabilities, while also creating opportunities for students battling issues as well.
“I was actually on a couple of soundbites here and there and really happy to be part of the production,” said Pinti, who will graduate as part of the Class of 2023 with honors in Political Science, Spanish, and English. “What was more exciting and made me happier was that it was for Dr. O.”
Like Pinti, Oluwaferanmi Okanlami – whose family immigrated here from Nigeria – is in a wheelchair. However, he was not born with a condition that put him there as Pinti said he was injured in a swimming incident. And he has become a mentor for Pinti, despite not taking 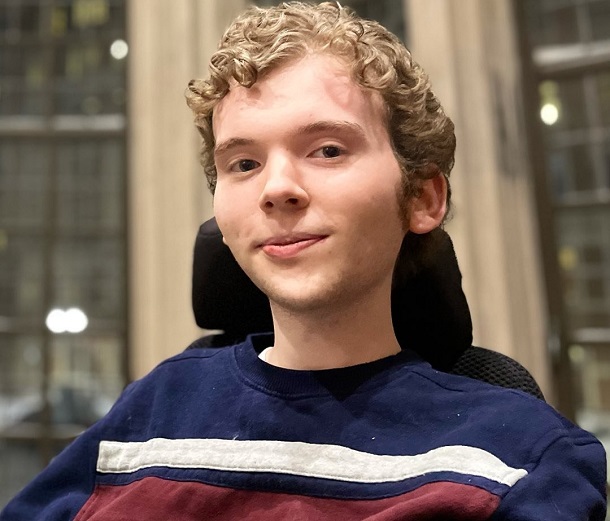 any classes from him, as the two have failed to let their situations stop them from making a difference. They were able to work together thanks to Pinti’s activism as a student in Ann Arbor.
“If you know Dr. O, it was an honor and a surprise to be able to speak about him to a national audience,” said Pinti.
Dr. O, according to Pinti, has been integral in setting up the University’s adaptive sports program. A former Division I track athlete at Stanford before his injury, Okanlami is now a Paralympian and one of the best in the world at tennis.
“There are a number of students in wheelchairs here that, like Dr. O, are Paralympians and play a number of sports that is aided through the adaptive sports program,” said Pinti. “He’s the reason for it, and he’s making a difference.”
Now, thanks to a $1 million grant, it will be even easier. Pinti said Dr. O works on numerous projects many do not see or hear about, and he has been glad to assist.
“There are several programs, including recently working with him where we offer student care givers scholarships through the submission 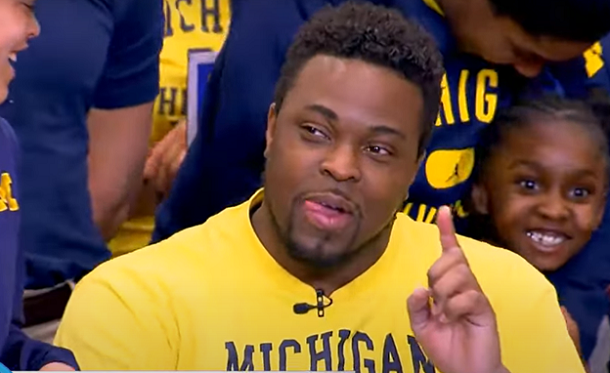 of essays and interviews,” said Pinti. “We are awarding two $1,500 scholarships along with setting up a database of caregivers to help those with disabilities and even the older folks in the community. This could go a long way to helping people and getting people more experience to be able to help.”
While Vincent knew about Good Morning America coming, Dr. O did not. He said he had to keep it a secret for the last two weeks.
“We snuck in on him at a (sports) practice today, and it was a huge surprise,” said Pinti. “It is well deserved because he is an all-around strong advocate for those with disabilities.
“I am inspired by him to keep pushing. He lets me know if you keep your head down and work hard, advocate for yourself and others, it will make a difference and someone will notice,” Pinti continued. “You will get a pat on the back, and someone will notice.”
Today, Pinti was part of a $1 million pat on the back. And he could not be happier about it.
“That’s a lot of money,” said Pinti with a laugh. “Dr. O will put it to good use.”
Editor’s Note: Photo shows Vincent Pinti with his personal care assistant Gianni Walker, who graduated from Michigan in 2021 and getting ready to apply for medical school, and Good Morning American’s Robin Roberts and a profile shot of Pinti in the middle.  Dr. Oluwaferanmi Okanlami is shown in a screen shot from this morning's segment below.