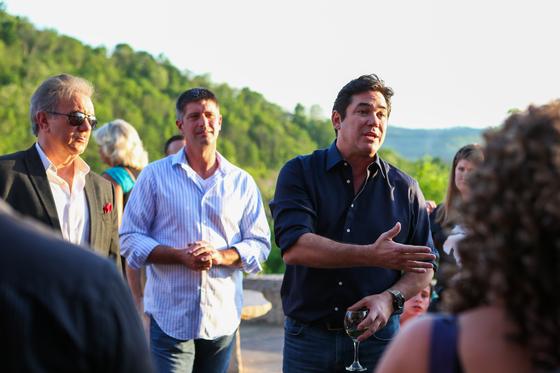 After filming a few scenes for "Megan's Christmas Miracle" in Bridgeport, JC Films returned and filmed two other movies: "A Promise to Astrid," which premiered this week at Bridgeport United Methodist Church, and "A Child of the King," which wraps up shooting this evening.
Each project of JC Films delivers an inspiring message and many are featured at churches across the country.
Next up is "Zombie High School," a passion project of JC Films President Jason Campbell. The message behind this one is: Don't be a bully or tolerate a bully, but rather find a way to get along with everyone. Campbell is always excited to see his projects come together, but is particularly excited about this one. He plans to place the movie in the hands of anyone to whom it might speak. To educate people about the film, a reception was held at Wonder Bar Steak House Wednesday, May 8. Dean Cain, who stars in many JC Films projects, spoke about the movie and why he believes in it. Superintendent of Harrison County Schools Dr. Mark Manchin also delivered a few words as to why he is behind the movie 100 percent and proud to see it made here in Harrison County. Several in attendance made financial contributions toward the project. Anyone else who would like to get on board can donate HERE. See photos by Joe Signorelli of Ben Queen Phography at the gallery below.
Auditions for "Zombie High School" are today, 10 a.m. through 2 p.m. at Bridgeport Middle School. There will be about 50 young people, age 13 through 20, cast for the film, as well as 20 adults (age 35-55). For more information about auditions, click HERE.
Editor's Note: Pictured are Superintendent of Harrison County Schools Dr. Mark Manchin, JC Films President Jason Campbell and actor Dean Cain who stars in many JC Films, including "Zombie High School."