Book Review: The Girl on the Train

The situation gets loco on this locomotive! The Girl on the Train flew by, a rush of pages bearing a cargo of action and suspense. While 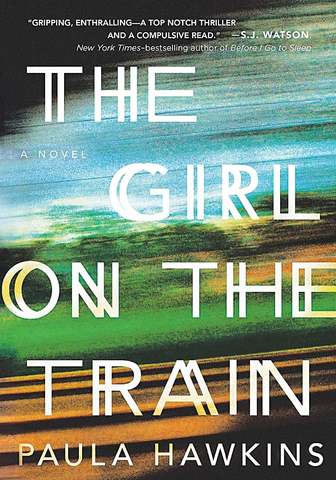 this story can sometimes go off the tracks, it chugs along anyways, lugging behind it millions of infatuated readers.
I managed to escape the hype before reading this book. As a result, my expectations were low, my limited knowledge of it being that the movie version would be released on October 7.  “How can a train ride be interesting?” I asked myself. The only entertainment that ever made trains fun to me was Thomas the Train. Fortunately, a woman vanishes relatively early in the story. A mystery that puzzles the media, the police, and the entire world commences.
Rachel Watson frequently gazes out the window during her daily commute and has developed a connection with a particular house, even giving those who live within fake names---Jason and Jess. Rachel builds her own reality for these characters, giving them everything she no longer had---a happy marriage. Divorced two years ago, she is still recovering from the carnage, battling mental instability and alcoholism. The lives of Jason and Jess are one of Rachel’s ways of forgetting her lost love. The course of a morning tears away her only non-alcoholic coping mechanism.
From the vantage point of the train, Rachel sees Jess kissing a man that isn’t Jason. Rachel is shattered by this betrayal, remembering when she herself had been cheated on by her former husband. Her idealized perception of the passerby couple becomes bitter in her mind. How could she feel any worse? With a headline, apparently. Not much later, Jess is on the front page of the newspaper, her actual name being Megan Hipwell. Megan has disappeared without a trace.
Having been fired from her job months beforehand, Rachel is desperate for something to do. She throws herself into the case. Unbeknownst to Rachel, she is stepping into a minefield, every move forward chancing explosion. Readers are drawn into the conflict, sharing Rachel’s intrigue into the missing Megan. The suspects are limited. Could it be Rachel herself? After a blackout drinking session, she roamed the very street which Megan was last seen on the very night she disappeared.
This temporary amnesia is convenient for the plot, but annoyed me as a reader. It seemed an easy-out for the author, a way to force mystery into the story with little effort. Of course the main character would be at the scene-of-crime during the time-of-crime. Of course the main character would be unable to remember anything about it. She was drunk.
Danger threatens to spring on the reader at every paragraph. The book’s ominous tone is present till the last sentence. Offering (usually only mentally) tortured characters, thrills with each turn, and central themes of darkness, The Girl on the Train has no respite for nerves.
A common complaint about this book is how unlikable the characters are. They all have unfaltering flaws, and there are few moments where the fictional people actually have an upbeat interaction. There is no comic relief; not much joy. And why should there be? This story is an excerpt from the darkness moments of the characters’ lives. Everyone has experienced things they would rather forget. Literature makes no allowance for forgetfulness (except for Rachel’s conveniently-placed temporary amnesia). The words set on paper last for eternity. You will not leave this book feeling elation. But does this degrade the writing’s quality? Does this diminish the readability of the story? I think not.
Just like the characters within, The Girl on the Train has flaws. Some of them gnawed at my attention, blocking my immersion into the plot. Still, I’m glad I was a passenger on this train. Just be warned, this book can cause quite the freight!