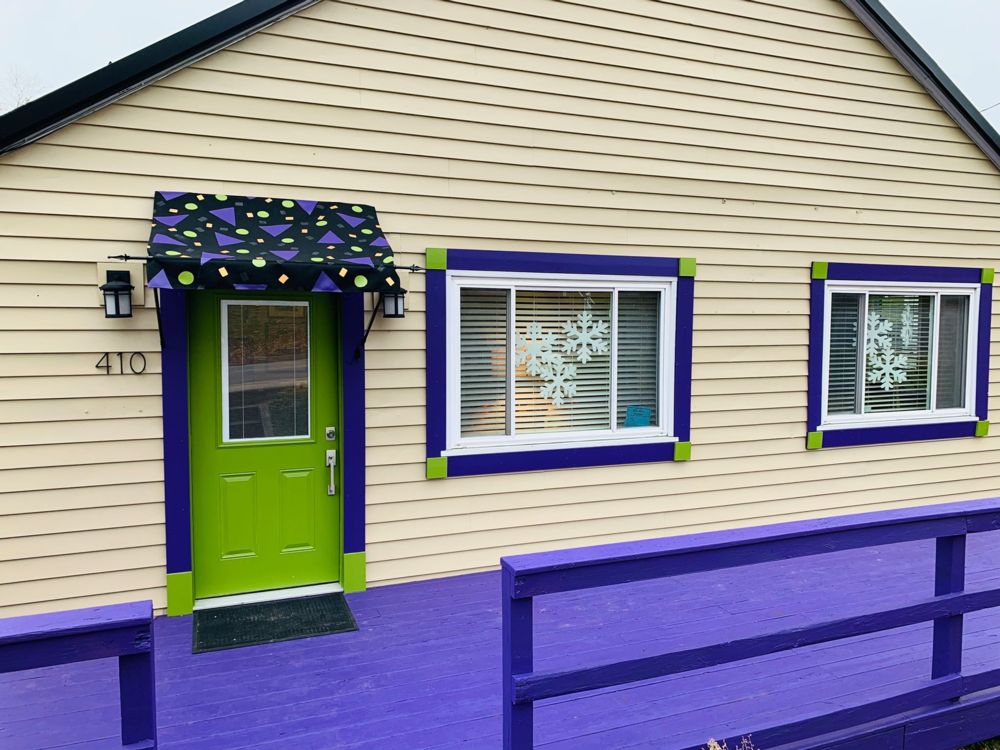 Just 50 days since a fire consumed her former store, Lotus MacDowell will reopen her custom framing and gift shop, Artworks.
Smaller than her former space in the Shoppes of Averil Place on South Virginia Avenue, a little East Main Street house has been transformed to feature the store's signature style, funk and color palette. MacDowell - whose unique business has been part of the community for more than three decades - said she and her longtime employees believe they will feel right at home at the new shop.
The eye-catching exterior is dressed in Artworks' purple and green color scheme. Entering the new storefront, one finds the perfect balance of whimsy and class; each nook and cranny filled with gift treasures. 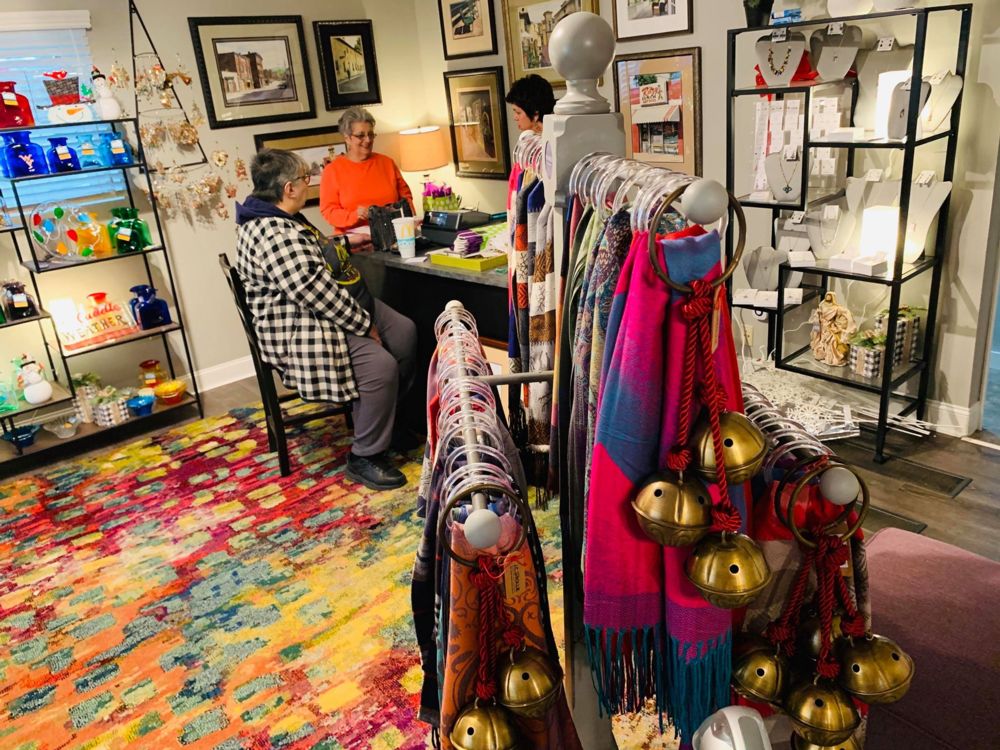 Jewelry and scarves, glassware and pottery, pillows and various home décor; some pieces featuring holiday themes are found throughout five rooms of recently-renovated space, which MacDowell feels will serve customers well.
“I think we’ll get some good visibility here right along Main Street,” she said, adding that it was important to her to be up and running by the holiday gift-purchasing season.
Shoppers will find new collections of some of Artworks’ trusted suppliers. There are some new lines, too.
A couple items which MacDowell pointed out were the new collection of lighted snow globes 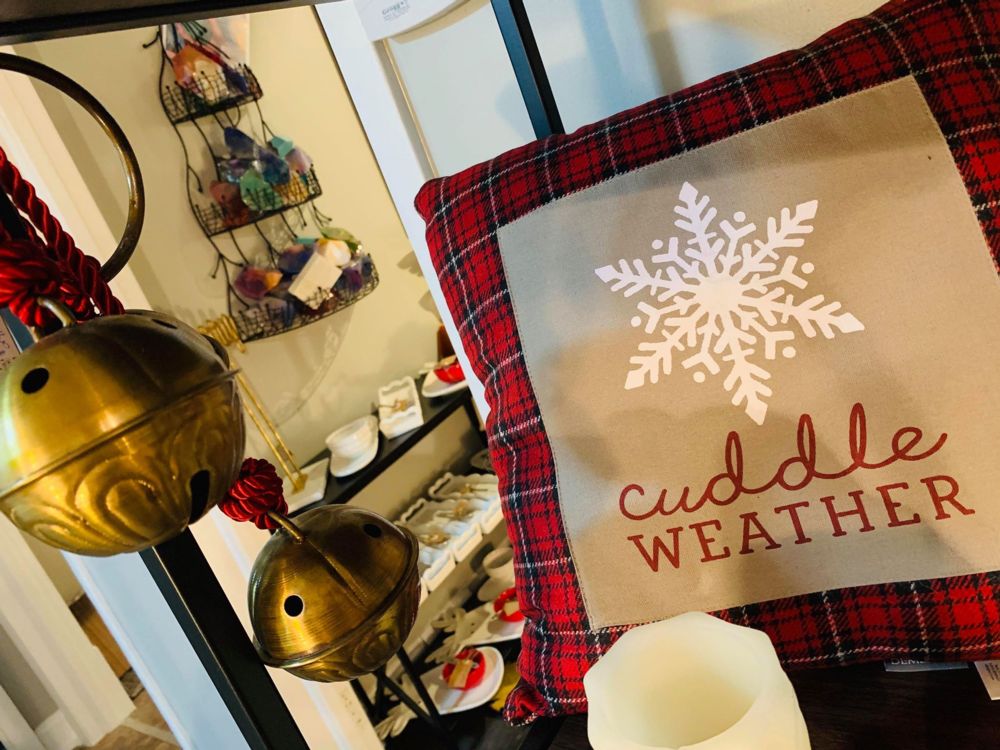 and Artworks’ own West Virginia Christmas ornament.
“We designed it ourselves and it was made exclusively for us,” she said. “It makes a great gift for people from West Virginia who have now moved away.”
In addition to art and gift items, Artworks is known for its custom-framing service, which continues at the new location.
Starting Friday, the store will be open 9:30 a.m. through 5:30 p.m. every day except Sunday.
Artworks is located at 410 East Main Street, just beside Mountain State Car Wash. There is parking behind the store and easy access from the parking lot to the entrance.
HempWorks, which was also housed in the Shoppes of Averil Place building on South Virginia Avenue, is now located at 362 East Main Street, just a few doors down from Artworks. HempWorks carries various CBD products. (Read more HERE.)
All photos were taken at the new Artworks location. 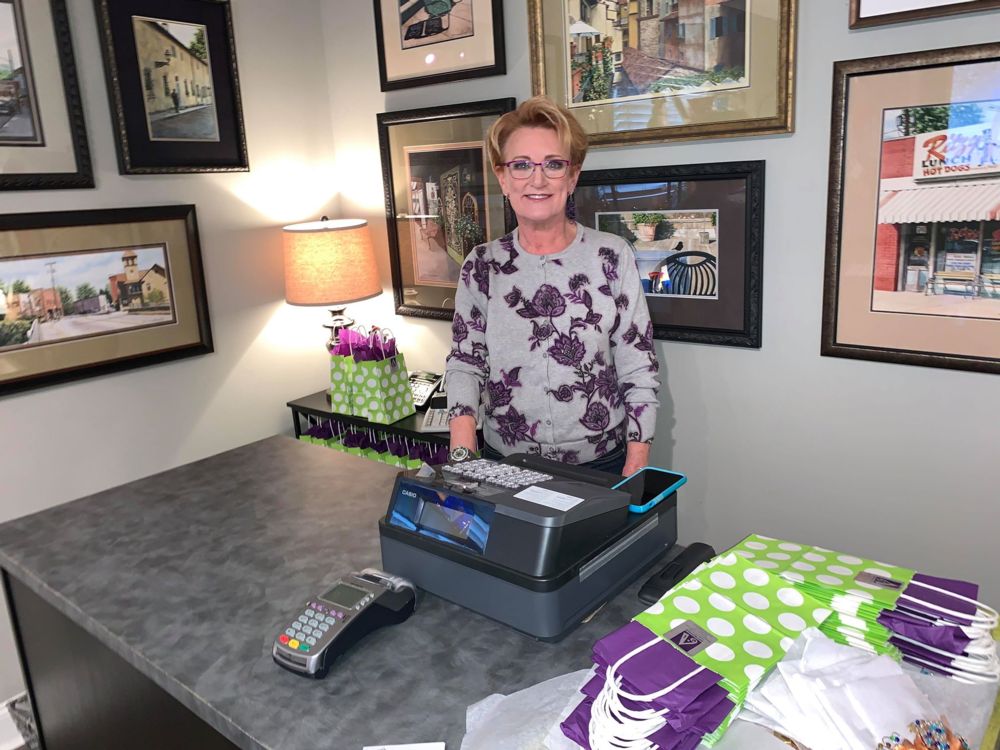 For more information about Artworks and the early-October fire, read this "It's Happening" blog which was published to Connect-Bridgeport on Oct. 22:
On Oct. 3, The Shoppes of Averil Place, established by Lotus Averil MacDowell, erupted in flames and was declared a total loss.
I had the opportunity to talk with Lotus the other day and was inspired by her positive attitude and ambition to reopen her store Artworks, a custom framing and gift shop that has been part of our community for 32 years.
She said it was quite eerie to walk into the South Virginia Avenue store, once popping with bright colors, and see it black, charred and smelling of smoke. She was able to salvage a couple custom framing orders, but lost others – mementos that locals had brought in to be framed and preserved. All the framing equipment was lost, as well. An 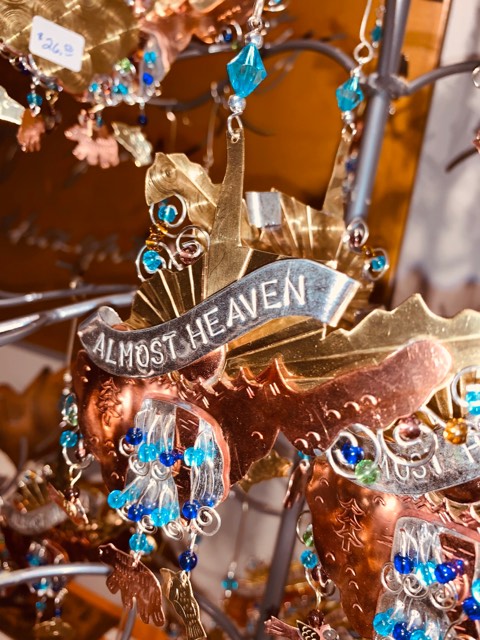 accomplished artist, Lotus also lost some of her original watercolor works.
“There was one of the new Robinson Grand and The 212 Pub,” she said. “And I had just finished a commission piece and the guy hadn’t even seen it yet.”
Still, the business owner looks on the bright side.
“Fortunately, the majority of my work wasn’t in the store because I had just done a show, so they were at my house,” she said. “And as for custom framing work, we were between jobs, so we didn’t have as many as we usually do. We will make it right with those who lost items, but everybody has been so nice to us and so understanding.”
Lotus watched the building burn. She had been on her way to an 8 a.m. appointment when she received a call from her ex-husband Woody Thrasher, telling her the building was on fire. He had been informed through Drew Pomeroy who noticed smoke while taking his little boy to school and called 911.
“I got there immediately and there was so much smoke and 30 seconds later, a blaze broke out,” she said.
The 40-year-old building, formerly occupied by Four Seasons gift shop, was a pole-built one.
“That barn wood was like kinder and burned fast,” she said.
The Shoppes of Averil Place also included HempWorks, Mary Francis Smith’s CBD and coffee shop, and Anne Hart’s Provence Market and Café. HempWorks lost everything. Provence, located in a portion of the building that had been added on to the original structure, was for the most part protected by a fire wall. The wine inventory was lost to smoke and water damage. 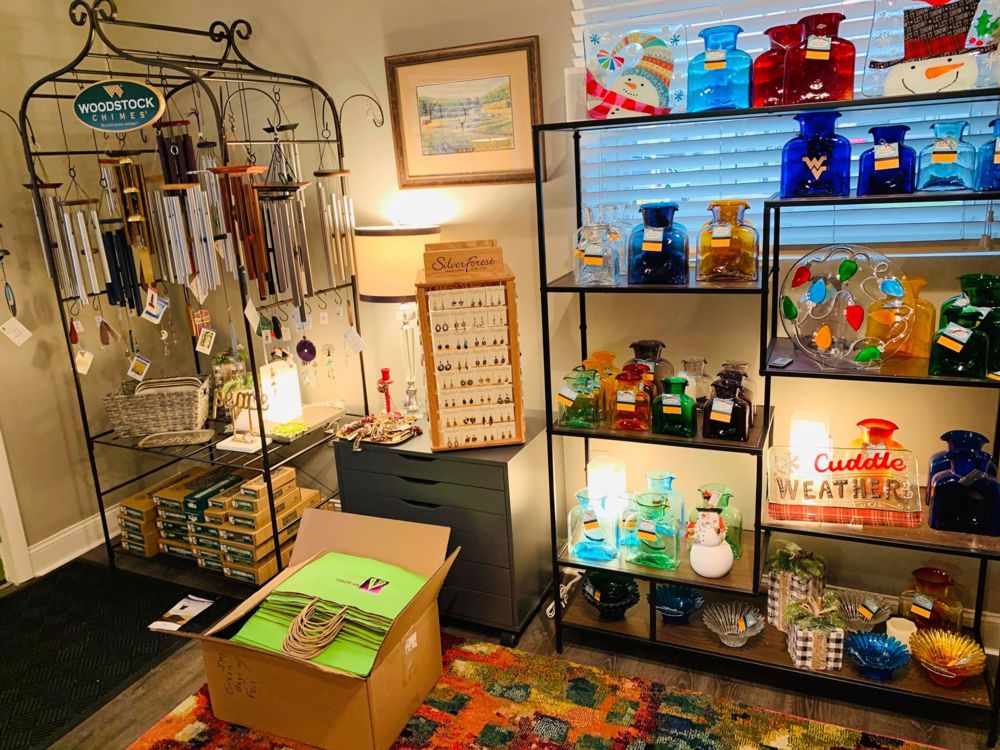 Bridgeport Fire Chief Phil Hart said the cause of the fire has not officially been declared, but Lotus said the state fire marshal is close to making a determination. Thought from the get-go to be an electrical fire, she suspected it was probably a bad outlet. But that likely isn’t the case.
“The state fire marshal and some insurance inspectors came in last week and they are leaning toward the fire starting from two little refrigerators that had been in HempWorks,” she said. “They caused a spark that went up the wall and across the roof. They were brand new identical refrigerators and were installed correctly, out from the wall like they should have been.” 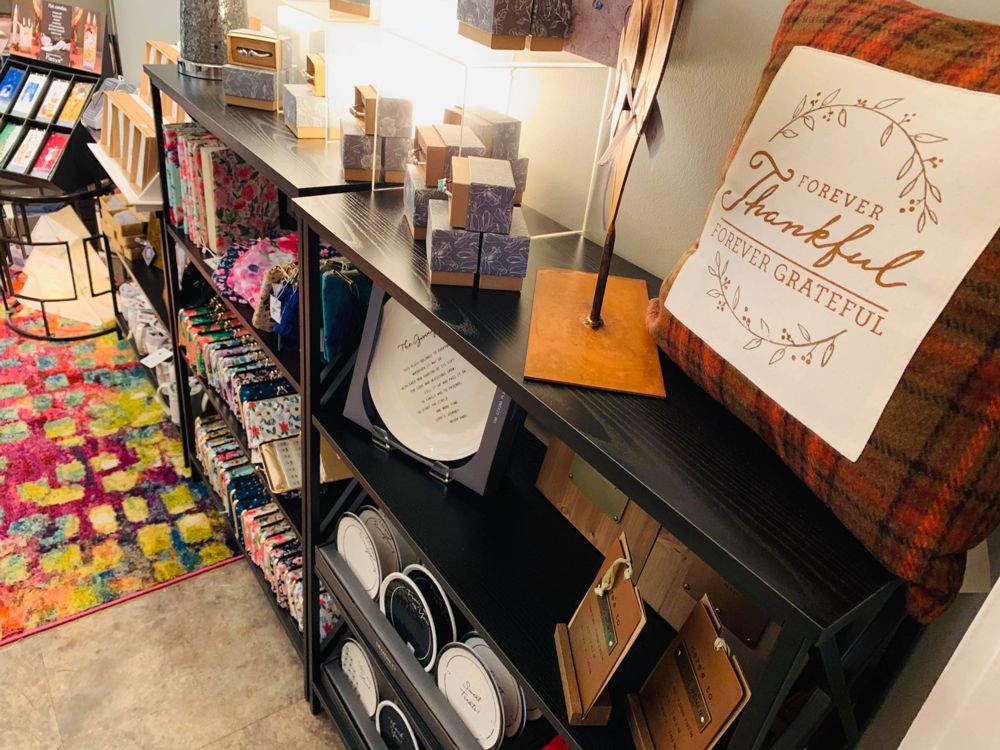 But from the ashes has come a new beginning. One of the only other items salvaged from the fire was the computer hard drive, which contained a lot of important information. In addition, Lotus and her employees put their heads together to remember and assemble a list of items that had been displayed and stocked for purchase.
By early November, Artworks will temporarily open at 410 East Main Street.
“We’re renting a little yellow house beside the car wash,” Lotus said. “I actually used to own it and sold it to Dave Reep. He had it on the market, but he took it off to let us rent it.” 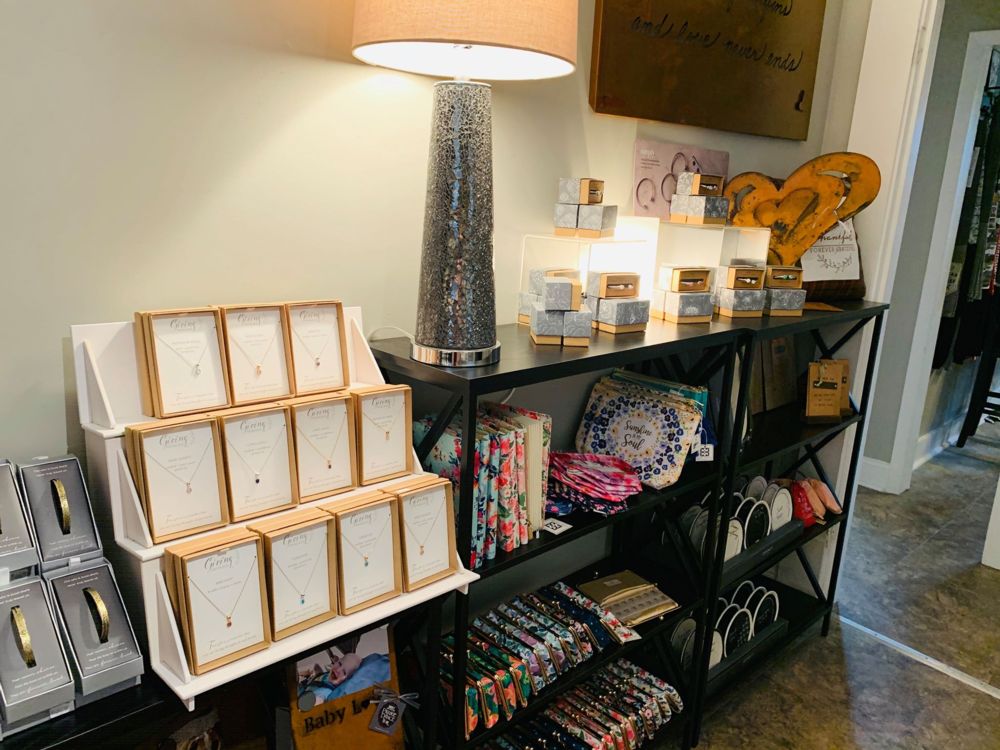 The store is considerably smaller than the previous one.
“We’ll have 850 square feet and we had 2,200 square feet in the (Virginia Avenue) building,” Lotus said. “But this is a chance to get back in there, start up again and reinvent ourselves. Items that weren’t effective cost wise will be eliminated. We’ll start out with a new slate of display units.”
The custom framework – Artworks’ specialty niche - will continue and the store will still feature gift items, accessories, jewelry, WVU-themed and other items, many crafted by area artisans.
“We’ll have some fantastic stuff,” Lotus said. “Our vendors have been wonderful to us. My home garage is full of some really neat things. People know us for unique gifts and we’ll still accommodate 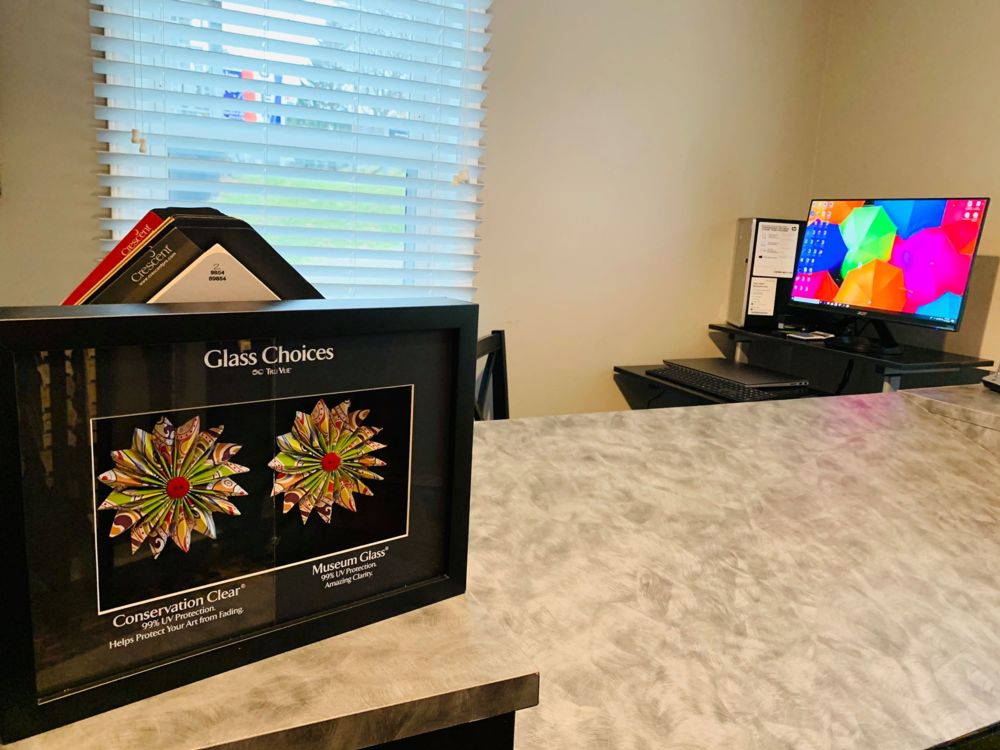 you.”
Included in the new inventory will be Christmas items, including a limited-edition West Virginia ornament, specially designed by Lotus and her team.
“It came in the day after the fire,” she said.
It was difficult to see The Shoppes of Averil Place burn, but Lotus said it could have been so much worse. Had the flames broke out in the middle of the night and gone unnoticed even for moments, the blaze could have spread via dry ground to the nearby Rosewood Heights housing development. The fire was contained to the one structure and no one was injured. And for that,she is very thankful, she said. 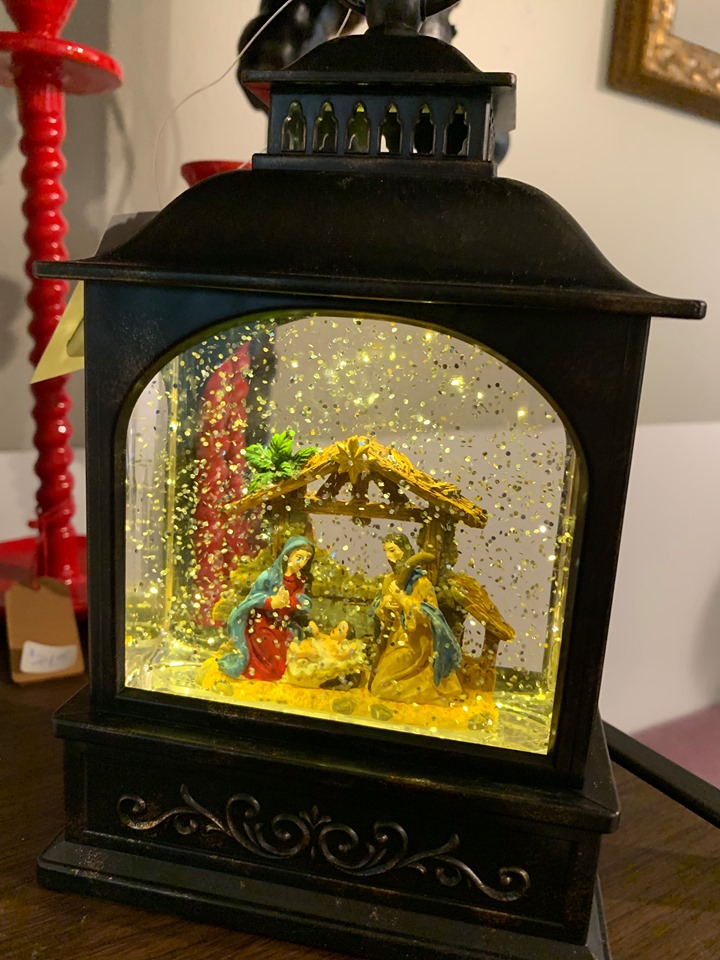 She is also grateful for the outpouring of love and concern she has received. It’s just one more example of how our town pulls together when misfortune strikes.
“I think that’s one of the great things about a small community. People do band together and try to help each other out,” she said.
I asked Lotus if there is anything people can do at this time to help and her answer was this:
“Come down and support our shop when we get started again,” she said. “A retail business is the life and soul of a downtown area. It’s so important for people to shop small, enhancing their neighborhoods and putting tax dollars back into their community.”
Some of Lotus’s employees have been with her 15 to 20 years.
“That’s a long time. We’re like family,” she said. “We’re excited about moving forward and creating this new place. I think, for us, this starts the healing process. We’re investing our energy - not in being down about what happened – but being positive and going forward. It’s easier to get through the trauma of losing everything.”
Lotus does miss Artworks, the large front porch with the rocking chairs, and the whimsical interior.
“It was weird walking in and seeing it all burned and covered with soot,” she said. “I sometimes dream about it – walking into the door and seeing all the colors. At least I still remember it that way.”