Bridgeport Middle School seventh grade student Gretchen Lang knew she wanted to give back to the community during the fight against the COVID-19 pandemic. 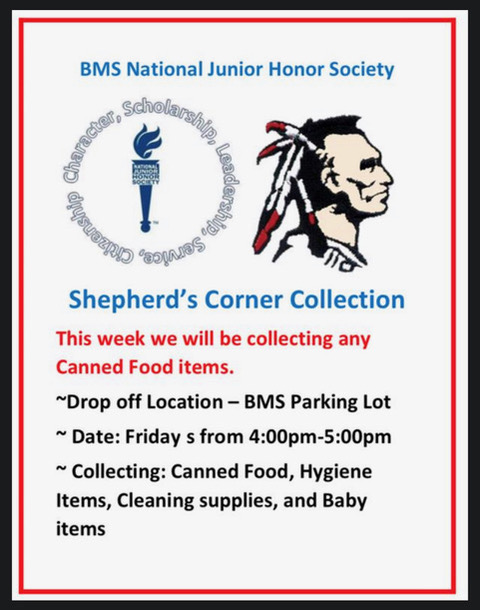 As a member of her school’s National Junior Honor Society, she had the platform, she just needed an idea — which turned into a donation drive to benefit Shepherd’s Corner.
The drive will take place from 4 p.m. to 5 p.m. on three consecutive Fridays, beginning with May 22, then May 29 and finally June 5 in the Bridgeport Middle School parking lot.
“I was talking with one of my friends and we came up with this idea,” Lang said. “We went to our adviser, Mrs. (Kimberly) Goff and she liked the idea. She has been real supportive of it.”
Shepherd’s Corner has been closed during the pandemic but plans to re-open sometime in June. Lang and the NJHS are asking for donations such as canned foods, hygiene items, cleaning supplies and baby items to help make sure Shepherd’s Corner has a full stock when it does re-open.
"Absolutely this was Gretchen's idea," said Goff who also teaches eighth grade math and Algebra I at BMS. "She took off with it and it was organized within two weeks. She's showing a lot of leadership with this."
NJHS students will be collecting via a drive-thru setup in order to continue practicing social distancing. Lang said that although the NJHS has 82 members, only two per day will be at BMS to take up the collections.
Goff said that the protocol in place is for donors to use the bus circle to drop off their goods. One of the students will then come collect the items once the drop off has been made.
This is the first year that BMS has had the National Junior Honor Society, an idea that Goff pitched to BMS principal Dave Mazza who was on board and told her to run with it.
They just had their induction ceremony last Saturday. Although there has been no in-school interaction, the NJHS has been active with virtual meetings and various outreach programs.
Goff said she couldn't be more pleased with the effort all 82 members of put into being part of the NJHS.
"They show up at the virtual meetings and say not only are we doing this but why don't we do this," Goff said. "These kids are driven and they want to make a difference. I'm honored to be their adviser."
To check out more about the Bridgeport Middle NJHS, video from last Saturday's induction ceremony is provided below: