On Friday, January 24, a caravan could be spotted heading from Bridgeport High School to Charleston early in the morning. The Journey Up Team members and advisors, along with several supporters, were donned in their business attire and ripe with anticipation as they arrived at the West Virginia Capitol Complex to present their 28-page business plan and proposal to a panel of judges in the West Virginia Department of Education. 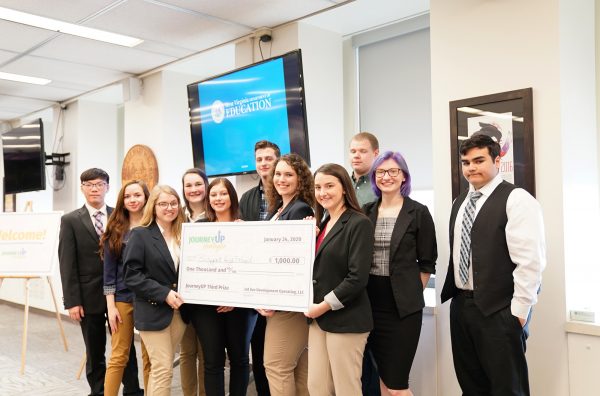 The team learned one week earlier that they had been selected as finalists in the Journey Up Competition, which was a challenge for high school students to create a design and business plan for an actual business in Huntington.  The opportunity allowed students from all over the state to transform an abandoned Coca-Cola Bottling Plant into a mecca for all things art. The owner’s vision of the space included a live music venue, a bar, a restaurant, an art gallery, maker space and a recording studio.  She envisioned the space to be an incubator for those up-and-coming in the artistic and music industry.
Bridgeport High School actually had their own 12-person team who worked tirelessly on the project for over two months, as well as a representative on the United Technical Center’s team, who also made it to the finals.
West Virginia State Superintendent of Schools, Steven Paine, greeted the teams who had traveled to compete in the final competition. Also in attendance were Harrison County Superintendent, Dr. Mark Manchin, Assistant Superintendent Donna Hage, and Career and Technical Director for Harrison County, Heidi Griffith.  West Virginia University’s Chris Morlock has worked as an advisor during the project and also made the trip to the capitol.  In addition to the dignitaries and students, the team also had a strong support system of parents who attended to cheer on the team. 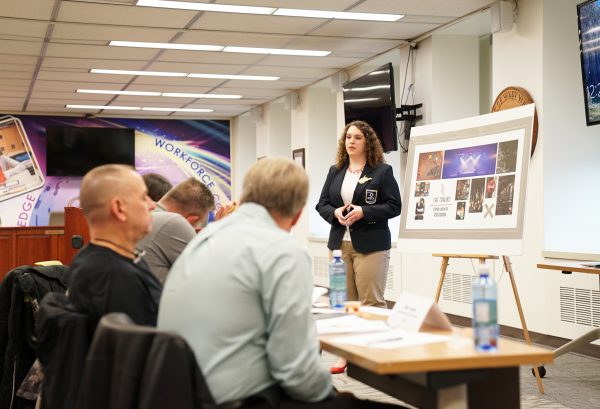 “During the break between semesters, our team met and practiced the presentation, created visual aids, and further analyzed our strategy in preparation for the trip,” said BHS Senior Alden Smith.
The BHS Journey Up Team consisted of Alden Smith, Molly Runner, Sarah McCrory, Jennie Russell, Nathan Rago, Evan Anderson, Corinne Lalama, Dakota Swiger, Chloe Stear, Lexii Jay, Anthony Li, and Cameron Harrison.  Their concept for the space included blending Huntington’s railroad history, the Coco-Cola history of the space and the music and art incubation the owner requested.  Their theme included lighting made from old Coke bottles, a dance floor imbedded with Coke lids, movable walls for the venue space, incorporating railroad ties as bar footrests, and keeping exposed brick walls for warmth.  They also worked directly with area contractors and music industry leaders to make sure the finances were realistic and that their ideas were feasible.
“It was really fun to work as a team to come up with all the elements for the business,” said McCrory. “Since it was a real-life challenge, it elevated our collective brainstorming and helped connect us with resources from different parts of the state.” 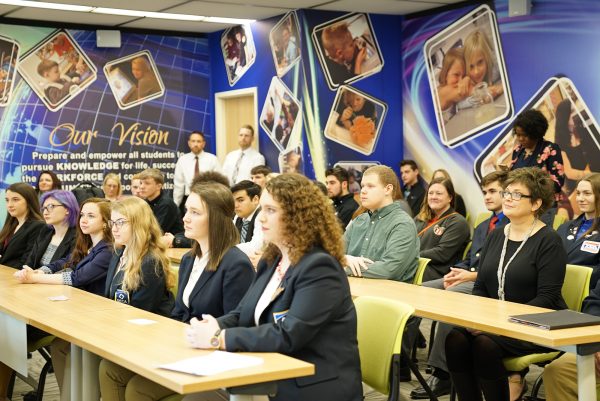 UTC’s Build a Dream Team also had a Bridgeport representative. Sam Drake, a second year Drafting student, was among the team members who pitched their ideas for the Huntington space. Ultimately, the UTC team placed second in the competition by integrating a unique logo, professional layouts, and a combination lodging and recording space for musicians.
BHS’s Journey Up team also placed among the top honors, earning third place in the competition. The owner of the space said she plans to take ideas from the top three winners to incorporate into the building as they enter the next stage of making her vision come to fruition.
“We were thrilled to be among the top teams in the state and we learned a lot in the process,” said Dakota Swiger.  “Opportunities such as this allow us to hone our networking skills and presentation skills as we prepare for our upcoming DECA state and international competitions. It also helps us get closer as a group as we do projects that can be used on resumes and scholarship applications.