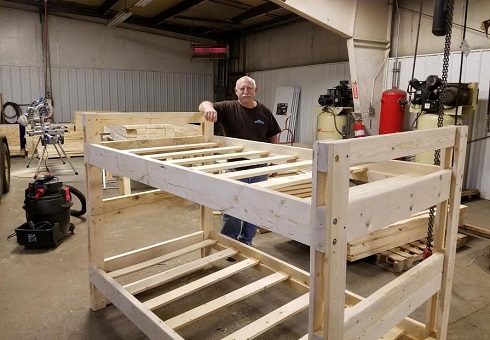 On July 9, some people were still talking about their Independence Day celebrations.  Dave Lang, however was watching a story on NBC Nightly News with Lester Holt that inspired him to explore it further. Lang, as it turns out, is not very good at retiring.  Having worked in finance for most of his life, he first sold his half of Pro Contracting, Inc. to his partner before  two additional retirement attempts.  Simply put, he is a man who is passionate about helping others and working hard to make that happen.  The journey to his latest endeavor, however, is a little more complicated.
As a self-taught woodworker, Lang has always loved building things.  The story featured on that July evening was about another builder on the other side of the country.  Luke Mickelson’s non-profit company, Sleep In Heavenly Peace, was showcased in Holt’s broadcast that evening and the work they were doing for underprivileged children awakened something in Lang’s soul that has now led him to open the first Sleep In Heavenly Peace chapter in West Virginia.
It is estimated that 2% of the population of children do not have beds.  Some sleep on couches or with siblings, but many sleep every night on the floor.  For Harrison County, that means that 1400 children go to bed each night without a bed. That number did not set well with Lang, so he started the process of becoming an official chapter in the Mountain State, allowing him to use his love of woodworking to build beds for local youths.
“Originally, I planned to start in Harrison County and grow to surrounding counties,” said Lang.  “There are 20 zip codes in Harrison County alone and the bed requests are done by zip code.  Assuming I meet my goal of building and providing at least 100 beds this year, it will still be a long time before I can reach the surrounding counties.  For now, I am focusing on serving Harrison County families and committing my time and resources to making sure kids in this area have a bed to sleep in each night.”
The non-profit company, which started in Idaho in 2012, has grown from nine chapters in 2017 to 118 chapters in 2018. More than 12,000 volunteer hours have been logged across the country, processing over 10,000 requests and fulfilling over 3500 orders.  Bed requests are submitted digitally on shpbeds.org and categorized by zip code. Local chapters, such as Lang’s, then process the requests and prioritize the needs. From there, he and his group of local volunteers build the beds to the specifications held by Sleep In Heavenly Peace.
Lang traveled to Idaho in September to get oriented with the company and has spent the subsequent months navigating the technological, logistical, and organizational needs in order to start building.  Bridgeport’s Mayor, Andy Lang (no relation), committed to donating the wood for the first 25 beds and other local businesses have established partnerships with Lang to help provide space, mattresses, bed linens, blankets and pillows.  Right now, he has a team of about 15 volunteers who have already started the building process and all donations will stay local.
With an estimated $40,000 in operating expenses, Lang continues to coordinate fundraising efforts for the chapter.  One hundred percent of the work is volunteer and each child will receive a bed, mattress, sheets, pillow and blanket.  The beds will be delivered to the children in need and requests will be kept confidential.
A lack of quality sleep has been linked to shortened attention span, poor grades, irritability, and mental health issues. It can also contribute to obesity, diabetes and high blood pressure.  Sleep In Heavenly Peace is currently the only charity that provides hand-crafted beds for children who do not have beds.   They has been featured on Mike Rowe’s ‘Returning the Favor’ and most recently, have been named among the top 10 CNN Heroes 2018. Supporters can vote for the charity on CNN’s website and the organization with the most votes will receive $100,000.  Voting is open through December 4.
“A year ago, I had no idea that I would be involved with such a meaningful organization,” said Lang. “I am grateful for the opportunity to help these kids and grateful for such a supportive community that doesn’t hesitate to help those in need.”
Inquiries and donations can be made by contacting Lang at dave.lang@shpbeds.orgor by visiting their Facebook page @shpharrisonco.