From BHS to Europe to A Life Among the Mountains, Alumnus Chelsea Morphis Creates Unique Jewelry Reflecting Her Experiences 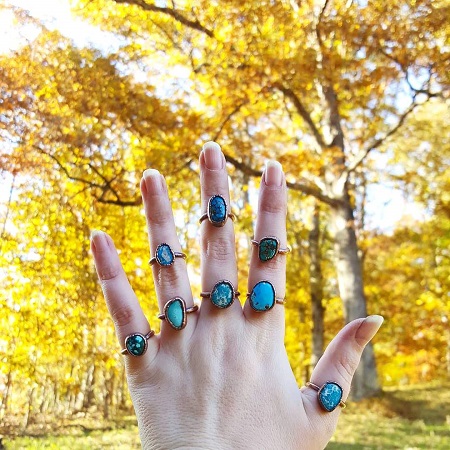 Thirteen years ago, after graduating from Bridgeport High School, Chelsea Morphis took off to see the world.  While attending West Virginia University, she spent a transformative year studying in Sweden and traveling to surrounding countries. The experience left her empowered, independent and ready to learn more about other cultures.  Upon her return, she changed her major to Anthropology and Sociology, graduated with honors and embarked on a career in behavioral health.
After moving to Elkins, Morphis started designing jewelry and beading as a hobby.  Nearly a decade later, her skills have evolved to include a process called electroforming, which is reflected in her current pieces. Putting her chemistry and science classes to good use, she taught herself how to create one-of-a-kind jewelry that incorporated organic items with traditional elements.
After opening her business, Gypsum Hollow, in 2017, Morphis was thrilled when her first collection sold out in just 48 hours.  She now focuses on creating unique items from crystals, twigs, accords, leaves and more, using the electroforming process to make form a copper or metal finish.  Each week, Morphis’ work is sold at the Bridgeport Farmer’s Market, which will be holding its last indoor market on April 14 at the Bridgeport Conference Center.
Pulling from her travel experiences, cultural research and natural surroundings, Morphis has found a way to make a living doing what she loves.  Her creativity continues to grow as she explores new techniques to showcase at the local market.  More information can be found at www.gypsumhollow.com.