Another year, another solid turnout for Bridgeport’s annual Citywide Yard Sale.
According to Bridgeport Community Development Director Andrea Kerr, the numbers of homes who registered in time to be included on the city’s printed yard sale list for the Saturday, August 6 event, is right around 90. Although a little lower than last year, it is in the range of previous years.
“That’s a pretty decent turnout even though the last few years we’ve averaged around 115 homes. If you put all the years together, we’re in 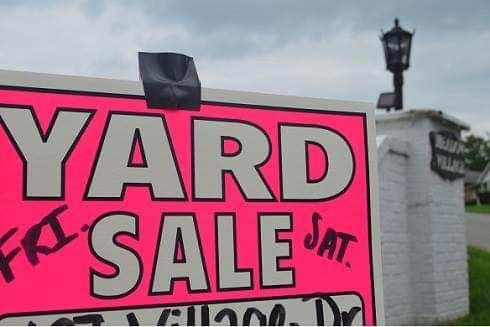 the range between 85 and 100 so it’s right where we expected,” said Kerr.
The “official” time for the city sale is from 8 a.m. to 4 p.m. As Kerr has noted previously, many residents start earlier and remain open longer than that time frame. She also said many residents opt to make it a two-day event, which is something the city has no control over.
“They can be open on Saturday, or the day before, as long they want,” said Kerr last month. “Our experience shows the times generally fluctuate by household, but several will be open for at least the city observed time frame.”
While there will be 90-plus homes on the printed lists that will be available later today at the Bridgeport Municipal Complex, the Benedum Civic Center, the Bridgeport Public Library, and the Citynet Center, there will also be a list on the city’s Web site. Kerr said those that registered late can be added, but they won’t be included on the printout list at city facilities.
“We’ll add them to the online list, but it’s too late for the printed one,” she said.
Click HERE to see the list of addresses. .
The printed lists won’t just have the addresses but a city map as well. There will also be addresses and names of local city restaurants for those making a day of it. Click HERE to see the list of restaurants.
Kerr said the inquiries and interest in the event remain high. In fact, she said the inquiries  this year started as soon as the new year began. She said other municipalities check in to see their date and even communities and churches check in who do large congregation sales.
“Many people plan an entire weekend around this,” said Kerr.
Due to the popularity of the event, it does have one negative. The city sees a massive influx of traffic on the day of the yard sale.
Kerr said she has met with Police Chief Mark Rogers who has assured here there will be extra police patrolling the neighborhoods the day of the yard sale. She said the VIPS will also be out, as well as digital signs reminding locals and visitors not to block streets as traffic increases substantially during the event.