Striking Up the Band Difficult for Hayslette, BHS Students During COVID-19 Pandemic

Some activities can undergo a minor tweak and still be able to take place even with COVID-19 pandemic restrictions in place.
For some though, it’s a little more difficult.
“This entire pandemic has undone what we are supposed to be about,” Bridgeport High School Band Director Chris Hayslette said.  “Band is supposed to be a group of people who do things together. We’ve had to be a group of people who aren’t allowed to be together.” 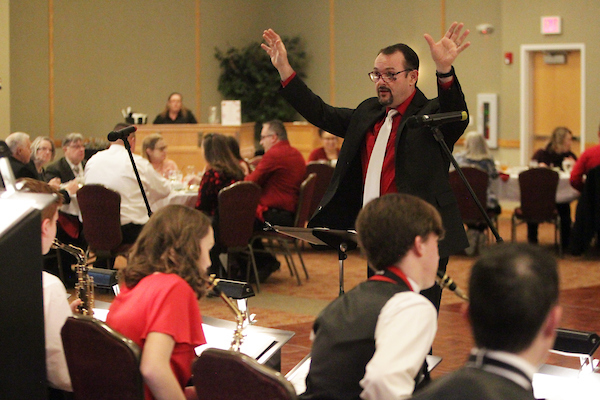 Without the simple act of “banding together” and the near total disappearance of the thrill that comes with a live performance, it’s been a rough 10 months for anybody involved with a band especially at the high school level.
Spring of 2020 functions were wiped out, no summer band camp, no parades and for a while it looked like high school bands were not going to be allowed to perform at football games.
“It’s been challenging,” Hayslette said. “We had hopes when we started that we would at least have a marching band season. We ended up doing the home football games and that’s all we were really permitted to do by the SSAC.
“It was really strange, we were still able to have practices but we divided the kids in half so we wouldn’t have them all here at the same time. We didn’t do a full field show like we would normally do, we didn’t have a band camp like we would normally do. 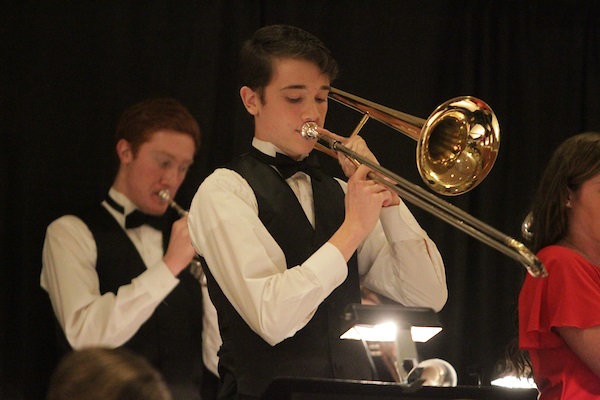 “We kind of survived that and we were trying to get a little bit done when we were having the kids in two days a week but, it was freshman and sophomores this day and juniors and seniors on the other day so you didn’t even have a good instrumentation to deal with. The freshman and sophomore class could be like three flutes and two trumpets and a snare drummer in this class and then the next class has 10 saxophones."
It’s now been a while since Hayslette has had any kids in class and it’s anybody’s guess when that may change. West Virginia Governor Jim Justice recently announced a target date of Jan. 19 for the resumption of in-person learning for elementary and middle schools. High schools would still follow the color warning maps but could chose to have in-person instruction as long as they weren’t red on the map.
Harrison County has been red for days now and doesn’t appear to be dropping down to orange any time soon. Also, the county’s Board of Education – like several other counties in the state – announced remote learning will be in place for all schools as long as the county was orange or red. The two-day blended model would be used if Harrison County was gold or yellow. Green will be the only color where five-day in-person learning would resume.
“It wasn’t even a full band when we had the kids here and it’s been several weeks now that we’ve had the kids in at all so we are basically back to doing what we were doing last spring,” Hayslette said. “In some ways that was a little more manageable because it happened in March and the kids had a lot of in-person training under their belt when we went there. They had music already at home and they had instruments already at home. 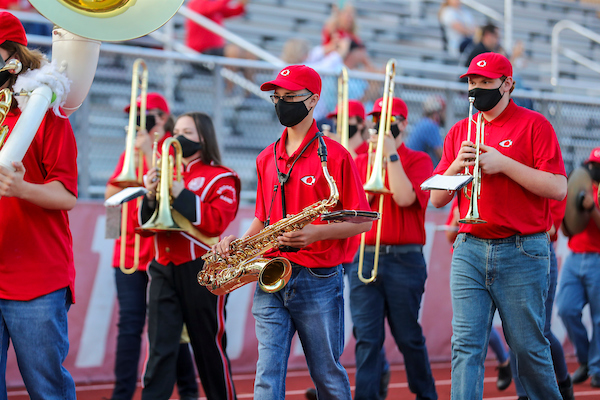 “Our main goal, has been what can we have these kids do at home by themselves to keep them motivated and keep them playing. Our goal every week is to try to put things out there. We do meet with them online but we can’t really play together online because we don’t have that kind of technology. Everybody’s internet is different, there is the delay and lag to deal with. It’s virtually impossible to do that.”
Hayslette said there has been one online application that has been useful and they are making the most out of it.
“There is a program that is called SmartMusic that has basically the full arrangement of pieces and there are a lot of pre-published one in that system, or you can add your own manually.
“So we have a lot of our music classes working on that, where they can practice their part and it has the accompaniment built in so they can hear the other parts and it also does assessment of their performance. We are doing at least one of those a week, where they are at least working on some pieces. We will talk about those when we meet with them online in our conferences and we will go through parts and answer questions and count rhythms. But the practice and actual recording of it they do on their own.”
While there are still plans as of now to resume high school sports on March 1, the immediate future for high school band is bleak. The regional band tournament, which BHS was scheduled to host the Region 10 meet on April 1-2, was canceled in the fall. The state jazz festival in Morgantown, also canceled. Hayslette said the jazz band’s annual Valentine’s Day fundraiser at the Bridgeport Conference Center, also won’t be taking place.
He added that anything already scheduled for the remainder of the school year has already been canceled or hasn’t even been discussed yet. Even if a spring event could technically take place it will take some time once kids are back in school and the whole band can practice together before they are even prepared enough for a performance.
“We already know when we go back to normal, hopefully next fall, that we are going to basically have two freshmen classes to deal with it,” Hayslette said. “At least as far as the marching goes for sure, the freshman this year got a little taste of what it would be but it’s going to be an eye opener when we go back to normal because they really haven’t seen normal yet. 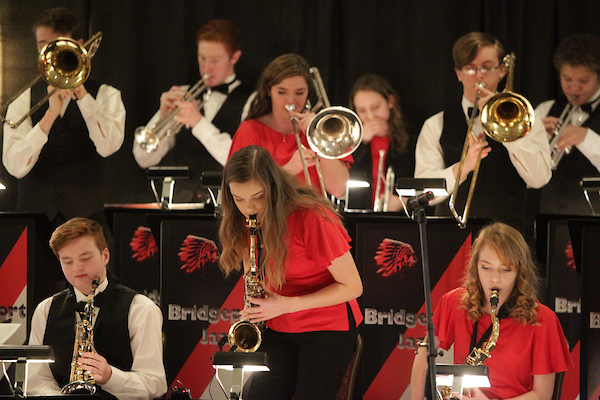 “We had to divide the kids up even when we had our minicamp which was basically two to three hours of rehearsal. We would have them outdoors and have them separated by sections. Even when the kids did see each other all together at a football game, we still had to keep them six feet apart.
“The whole social interaction aspect that band is all about to some extent we couldn’t have that. “First we weren’t going to be allowed to go the games. Then it was only the drum lines then it was you have to be separated by six feet and everybody has to have their mask on.
“We ended up having the drum line in the bleachers where we would normally have the full band. And we had chairs that we spread out from there around the corner of the track to put the rest of the kids in. That was different to say the least.”
The level of success with online instruction is going to vary from student to student. Band is no different, Hayslette said as some students are a little more diligent than others. But the mindset has remained positive with the band as he says they make an effort to joke and interact during the online meetings. 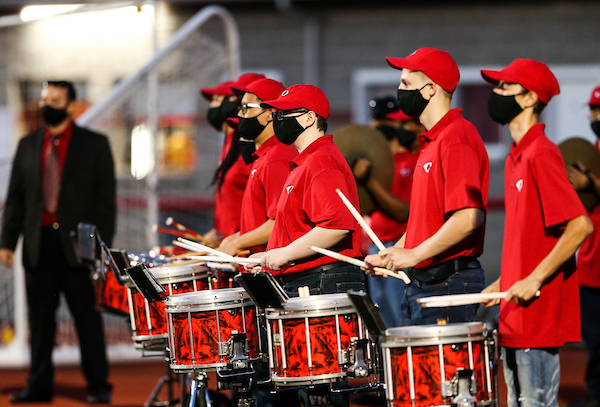 It’s probably toughest on the 13 seniors in the band, who at least did get a Senior Night ceremony during the first football game and were able to be part of the limited Homecoming festivities.
“It was hard on last year’s seniors missing out on what they did in the spring but it may be worse for this senior class,” Hayslette said. “They haven’t even gotten a couple of months of normal.
“What we are doing right now is not band. We’re just trying to keep the kids engaged until we can do band again.”
Editor's Note: Top two and fourth photos from jazz band performances prior to the the pandemic. Third and fifth photos are from the season-opening football game. All photos courtesy of www.benqueenphotography.com