OK, now that I have your attention…or, wait, are you still looking at the two intelligent, attractive women in today’s cover photo? For the record 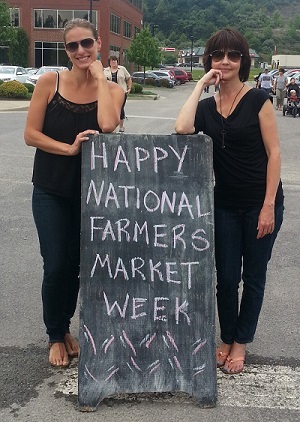 that is BFM board member Athena Freedlander on the left and BFM founder and Fearless Leader Deb Workman on the right. Yeah, Deb also happens to be my better half.  What, you didn’t think I got this job because of my boyish good looks and/or mad writing skills, did you?
Last year we decided to fight the misguided perception that the prices at Farmers Markets were twice as high (or more) as those found at your local supermarket. That mission is what led me to do an informal price survey comparing BFM prices with those found at the local branches of two large supermarket chains. This year I expanded the list of products covered to include onions, hot peppers, apples, and eggs. I also added chuck roast, four types of ground beef, and pork chops to the protein offering.
Like last year the BFM price listed is an average of all the vendors who were selling that particular product at this past Sunday’s Market. In most cases with the produce that was at least three vendors. In the case of the meat products the Market now has four vendors selling grass-fed beef and two that sell pork. We had five vendors offering eggs last week. Two exceptions are corn and apples. We only had one vendor selling each of those items last week.
Unlike last year if one of the supermarkets had an item on sale I used and noted the sale price below. Another difference this year is the fact that one of the supermarkets has greatly expanded its organic produce offerings. I used those prices when available and noted where a non-organic price was used. Finally, where I felt it was appropriate (tomatoes and bell peppers) I listed both the organic and non-organic prices. 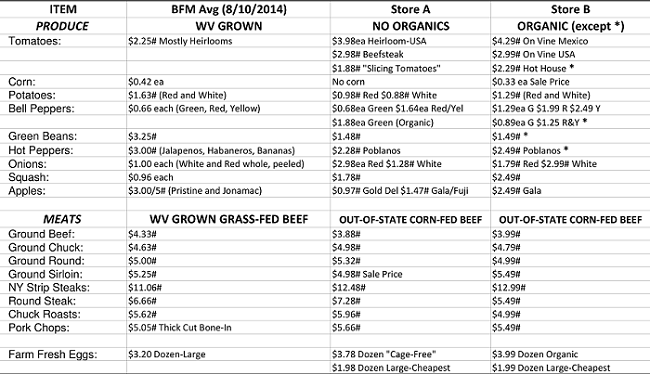 As you can plainly see the BFM once again more than holds its own in the price wars. The big surprise to me is the fact that the BFM prices have either stayed the same or are actually lower than last year while the supermarket prices are, almost across the board, higher. Only one BFM produce item, green beans, is higher than last year. Likewise, only one meat item, ground beef, is higher.
And while we’re on the subject of ground beef I would like to point out that the lowest price ground beef found at the BFM is mostly of the 80/20 fat content variety while that found at the supermarkets is 73/27. This may explain the higher price on this one item. Of course, you can see that the Market is lower priced on all other varieties of ground meat (except for the one sale price at Store A) as well as most of the other cuts of beef and pork. The amazing part of the lower meat prices is that the BFM farmers are doing this without the benefit of yield-increasing hormones, steroids, and antibiotics. No sir, nothing but the best WV grass for these cows.
Two of the new items deserve a little explanation as well. First, WV is famous for its apples and many of the most popular varieties are still a month or so from being ready for market. The two early varieties listed in the chart are extremely well priced compared to those found in the supermarkets, none of which were from the Mountain State. And even though they won’t be as pretty as the artificially waxed apples you will see at the grocery stores they are just as tasty, crisp, and juicy, if not more so.
Secondly, it is extremely difficult to fairly compare the eggs found at a Farmers Market to those found at the supermarket. In the name of fairness I decided to list both the highest and lowest prices of the supermarkets’ large, grade A eggs and, as you can see, the Market’s eggs fall slightly above the average of these prices.
That being said, if you’ve never eaten a farm-fresh egg then it is nearly impossible for me to convey to you the difference in taste and color. While, again, the supermarket eggs will all be a perfectly uniform white or brown, you may find white, brown, green, or even blue eggs in your carton from the Market. In this case the difference is all about the beautiful golden yolks found on the inside where it really matters. And don’t let the egg safety experts scare you off from giving farm-fresh eggs a chance. These are the only eggs I’ve eaten for the past six years and I’m still standing!
In closing, I would only remind you that prices, whether high or low, are no measure of quality, either good or bad. I make the next statement while freely admitting my obvious bias towards the WV-produced products found at the BFM. I honestly believe there is no question that a food item produced close to home, lovingly cared for by a local farmer, never having come in contact with a chemical or pesticide, and harvested the day before or the morning of the Market is far superior to one sprayed with who knows what, harvested days or even weeks ago, and trucked from out of state or, in many cases, from Mexico, Canada, or Chile.
Don’t forget next week’s Country Roads Cook-Off at the Market! Check back here next Sunday morning for a preview of the contestants!
Until next week, Stay Fresh!
The Bridgeport Farmers Market Association is the seven member all volunteer board of directors that governs the Bridgeport Farmers Market. It is supported by a wonderful group of community volunteers who help in the setup and maintenance of the market. For more information on the Farmers Market or to see how you can help please e-mail us at bridgeportfarmersmarket@yahoo.comor, better yet, LIKE us on Facebook or follow us on Twitter. You can also check out the Market’s own YouTube channel: http://www.youtube.com/user/BridgeportFarmersMktor for more BFM video content you can now go to http://vimeo.com/bridgeportfarmersmarket/videos