Let's Get Fresh: A Word from Chef MK Ohlinger

By Connect-Bridgeport Staff on September 30, 2018 from Let’s Get Fresh

This week, I bring to you a piece written this summer by Chef MK Ohlinger of Hill and Hollow. MK is a long time supporter of the market and a passionate local foods advocate. Read on as he reminisces on county fairs of years past. 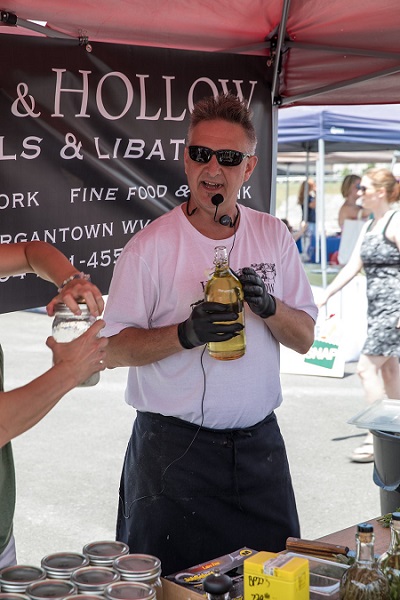 Last week, I stepped back in time. Not in the physical sense, although some of the fashion I saw was rooted solidly in the eighties, but in a spiritual sense; I went to the Mason County Fair. Now, when I was a kid, this was the biggest event of the year, the social event of the season. For us farm kids, it was the culmination of months of hard work, a chance to show off your skills as an aspiring agronomist, to make your family proud, to be judged as an equal among your peers, a chance to put on your good boots and cowboy hat and meet girls from other schools that might think owning a show steer is cool. For ten years, I lived in the horse barn that week, on a cot in the hayloft just over stall number 13, which was mine through four different horses. The sense of privilege that come Walking the dark empty grounds at night, knowing just after the roosters crow it would fill with throngs of people; the shuffling sound of all the animals settling in for the night; slipping over to the midway to cage a beer off the carnies sitting around their fire. You could always count on carnies to give a fourteen-year-old kid a beer. Although it’s no longer the centerpiece of country life that it once was, it’s hard to overestimate the importance of the county fair in rural culture. Take the musical talent I saw there as an example. In the 70's I saw Loretta Lynn, Charlie Pride, Conway Twitty, Tammy Wynette, Porter Waggoner and Dolly Parton, Red Simpson, a very drunk Ferlin Husky, and the Charlie Daniels Band, who were too rock n roll back then for such a country crowd. Once, when Tom T. Hall was about to take the main stage, a sudden downpour canceled the show, so he walked over to the Home Canning barn with his acoustic guitar and played for about thirty of us; no band, no P.A..system, just for the love of the music. I can see that in my mind’s eye to this day; it’s not about the money or the fame, it’s about the music and the people who hear it.
Consider, these were superstars at the height of their fame. I don't know much about contemporary country singers, because, to be blunt, they all suck, but you better believe that guy on the Ford truck commercials ain't playin' for the county fair crowd this year. So, after many years away, I took my family to the fair and things held up pretty well. Most of the big dairy farms are gone, including all of my aunts and uncle’s farms, all that good Ohio River bottomland wasted on power plants and chemical factories, but small farms are still producing lots of beef cattle, and meat steers were well represented. Goats and sheep have increased greatly. Meat goats have really come to the forefront of the small livestock shows, a solid indicator of our increasingly diverse population. Market hogs are as popular as ever, and I spent a lot of time admiring those long loins and perfect hams on the hoof.
As a teenager, I never took the time to appreciate such fine animals; I was more interested in the hams on the farm girls showing their market hogs. The biggest decrease seemed to be in the Small Livestock Barn. There were no more than fifty or so birds in the poultry section, all chickens save for a pair of ducks, and only about twenty rabbits, a bellwether for our declining farm family population. Thirty years ago, there were literally hundreds of rabbits on display, and more breeds of chickens, ducks, geese, and domesticated gamebirds than you could count. Small livestock has always been the province of the younger members of the family. It’s where they learn responsibility, husbandry, and the facts of life, of birth, sex, and death. A kid who successfully manages forty or fifty rabbits will be ready, when he or she reaches their teenage years, to start managing the heavy stock. Farm kids are expected to work like adults from the day they can hold a pitchfork, but a herd of your own, however small, separates the wheat from the chaff, so to speak. The sibling who has the aptitude to improve his herd, the brains to turn a profit, and the guts to do his own butchering, that’s the kid who will run the farm when it’s time for the next generation to take over.
The carnies were still the same; bored, stoned, and badly tattooed, blasting Thin Lizzy and Bad Company from cheap speakers. It’s good to see that some things never change, although one green-haired kid running the win-a-live-goldfish game did compliment me on wearing a NOFX t-shirt at my age. Maybe he's too stoned to realize, NOFX are my age, not his. Old punks never die, dude, we just get really dizzy and kind of sick on the Tilt-A-Whirl. The food was all still gloriously hideous, even if anything-you-can-imagine-deepfried-on-a-stick has kind of taken over, and nobody hand-dips corndogs anymore. And thank God there's still someplace left in America where you can get deep-fried chicken gizzards, although there's certainly an irony in the fact that almost all the food at a small farm exposition celebrating local agriculture came pre-made frozen from Sams Club or off a Sysco truck.
Perhaps the biggest change, and the most worrisome as a chef, was the Home Canning section. This used to be half a barn; every farm girl dreamed of taking home a blue ribbon for her rhubarb jam or her string beans or her pork neckbones, every grandma hoped to add 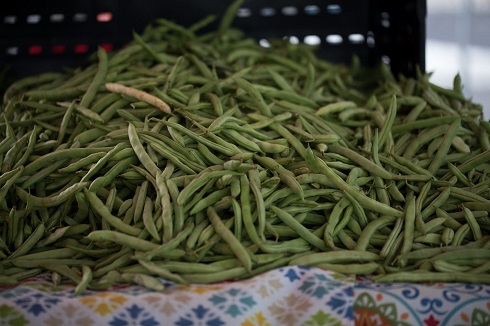 another Best In Show plaque to her kitchen wall. Those beautiful displays of Ball jars stretched through aisle after aisle. Now, the entire display stretched for six sad feet. As a chef, this loss of skill, craft, and pride breaks my heart. As an American, this loss of independence and self-reliance is troubling. Not long ago, we were a predominately sub-rural country. Many more of us grew up on fairly self-sufficient small farms, and almost everyone had relatives or at least knew folks who were farmers. We had a solid understanding of where our food came from; what it was, how it was produced, and that often, a living creature died so that we could eat. But in the last forty years, America, and even behind-the-times West Virginia, has become a predominately suburban nation. And the suburbs produce nothing. They exist only to consume, and the loss of home food production, and the knowledge that goes along with it, is obvious. I confess, and I'm ashamed: I don't know how to can. Both my grandmothers canned, but my Mom worked an outside job while my grandmothers were stay-at-home housewives, which doesn't mean they didn't work hard, but it’s different and we all know it. That skill just faded away. This was the norm for farm families of my parent’s generation. My Father stayed home and worked the farm while my Mother worked for the School Board for the steady reliable paycheck and the health insurance, and it’s still the norm for nearly all small farm families today. But I've been inspired by my visit to my childhood. When we got back to my folks place after the fair, I went up in the haymow and dug out my Grandmother's old canning pot. It still smells like green beans.