In the past four years, Bridgeport’s Jacob “Jack” Funk could be found on the other side of the world in China or hundreds of times 9,000 feet or higher above the world flying around.
It’s not that Funk graduated and came into some cash or is living the high life. Instead, it’s just part of the nearly four years he’s put in at the United States Air Force Academy in Colorado Springs, Colorado. And now, that time is about to come to an end with a unique new 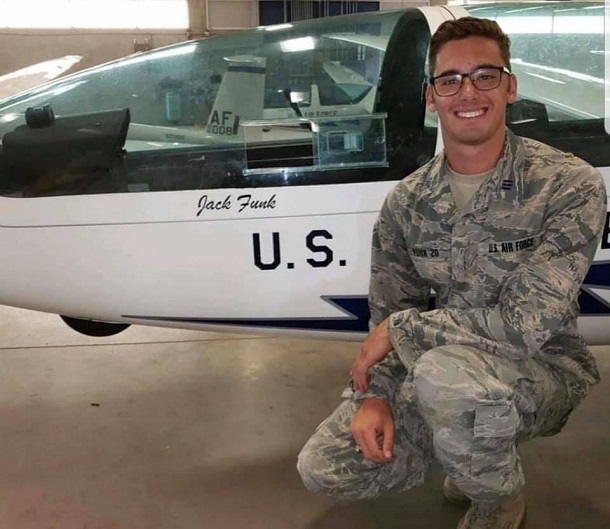 chapter about to start that could have him way above the earth once again.
“I’ve been accepted into pilot training school,” said Funk. “The goal is to be a fighter pilot and, in particular, be involved with any jets involved with close air support.”
Not bad for a young man who four short years ago was a standout student-athlete for the high school situated along Johnson Avenue. Yet not too surprising, considering his prowess in the classroom and his leadership skills that earned him the recognition of Mr. BHS.
Four years later, Funk is soon to be getting a degree once again. This time, he’ll be graduating in May from the USAFA with a degree that features a major in aeronautical engineering and a minor in Chinese.
“This has been a unique and rewarding experience,” said Funk. “It’s similar to most college experiences in many ways like staying in dorm rooms for all four years, but it’s different in a lot of ways too.”
Funk still remembers his first year at the Air Force Academy. He said it was “pretty rough” and involved a lot of military training and 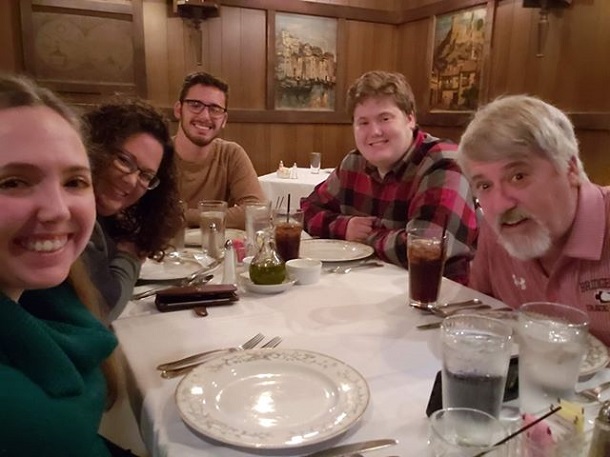 knowing that he was “low man on the totem pole” in his first year.
Things changed, as it did for all students, in his sophomore year. He began coaching cadets and teaching them how to cope and he began to see the fun side of the Academy during a period called “Sophomore Summer.” It was during this time where he soared in a glider for the first time.
“You have some options of what to choose and I chose the glider,” said Funk, who eventually would become an instructor pilot for the glider. The decision, however, meant free time was at a premium with hours spent every other day at the airfield learning the complexities of the glider and managing time for classes and study.
By the time Funk’s junior year started, the responsibilities on the military and academic front stepped up. No longer were core classes loaded onto the schedule, but classes specific to the major and the minors chosen were heavily integrated.
During that year, he became a first sergeant for the 94th Squadron. He represented 200 cadets in the squadron and had the responsibility to make sure everyone involved felt represented. Of course, there were other duties – some fun – that included planning tailgate parties 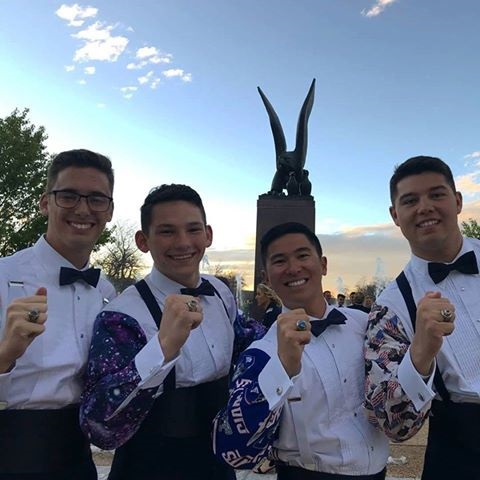 for Falcon football games.
This year, his senior year, is pretty much education and military based. The good news is that with a front-loaded senior year schedule – by at least his standards – things are a little easier heading to his May graduation.
“It’s a little light, which I don’t mind,” said Funk.  “All four years I’ve had a pretty heavy academic load. I’ll have 167 credit hours when I graduate, which is not typical for most cadets.”
Most cadets, or students at other universities, don’t have a program of classes known as Capstone, which Funk is involved with. Those classes, where cadets use engineering knowledge in a Capstone course, involve building and testing solutions to meet the needs of various Air Force and private customers.
“This last semester we did research for the Navy and Air Force research labs,” said Funk. “It’s unique because the aeronautical department is contracted by other groups, such as 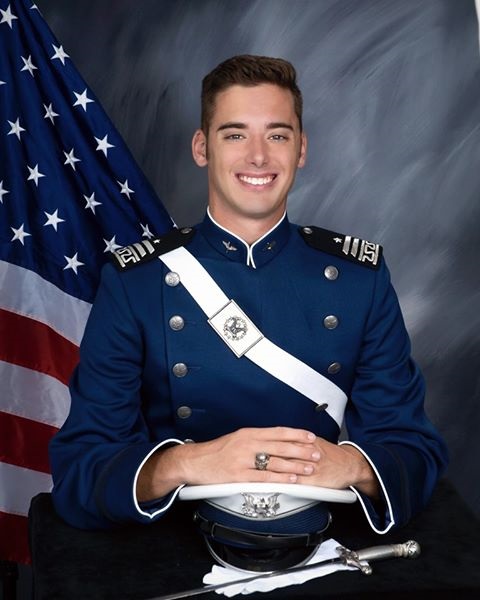 NASA, to do research on different projects.”
Funk’s personal project were the glider flights. Along with flights on his own, as a junior and senior he’s taken up younger cadets for flights after qualifying to instruct after nearly 90 flights. He’s currently a “soaring instructor” at the Academy.
While the gliders aren’t multi-million-dollar aircraft, they aren’t cheap either. In fact, cadets must be qualified to fly them because of their cost.
“You are entrusted with a $275,000 glider and you have other cadets you are instructing so you have someone’s life in your hands as well,” said Funk.
Funk said the gliders are usually taken between 9,000 and 12,500 feet with 14,000 feet the maximum. At that height, oxygen is required
Getting off the ground also requires something special. A Piper Super Cub – a prop plane – has a 200-foot long rope attached to it as a tow plane and you are pulled, taken up and then released at the proper altitude as the rope falls off.
It’s now old hat for Funk who, as a senior, is the assistant program manager with the gliders. That involves him overseeing an entire class of nearly 80 students and instructors. All told, he’s done 310 glider flights and 250 more flights on the instructional side of things for the 94th Flying Training Squadron.
It sounds like a lot, and it is. The reason Funk says he’s been able to handle it all goes back to his days at Bridgeport High School.
“One of the biggest things I learned there was time management.  There were a lot of students here that had issues with study habits their freshman year because in high school it was easy for them,” said Funk. “I had to learn study habits at Bridgeport, primarily because of the 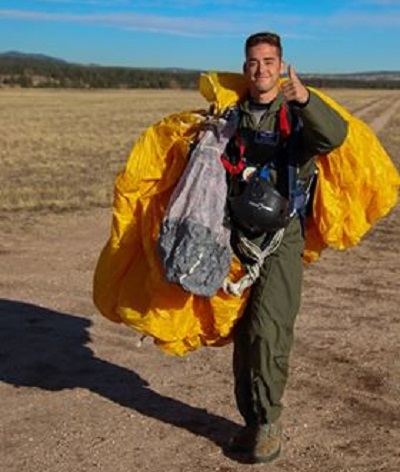 AP classes that proved extremely helpful on so many fronts.”
That time management will prove beneficial in the years ahead. His time in the glider enhanced his love of wanting to fly and applying for pilot training school and eventually getting accepted. What that means is Funk has a long-term commitment to the Air Force.
“The base commitment for service for the Academy is five years,” said Funk. “When you get into pilot training, you have a 10-year commitment. I can leave after that 10 years, but I plan on staying for the full 20.”
The reason for the certainty is Funk loves the Air Force Academy. Most important, he loves the people he’s around.
“The Academy has been so much fun, mainly because I’ve met a ton of remarkable people,” he said. “It’s one of the few institutions where you meet people from all over the world. We have cadets from all over the world.
“On top of that, you meet people from every walk of life. There is a cadet here that grew up living in a car and decided to work hard enough to get here and one that comes from a wealthy oil family,” he continued “Once here, though, you’re all the same and everyone respects one another because it’s not easy to get here.”
Funk, just like high school, has managed to make it look a bit easy. It’s probable he’ll make the next 10 years look easy as well.
Editor's Note: Top photo shows Jack Funk with his personal glider at the Air Force Academy.  In the second picture, the Funk family - clockwise from left - Danielle (sister), Amy (mom), Jack, Andrew (twin brother), and Fred (dad) at the dinner time at Christmas this past year. In the third photo, Funk is shown with Felix Krup, Brad Ang and Cole Delgado with their USAFA rings. The fourht photo shows Funk in his official USAFA photo, while he's shown below after jumping from plane. Below is the video of Jack Funk putting his name on his glider. All photos and video courtesy of the Funk family.