FROM WEST VIRGINIA WESLEYAN COLLEGE
Three West Virginia Wesleyan College students have been named Benjamin A. Gilman International Scholarship recipients for the 2019 summer.  The Gilman Scholarship is a program of the U.S. Department of State’s Bureau of Educational and Cultural Affairs (ECA) and is supported in its implementation by the Institute of International Education (IIE).  The three recipients increases Wesleyan’s Gilman Scholarship total to seven over the past ten years.  Wesleyan can also boast of 14 Fulbright Scholarship winners and one U.S. Critical Languages Scholar during that same time span. 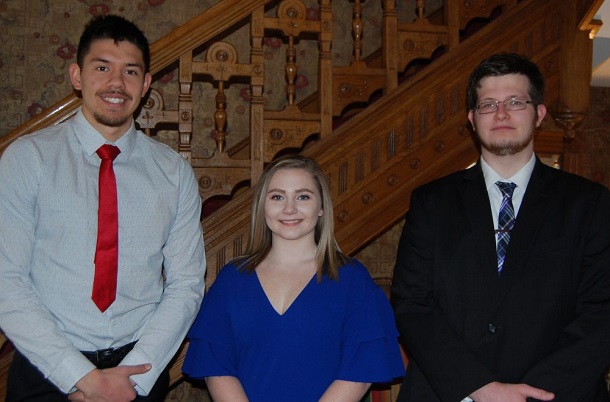 The 2019 summer recipients are Caitlin Cottrell, a political science and international studies double major from Elizabeth, WV, Marcus Larrson, a political science and history double major from Solna, Sweden, and Alexander Bradley-Popovich, an applied physics and political science double major and mathematics minor from Clarksburg who is a Bridgeport High School graduate.
Cottrell, who holds a 3.95 cumulative GPA, is an active participant in the College’s Center for Community Engagement.  As a Wesleyan Service Scholar, she completed 94 hours of community service in the fall of 2017 and 75 hours last spring.  Her primary service site was the Literacy Volunteers of Upshur County.  She also served as a Team Leader for the WE LEAD Poverty Reduction team.  Last summer, she was hired as an AmeriCorp volunteer for the West Virginia Energy Express program.  Cottrell is a member of Alpha Delta Pi social sorority, Alpha Lambda Delta honorary, and Kappa Mu social science honorary, and treasurer of Panhellenic Executive Council.  She plans to travel to Jordan through the Gilman program.
Larrson is a member of the Wesleyan men’s basketball team and transferred to Wesleyan from Virginia Military Institute.  He has been actively involved in service projects at Chapel Hill United Methodist Church and the Literacy Volunteers of Upshur County.  He is a member of Phi Sigma Alpha political science honorary and Black Student Union.  He plans to participate in the Peace and Conflict Studies program in Lake Victoria Basin in Rwanda and Uganda through the Gilman program.  Larrson is a native of California and moved to Sweden with his family.
Bradley-Popovich holds a 3.95 cumulative GPA and has service as an active volunteer at ARC at Harrison County and with the West Virginia Shriners to raise awareness for children’s healthcare services.  He is also involved with West Virginia DeMolay and West Virginia Wolf Political Action Committee, a non-partisan organization promoting campaign finance reform. Bradley-Popovich was elected State Master Councilor of West Virginia DeMolay in 2017-2018 and Chevalier of DeMolay, the highest honor available for active members. He is also a member of Alpha Lambda Delta and Sigma Pi Sigma Physics honor society.  Bradley-Popovich was awarded a NASA Undergraduate Affiliate Fellowship in 2016.  He plans to study in the Czech Republic through the Gilman program.
The Benjamin A. Gilman Scholarship International Scholarship is a grant program that enables students of limited financial means to study or intern abroad, thereby gaining skills critical to our national security and economic prosperity.  IIE has administered the program since its inception in 2001.  The congressionally funded program is named after the late congressman, Benjamin A. Gilman from New York, who served as a member of the House of Representatives for 30 years, chairing the House Foreign Relations Committee.
To be eligible for a Gilman Scholarship, an applicant must be a:
Editor's Note: Alexander Bradley-Popovich is show to the right in the above photo of the three scholarship recipients.