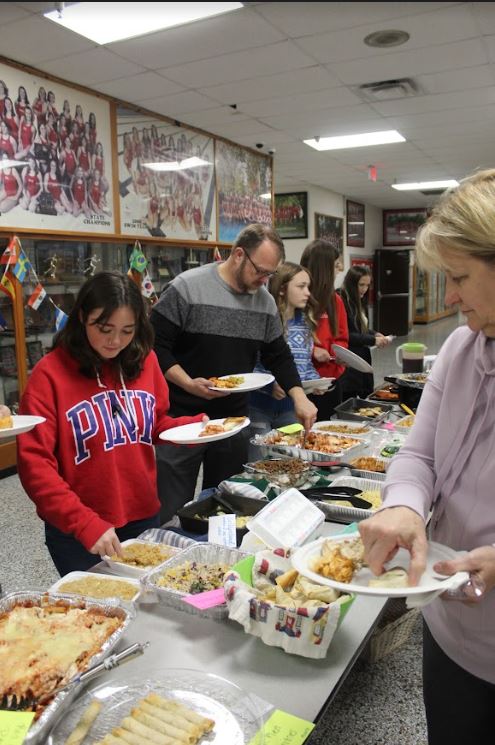 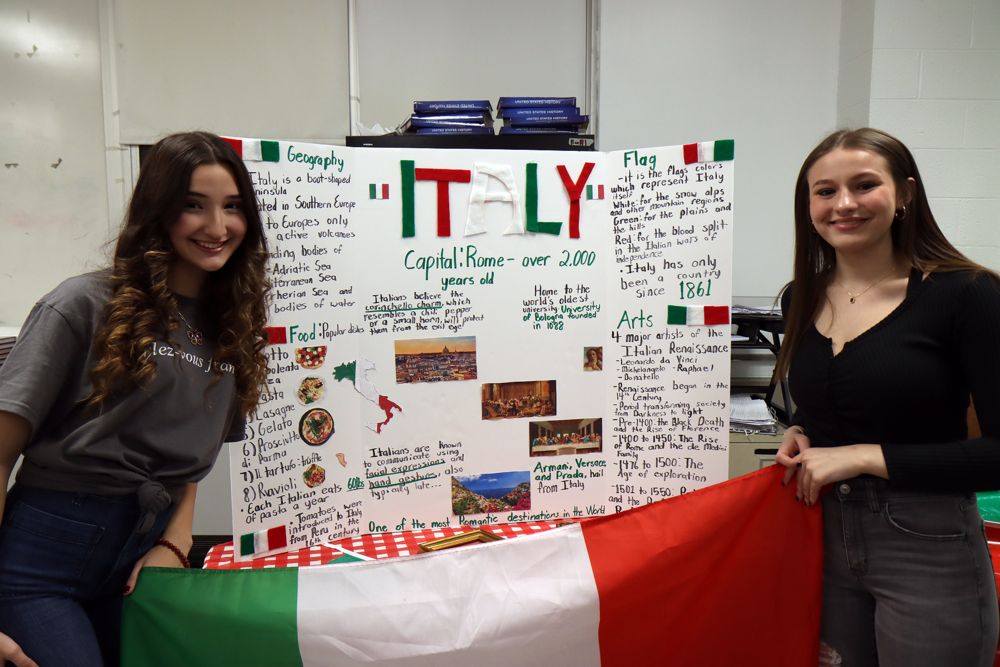 Where would one find Swedish meatballs, German Schnitzel and French onion soup all on the menu? That would be the Bridgeport High School International Fair. Sponsored by the BHS French and Spanish departments, the annual event was held Wed., Nov. 16 at the high school. Foreign language students and their parents – a total of 235 people – showed up for the around-the-world cultural experience. First, guests were treated to a smorgasbord of foods from across the globe. From salads and appetizers to entrees, sides and desserts, the dishes were prepared by students and/or their parents.
Following dinner and words from event organizers BHS French teacher Madame Deanna (Perine) Garrett and BHS Spanish teachers Alicia Kidd and Rachel Bugaj, students received “passports” to utilize during their journey throughout BHS classrooms, where student-led presentations on various countries were featured. Using props, mementos, and interactive activities, much was learned about life in other countries.
“It’s like this collaboration between the French and Spanish programs and all these students who may not have class together. They get to see each other’s presentations, eat a meal together – food from other countries – so that’s a great experience,” Bugaj said. “Also, those students who decide to do presentations get into it and wear specific type of dress from their country and that really helps students see there is more to the world than what we know here in Bridgeport, WV.”
Student Sofia Rubi said she thinks events like the International Fair are a great way to showcase the diversity of our community and to encourage students to think globally.
She and her sister Stella Rubi did a salsa dancing demonstration to share their Hispanic culture. Their dad moved to the U.S. from Nicaragua when he was a boy, and their grandparents still live there.
“I’ve had the opportunity to visit there a few times with family,” Sofia said. “Food and music are an essential part of the culture. I love cooking traditional dishes 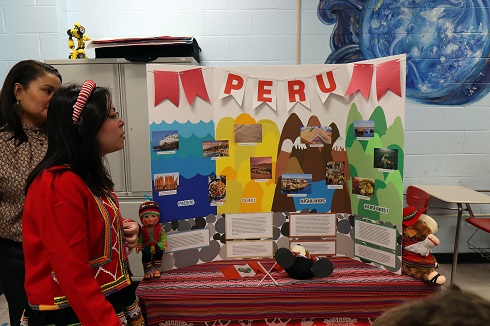 with my grandmother and listening to Latin music when she visits.”
A BHS senior, Lauren Seti said she has featured Mexico in her demonstration every year.
“Although I’ve never been there, I have become more familiar with the country through my Spanish classes at BHS,” she said. “I took three Spanish language courses and became very interested in the culture and it’s really cool to get to spend the time on a project that allows you to examine the different ways people live their lives.”
Something about Mexico that is fascinating to Seti is Dia de Los Muertos – Day of the Dead.
“It’s a very popular holiday/celebration in Mexico in which the families celebrate the lives of their lost loved ones,” she said. “They remember the times they shared together and create an alter and fill it with all of the loved one’s favorite things to celebrate them.” 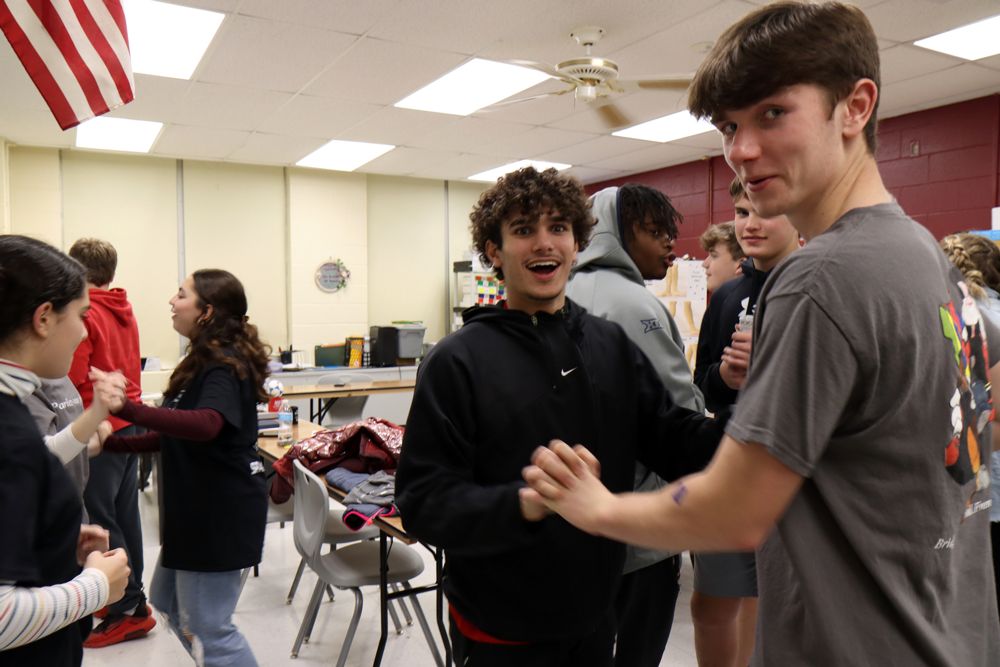 Madison Looker also participated in the fair. She said the event allows students studying French or Spanish to learn about countries where those languages are spoken.
“Also, there aren’t just Spanish and French speaking countries involved in the fair, so those presenting about countries that don’t speak those two languages may interest those attending to learn more,” she said.
BHS Counselors Kristina Robinson and Jenna Edwards were also on hand offering information on careers associated with foreign language.
Another great aspect of the International Fair is the Pulsera Project.
“We get handmade bracelets from artisans in Guatemala and Nicaragua and sell those at the International Fair,” Bugaj 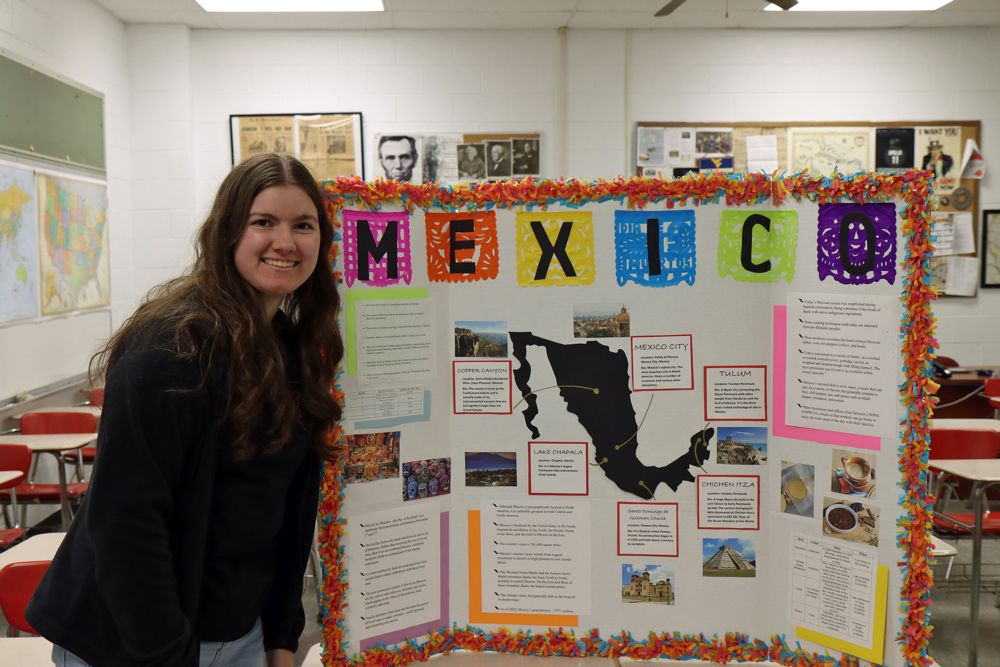 said. “All the money made from that goes right back into the artisans in Guatemala and Nicaragua.
Editor's Note: Photos are by Joe LaRocca and Madison Looker. Many more photos coming to Connect-Bridgeport early in the week.