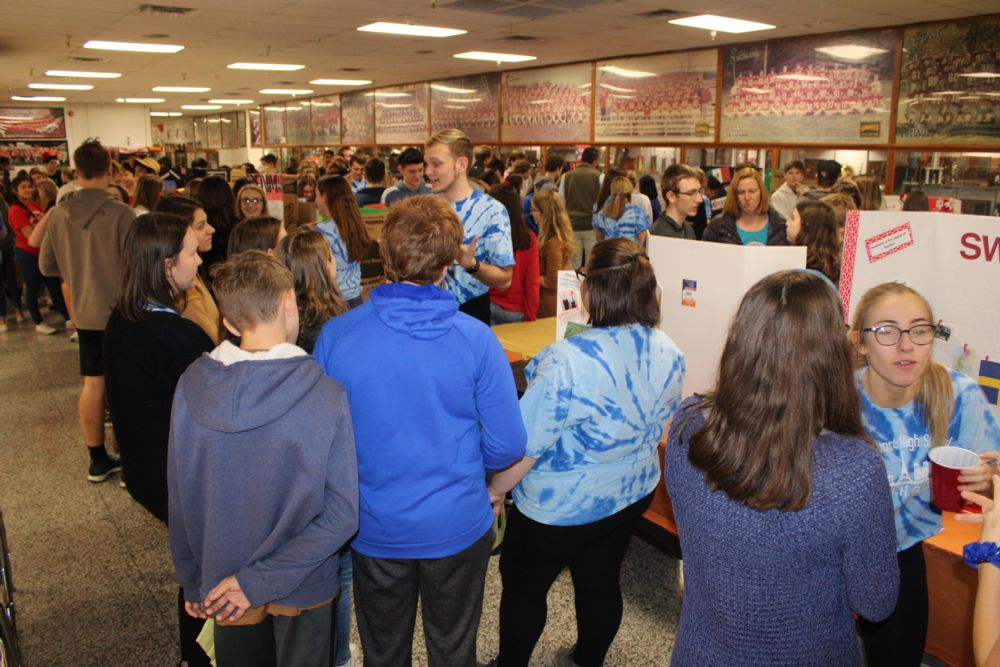 Kathallynn Tran’s parents came to the U.S. from Vietnam when they weren’t much older than she is. She’s never been across the globe to 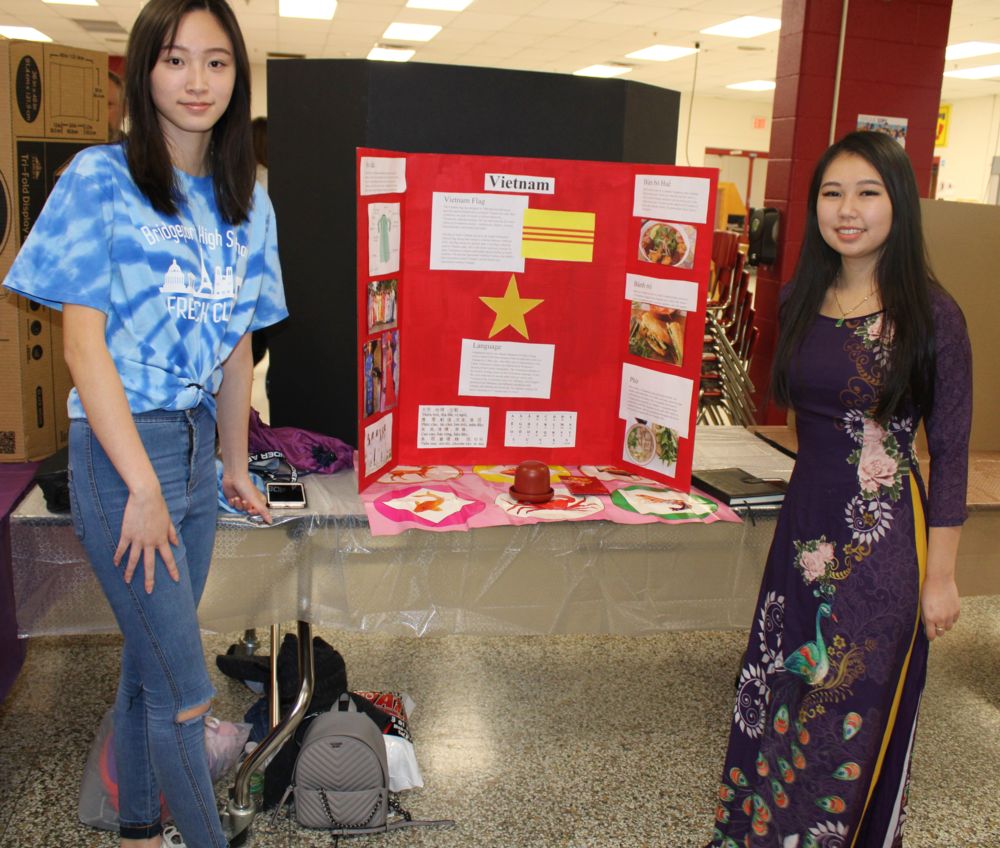 visit, but she is interested in learning about her culture. A BHS junior, Tran was one of about 20 presenters at Wednesday night’s Bridgeport High School International Fair. She and Tiffany Chen, also a junior, shared information about the country which shares land borders with China to the north and Laos and Cambodia to the west.
A fun fact, Tran said, is that the Vietnamese language consists of six phonetic sounds.
Paislee Adlington’s display and presentation featured Norway and Denmark, both of which she visited this past summer. She said even 4,500 miles from home, she noticed similarities with her hometown.
“In Copenhagen, which is in Denmark, I liked the laidback feel of everything,” said the BHS senior. “It felt like a larger version of Bridgeport; like a small hometown feel on a larger scale.”
It was the architecture in Norway which made the biggest impact on her. The 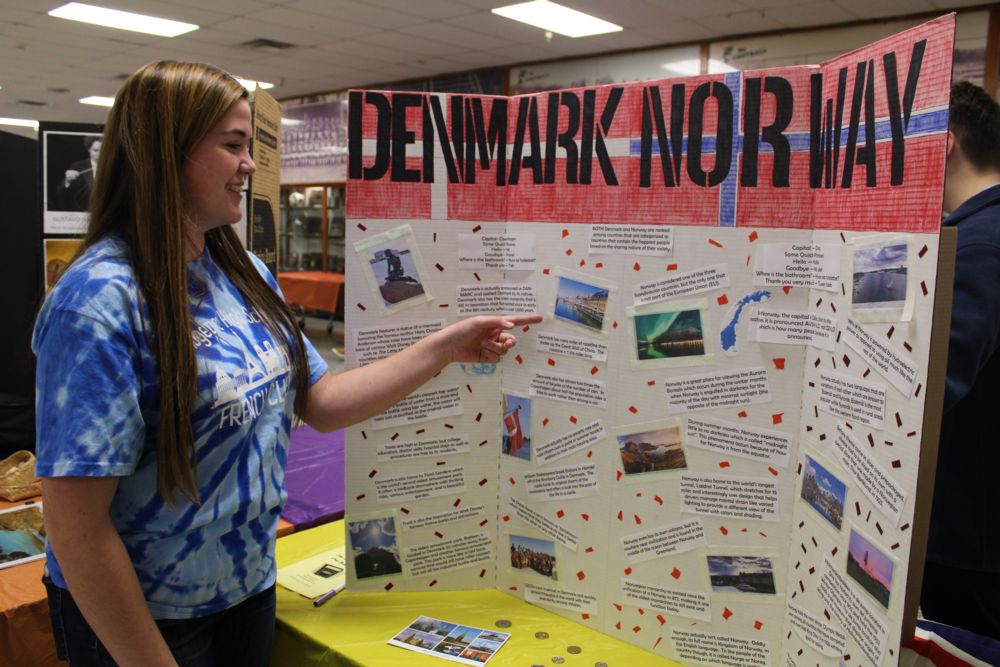 buildings were unlike anything she had ever seen before. The Oslo Opera House features a unique, cosmopolitan design with a walk-on roof.
A fun fact, Adlington said, is that Norway holds the most medals won in the Winter Olympics. In 1928, the Norwegian king won one of those medals for sailing.
Madame Deanna Garrett, French teacher at BHS, said this year’s International Fair drew more students and parents than ever before. An estimated 175 individuals attended the event, which started with a buffet of international entrees, side dishes and desserts. After sampling the fare, all participating students were provided a “passport” and encouraged to visit each presentation, where they received a passport stamp.
“The kids love it and they spread the word every year, bringing in more and more kids,” she said. 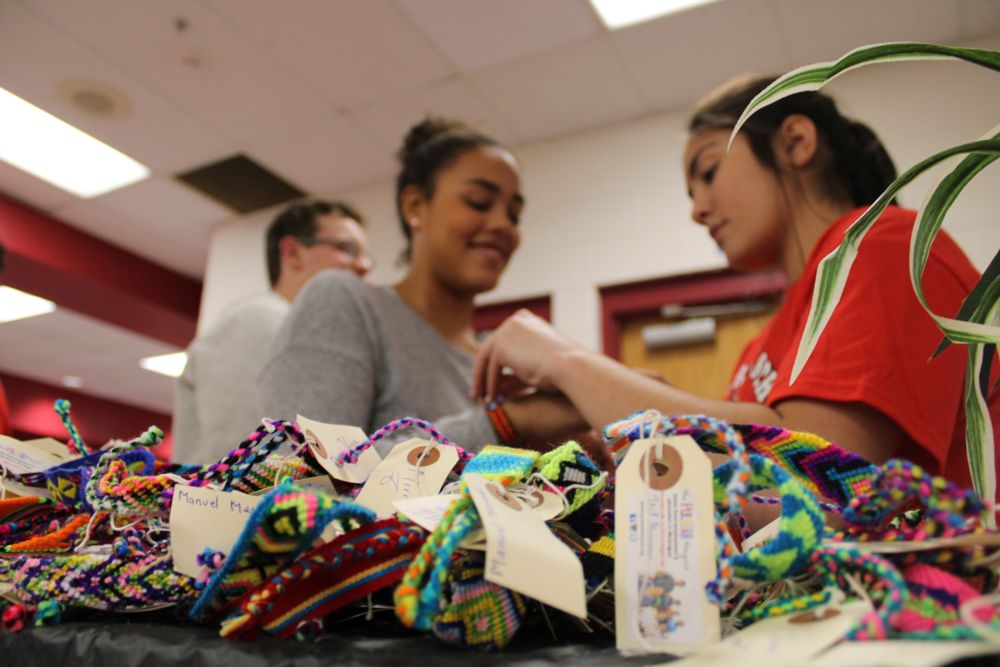 Garrett said it’s a fun, educational evening which sparks global interest in the students.
Sophomore Emma McNally loved sampling all the foods. Her favorite was couscous, which originates in northern Africa.
“The food is very different and you get to try a wide variety,” she said. “It’s always nice to try new things and learn about different cultures and how they differ from how we do things in the U.S.”
In addition to learning about other countries, the students and guests were provided the opportunity to directly support Nicaragua residents through the Pulsera Project.
“Artisans there make the bracelets and send boxes of them all over the world,” said Emma Romano, BHS junior. “Each bracelet costs $5 and all the money goes 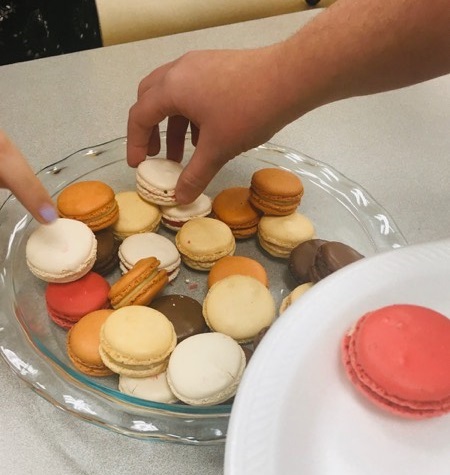 back to the artists and their families, who use the money to fix their housing – build a house or maybe buy a house. The project also works with women, helping them become prominent figures in their communities and it also helps with environmental sustainability. It’s really an awesome project.”
The colorful bracelets are available for purchase at the BHS cafeteria at lunchtime today and tomorrow. Others interested in making a purchase can contact Mrs. Alicia Kidd through the BHS office.
“This is our second year for the project,” Romano said. “Last year, we raised over $800 and we are hoping to reach our goal of $1,000 this year.”
The International Fair gave Kailey Wilfong and Maizze Christie an opportunity to teach others about Poland. Wilfong has a good friend who is from the central European country and Christie’s family is of Polish heritage. The girls love the fact that fashions are so colorful in Poland and find it interesting that Poland disappeared from the map in 1795.
A fun fact? Perogies originated in Poland.
The theme of the International Fair is “The World in Our Backyard.”
“It’s just one thing we do to make our kids globally competent, so that they realize there’s far more to the world than just our backyard here in West Virginia,” said Jenny Santilli, BHS Spanish teacher. 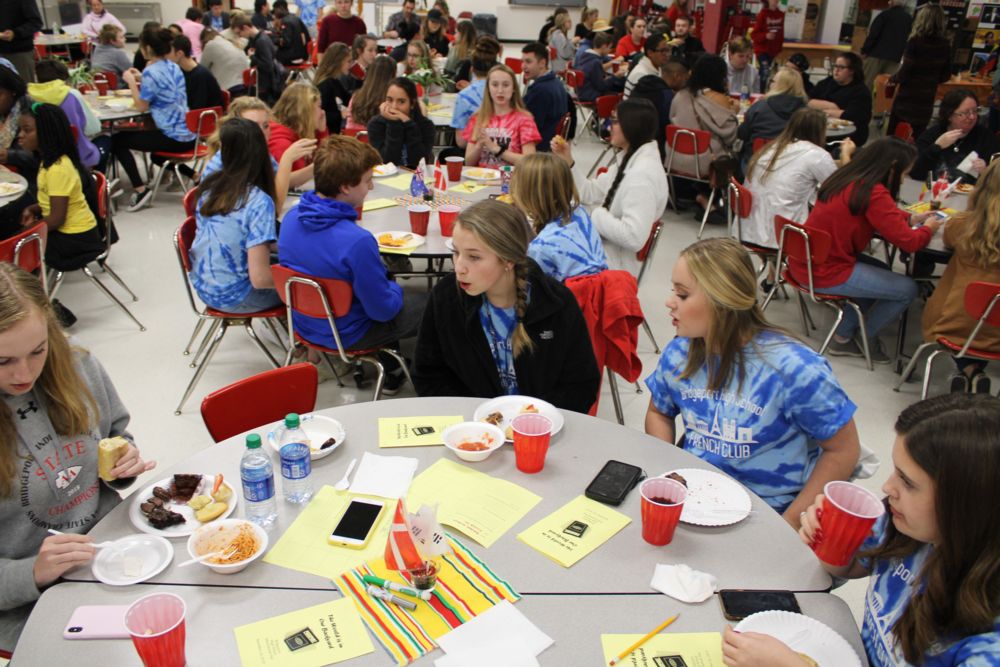 “Some kids in this building are fortunate. They can travel or they’ve come from other countries, but so many of our kids can’t travel, so we do our best to bring the world to them.”
Alicia Kidd, who also teaches Spanish, along with Santilli and Garrett, worked with their students to organize the fair. They said the event is a quality one because of the widespread involvement and support of students and their parents. They also thank Mrs. Renee Mathews for her administrative support.
See more photos in the gallery below.