Severe weather can strike at a moment’s notice.
The City of Bridgeport however has taken measures to make sure it is as prepared as possible when a storm hits.
At last Monday’s City Council meeting, Tony Edwards from the National Weather Service in Charleston, presented Tim Curry, Bridgeport’s Director of Emergency Management, and Council with a sign that designates Bridgeport as a StormReady Community.
Bridgeport is just the second city in the state to earn the StormReady designation. Beckley was the first one. 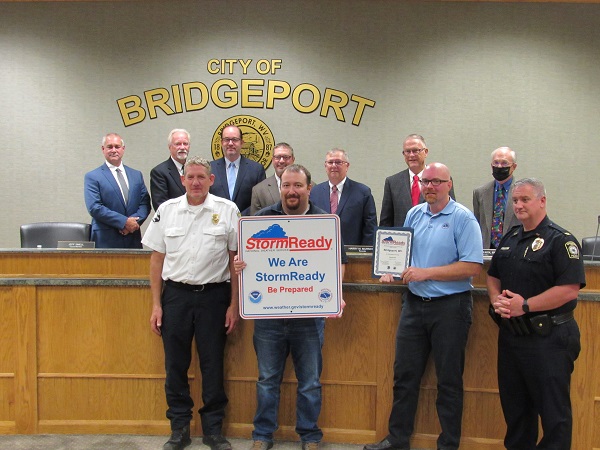 “StormReady communities are better prepared to save lives from the onslaught of severe weather through advanced planning, education and awareness,” Edwards said. “I met Tim about a year ago. In December he approached me about this certification and thanks to Tim and his diligence, we’ve worked together to make Bridgeport a more weather-ready community.”
Edwards said Curry already had a great plan in place for the city before leading the effort to get weather radios in the schools and having a weather spotter class, which took place at City Hall last spring.
“You guys are a little way from Charleston where are radar is located so sometimes you have looked at the radar then looked outside and things didn’t jive too well,” Edwards said. “It’s important to have weather spotters in the community that can relay reports back to us.
“It’s all that plus the emergency services plan that has made your community StormReady. Not stormproof, but are ready for what come at you.”
Curry said he was honored to be a part of the StormReady designation but it was something that he didn’t accomplish on his own.
“This is great but it wouldn’t be possible without the support of our citizens here in Bridgeport,” Curry said. “It’s a team effort here from all of us that work for the City to check off all the boxes to get everything done and get the award.
“It means we are committed to be a StormReady community. We are committed to being prepared. We are committed to warning our citizens when severe weather is happening and we have a really good, strong working relationship with our National Weather Service partners.”
The process took about a year according to Curry. In addition to weather radios and storm spotter class, the City had to document all the alerting systems they have and join some of the National Weather Service’s distribution lists.
“We also have weather radios in a lot of the City buildings,” Curry said. “There are several here, one in the police department, one in the fire department, The Bridge, the pool. This was something extra we did on top of putting them in the schools.”
Weather radios are a secondary means of alerting. Weather updates are broadcast on a radio frequency and will alert when there is a weather warning. When there is a warning, it lights up, flashes, let’s you know of the warning and they have a battery back up so nothing will be missed in the power goes out.
Editor's Note: Curry (second from left) accepts the StormReady award on behalf of the city from Edwards. Flanking them are Bridgeport Fire Chief Phil Hart and Bridgeport Police Chief Mark Rogers. Back row from left to right: Councilman Jon Griffith, Councilman Don Burton, Mayor Andy Lang, Councilman Jeff Smell, City Recorder Hank Murray, Councilman John Wilson and City Manager Brian Newton.