When the Bridgeport High School Band marched into Friday night’s game, there were some noticeable differences.  Although nearly all of the members participated in the first game of the year, but their ranks were reduced to allow for additional spacing, they were all wearing masks, 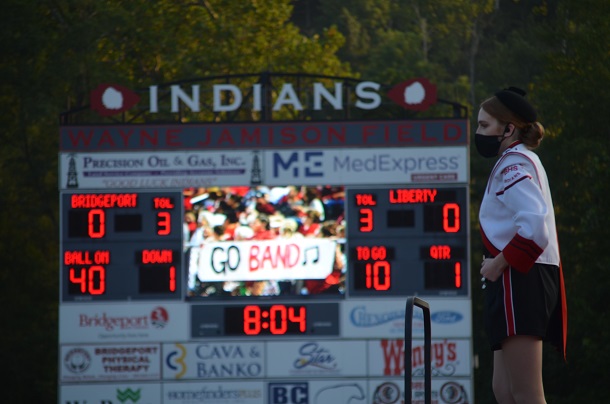 and members were on both the bleachers and the field in order to maintain social distancing.
The band was also limited on when they were allowed to play, sticking with only the percussion section during the game and the entire band playing pre-game.  Even though they were allowed to play at half-time, the spotlight on Friday was reserved for seniors of both the football team and the band members. Altogether, 13 senior band members were among those recognized, an honor that usually takes place during the last game of the season.
“As a parent, I am so thankful they were able to do senior night early,” said Seanna Pugh.  “With so much uncertainty, we didn’t want them to miss this milestone.”
Long before Friday’s game, members of the band were already adjusting to new guidelines.  Director Chris Hayslette did a wonderful job of 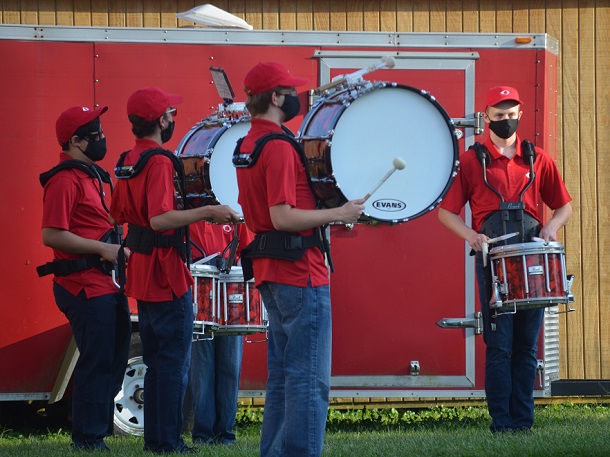 coordinating practicing efforts through online platforms through the spring and summer and continues to be flexible with limited practices.
“Rehearsal time has been cut by about 75 percent,” said Hayslette.  “We have only had five full band rehearsals and have limited rehearsal times to two hours. It has taken a lot of meetings, emails and texts to coordinate member schedules.”
In addition to the adjustments the band made at the game, they are also limited to how long they can play during class time, with breaks for clean air after 30 minutes.  They continue to have some online classes and Hayslette hopes to find ways to maximize both in-person and virtual practices to be ready for the next performance.
Despite all the challenges, band members did a great job Friday night.  They sang the fight song masked up with each touchdown and represented the student section well by cheering on the team.
“Band kids always find a way to follow the rules and still have fun,” said Pugh. “I have been involved with these kids for six years and they never fail to impress me.  They do what needs to be done no matter what and to me that shows great character.”
Editor's Note: Photos show the band during pre-game, above, and preparing outside of BHS prior to the game on Friday.