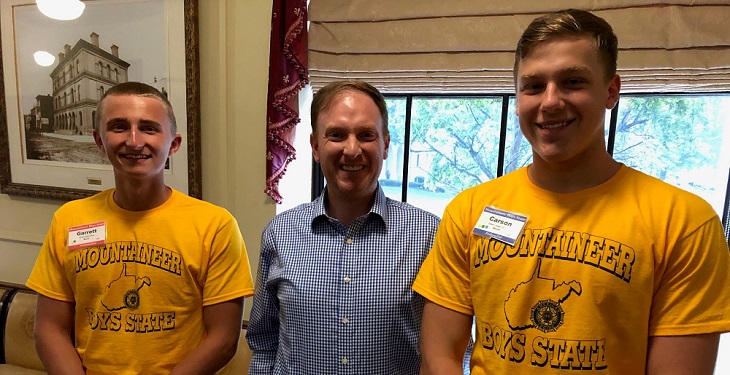 Editor's Note I: Pictured in Charleston today, from left, are Boys State Agriculture Commissioner Garrett Davis of South Harrison High School, Harrison County native and State Auditor J. B. McCuskey, and Boys State Governor Carson Winkie of BHS. Secretary of State Mac Warner is hosting Governor Winkie and the other student leaders making the day-long trip to the state capitol in the Governor’s Cabinet and Conference Room in the Secretary of State’s Office.  Boys State representatives are meeting with several statewide office holders, Justice administration officials, and legislative leaders. Photo above courtesy of Mike Queen. The story below ran yesterday morning on Connect-Bridgeport.
Getting elected to an office at the 82nd American Legion Mountaineer Boys State program at Jackson’s Miller in Lewis County shouldn’t be a surprise on a few fronts for Bridgeport High School senior-to-be Carson Winkie.
After all, all of his brothers were elected officials. His father and grandfather are also past elected officials of Boys State in New Jersey.
It also shouldn’t be a surprise Winkie got the top honor as his father confirmed that Carson Winkie was elected governor – the top elected position. Not only does Winkie have leadership qualities he’s shown at Bridgeport High School, but this marks the second year in a row that a Harrison County student has earned the position. 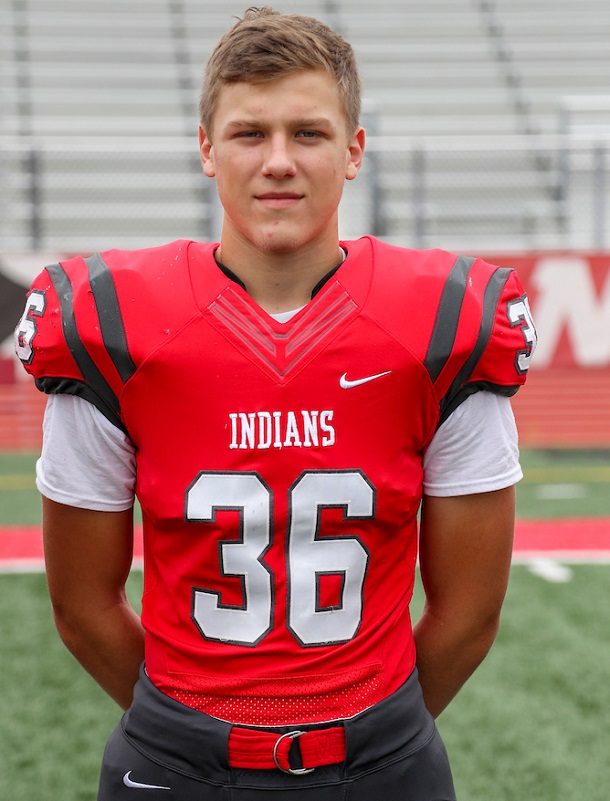 Last year, Liberty High School’s Connor Wickline was elected.
Winkie, along with other top elected officials from Boys State, will be in Charleston Thursday (June 13). They will be meeting with various top elected officials in the state’s capital along with other duties.
For Winkie, assuming a leadership role is not new. He has served as his class president since middle school and did so his freshman, sophomore and junior years of high school, according to his father Ken Winkie. The reason he’s not the senior class president is that he will be serving as the student body president for his senior year.
Winkie, who is representing Monroe County at Boys State, has also been lauded as a leader on the Indians’ football team. Coach John Cole on more than one occasion has sang Winkie’s praises for his ability and being one of the team’s smartest players. He's also been a regular for Coach Jon Griffith and the BHS track program competing in shot put and discus.
As for past history with his family at Boys State, here’s where it gets interesting. He’s three brothers all attended West Virginia Boys State. Brother Collin was Secretary of State, Mitchell was Attorney General and Marson was Bank President.
The history goes back further than that. Father Ken was a 1981 New Jersey Boys State Mayor where his unit earned the gold flag for most spirt. And Carson’s grandfather Paul, 82, a first generation American was a 1953 attendee of the New Jersey Boys State.
“It’s incredible news,” father Ken said. “It’s a surprise in one respect and at the same time it’s a good feeling knowing that as you’ve watched him grow up you could see him assume leadership roles and have a genuine interest in caring for others.”
Leslie Winkie is Carson’s mother. Ken said they’re thrilled with what’s taken place and are also thrilled with Boys State.
“It’s great that the American legion has an ongoing program like this to get young men and women involved in a program that demonstrates how a free society works,” said Winkie. “Sometimes, kids don’t realize just how important this is.”
The American Legion Mountaineer Boys State (ALMBS) is the West Virginia version of The American Legion’s Boys State program. The American Legion Boys State has been a program of The American Legion since 1935. ALMBS was founded in 1936 and holds the second oldest charter in the nation.
At the American Legion Boys State, participants are exposed to the rights and privileges, the duties and the responsibilities of a franchised citizen. The training is objective and practical with city, county and state governments operated by the students elected to the various offices. Activities include legislative sessions, court proceedings, law enforcement presentations, assemblies, bands, chorus and recreational programs.
Editor's Note II: Carson Winkie is shown above at the start of his junior year for Indians football media day. Photo by www.benqueenphotography.com.