Bridgeport was among several fire departments in the area that assisted the City of Clarksburg during a massive Easter Day fire that destroyed multiple houses. The fire was called in to 911 at 6:15 p.m. on South Howard Street.
Battling the blaze lasted well into the overnight hours before fire personnel left the scene. Nutter Fort and Stonewood’s departments also assisted on the scene. 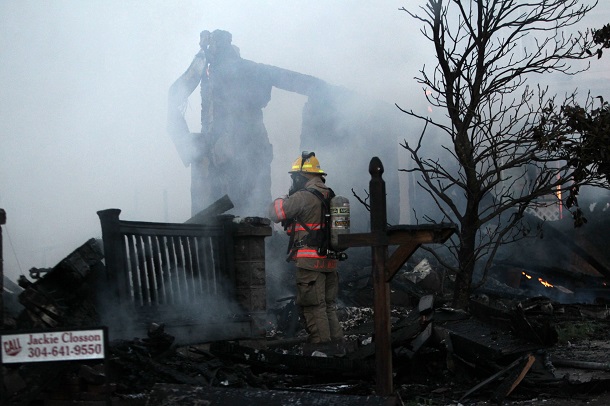 When it was over, three homes were declared a total loss. Several other homes and vehicles were also damaged.
“We sent three guys and a ladder truck,” said Bridgeport Fire Chief Phil Hart. “They were there for several hours.”
One of the members of the city’s staff that assisted required medical treatment. Hart said the firefighter was transferred to United Hospital Center for heat exhaustion by the Harrison County EMS.
“He was treated and released the same evening,” said Hart. “As of now, he’s doing well.”
Hart said many factors can lead to heat exhaustion. In this case, he said the fire had severe radiant heat, the temperatures were higher than normal, and it was extremely labor intensive.
“On top of that, those who were there were physically exerting themselves to the highest level,” said Hart.
Hart said he was unhappy to see the devastation but was glad his department could assist.
“We’re happy when someone calls for assistance and we can help. In return, we know that we will rely on major assistance from the outside when we have a similar incident,” said Hart. “The bad part is seeing people lose their homes, their property.”
Editor's Note: Photos with this story by Ben Queen Photograpy.