By Connect-Bridgeport Staff on November 25, 2020

With the weather turning, the evening starting sooner and the holiday season at hand, Bridgeport City Manager Randy Wetmore is offering some cautionary words to the community. He is asking those out for physical activities along the city’s roadways and those driving them to be 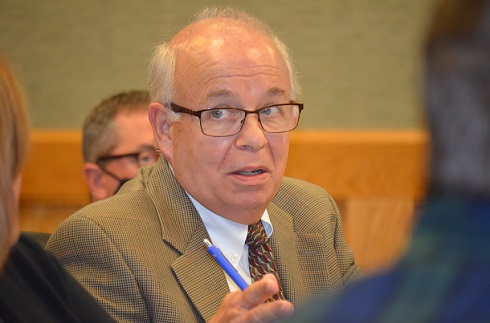 more vigilant.
“With it getting dark shortly after 5 p.m., you still have people exercising with a run or a walk and many out riding their bikes and doing other various forms of activity, particularly with the weather being nice on many days, we just want people to take proper safety precautions,” said Wetmore.
The precautions are basic. He said for those out running, walking, riding bikes or even taking the dog for a stroll to try and wear reflective clothing or perhaps carry a flashlight. As for those driving, Wetmore is asking for drivers to simply be on the lookout.
“We want people to be seen,” said Wetmore. “We want those enjoying the outdoors to have a safe environment for everyone.”
Wetmore said there have been no complaints he is aware of to the city regarding issues with those out for a bit of casual exercise. Instead, he emphasized it is a reminder to get everyone back into habits that help with safety as daylight hours are at a minimum.
Editor's Note: Shown is City Manager Randy Wetmore.