A loyal alumnus and his wife have continued their history of giving to West Virginia University with a $6 million gift that will expand opportunities for students, increase support for faculty, research and other programs in the Benjamin M. Statler College of Engineering and Mineral Resources.
In total, the Wadsworths have donated $8 million to the Statler College, along with many decades of service and time to the department and college. To honor their contributions and dedication to the department, the Department of Civil and Environmental Engineering will be 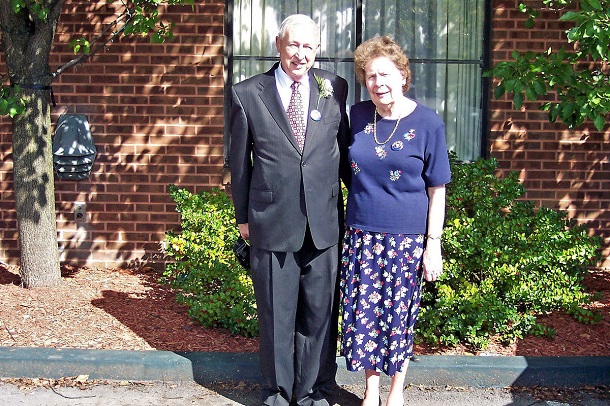 rededicated as the Wadsworth Department of Civil and Environmental Engineering, effective Nov. 8.
Maurice “Moe” Wadsworth, a Clarksburg native who earned a degree in civil engineering from WVU in 1951, is one of WVU’s esteemed alumni. Wadsworth and his late wife, JoAnn, a native of Hagerstown, Maryland, who also graduated from WVU in 1951 with a degree in psychology, met at their freshman mixer in 1947. The pair has been philanthropic supporters of the University since 1976.
“The Department of Civil and Environmental Engineering gave me the basic building blocks I needed to be successful in my engineering career,” Wadsworth said. “We are happy to be in a position to give back to the department and support the University.”
The family’s gift will provide resources that allow the department to reach new heights in scholarly and educational excellence. The funding will establish the Maurice and JoAnn Wadsworth Endowed Chair of Civil and Environmental Engineering, named faculty and graduate fellowships and the Wadsworth Engineering Opportunity Fund. The gift will ensure the department is able to recruit and retain talented and productive professors and researchers while attracting top students.
“This generous contribution made by Maurice and JoAnn Wadsworth to the department will provide our students with an experiential learning platform that will enable them to compete in the fast-paced world of the industry,” said Hema Siriwardane, professor and chair of civil and environmental engineering. “The gift will also allow us to recognize and retain outstanding faculty members. I am grateful to the Wadsworth family for this transformational gift that will shape the future of the department.”
Between 2005-2016 the family gave significant contributions to establish the Maurice A. and JoAnn Wadsworth Distinguished Professor of Civil and Environmental Engineering, the Wadsworth Graduate Fellowship and the Maurice and JoAnn Wadsworth Civil Engineering Faculty Fellow.
“This is an important gift for the College as we prepare future innovators and leaders in the field of civil and environmental engineering,” said Earl Scime, interim dean of the Statler College. “We are grateful for the generous and visionary support from the Wadsworths.”
After a two-year stint in the Air Force, Wadsworth spent his entire professional career at Gannett Fleming, Inc., in Harrisburg, Pennsylvania. His dedicated leadership helped build the company into one of the leading planning, design and construction management firms in the nation.
He served as a bridge design engineer, chief computer engineer for the transportation division, director of transportation, senior vice president for administration and president and chairman of the board. At the time of his retirement in 1996, the firm employed approximately 1,500 employees in 25 offices. Wadsworth was a professional engineer in 23 states and has authored numerous papers.
The gift was made through the WVU Foundation, the nonprofit organization that receives and administers donations on behalf of the University.
Editor's Note: Photo shows Maurice "Moe" Wadsworth with his late wife JoAnn.