According to Bridgeport City Manager Kim Haws, the results are in from a late April core drilling that was done in a slip area that’s been a problem for decades. And the results show a band-aid approach is no longer going to suffice.
During Monday’s Bridgeport City Council meeting, Haws told the governing body that the work done by Enviroprobe Integrated Solutions out of Cross Lanes had been returned. It showed what Bridgeport City Engineer Beth Fox had suspected in that there would be subsurface issues that would need a permanent fix. 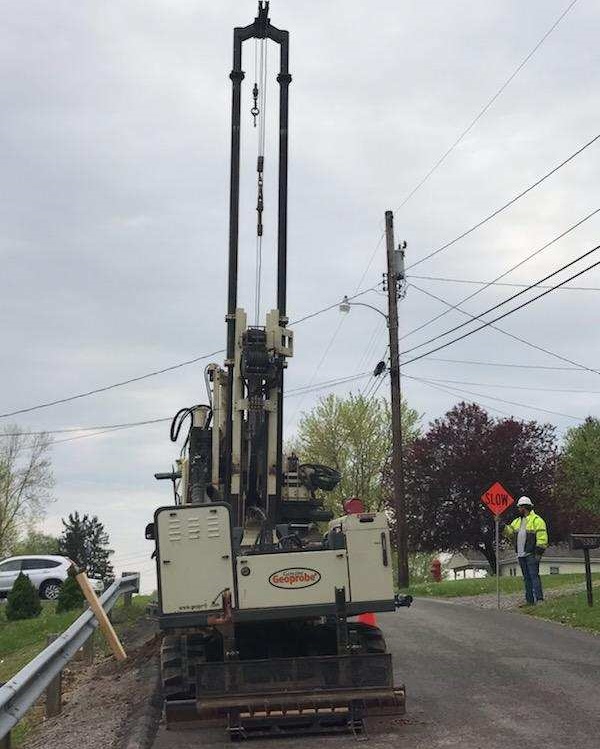 “We’ve band-aided the area hoping eventually it would level out, but it hasn’t,” said Haws. “We’ve got the core drillings that indicate we’re going to have to dig that area out.”
The area in question, said Haws, is on Long Street. The section of Long Street is the area right in front of Compton Park looking down over the hill. The area that was drilled is visible to those driving or walking past.
“There is slippage material down six to 12 feet,” said Haws. “That’s going to have to be pulled out. There will be construction as a result on that road as soon as the engineering (needed to do the project) comes back.”
Haws did not provide a timetable for when that would take place or suggest a cost that might be involved. Fox said in a story earlier this month on Connect-Bridgeport that past work to stabilize the section included a retaining wall and work done on the road surface. While those issues held for some time, Fox was certain patch work was no longer going to cut it. Haws’ statement to Council show she was correct.
The move was made not only due to it being an ongoing issue, but because of what the slip was doing this time around. Fox said it was having an impact on private property in the area.
Bridgeport has dealt with several slip areas in recent years. Currently, a slip is still in place on Route 131 near the Bridgeport Cemetery property, while another slip in the same area was addressed in recent years on property at the Bridgeport Recreation Complex that sloped down toward Route 131.
Editor's Note: Work done in April to get samples from a core drilling is shown above and on the cover photo.