Bridgeport City Council made it clear at Monday’s regular meeting that it will do everything it can to stand with current and former members of the Armed Services. 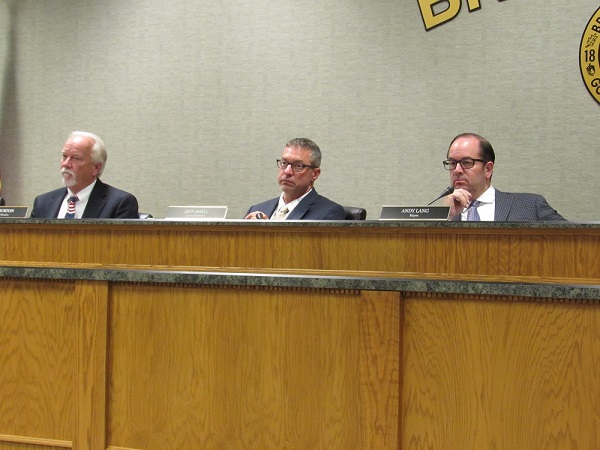 Council passed a resolution that the governing body will support West Virginia’s veterans and oppose any plan or recommendation that would cause the loss of access to VA facilities or the Healthcare services they provide.
The Department of Veteran Affairs released a report in March that among other things recommended the closure or reduction of services provided by VA facilities in West Virginia, including the Louis A. Johnson VA Medical Center in Clarksburg (facilities in Beckley and Huntington were also part of the report).
The report has been questioned and opposed by Senators Joe Manchin and Shelley Moore Capito among other state officials. And now Bridgeport City Council has joined in with those who oppose the report.
“The City of Bridgeport herby resolves that the City Council for the City of Bridgeport, West Virginia supports and honors our veterans and the selflessness sacrifice they have made in the name of our country, our liberty and our freedom,” Lang said while reading the resolution. “We have an absolute sacred duty and responsibility to see that our veterans are provided the best possible health care.”
Lang added that Council calls upon the Department of Veteran Affairs to have meaningful public hearings in the state to receive input and feedback on the recommendations prior to their publication. 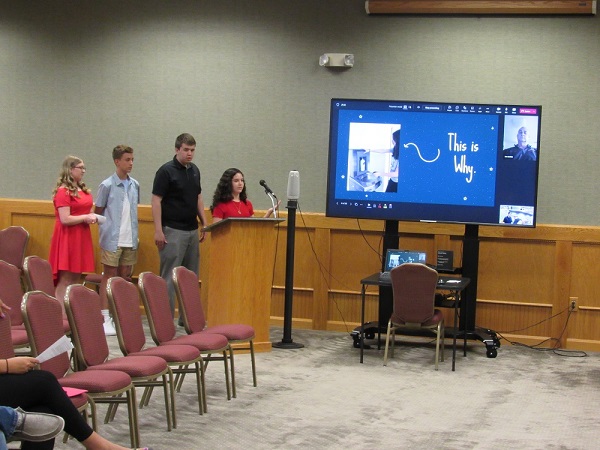 Also at Monday’s meeting,  a group of Brooke Cunningham’s 8th Grade students from Bridgeport Middle School had a presentation for Council in regard to  their H2O for Bridgeport project that would bring water fill stations to the City’s parks, The Bridge and the track at the high school.
“We are attempting to create a new opportunity for cleaner, more accessible and environmentally friendly access to water through water bottle fill up stations,” Jay Fazalare said.
More details about the project, which was well-received by Council can be read HERE
A proclamation was also made designating May 24 as Charles Taylor Day in honor of the City’s aviation mechanics.
The full proclamation can be read HERE
More about Charles Taylor can be read HERE
Bridgeport Fire Chief Phil Hart provided an annual department report. Included in the report were some statistics for 2021.
“Last year there was a nine percent increase in calls for service,” Hart said. 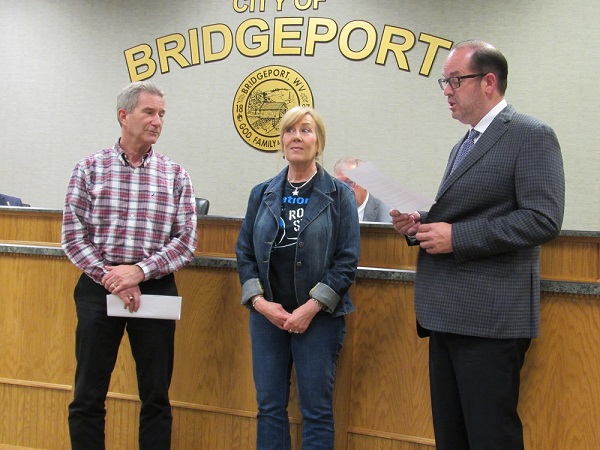 There were 2,814 calls which breaks down to an average of eight per day.  Of those 2,814 calls, 2,155 were EMS related. The Fire Department responded to 159 auto accidents in 2021 and there were 129 fire-related call services.
More from Hart’s report in the upcoming days on Connect-Bridgeport.
Three ordinances received their second and final readings during the unfinished business portion of the meeting.
The first was an ordinance amending, enacting and re-enacting the established membership rates for the Citynet Center to provide membership fees shall, unless waived by Council, be subject to an annual adjustment based on the consumer price index; and providing for rate increases for the use of certain City classes and facilities, thereby increasing the fees for lifeguard certification, outdoor turn field rental, shelter rental, Benedum Civic Center room rental and free for revenue producing activity.
Shelter rentals have not raised since 2012. The new rates are:
Dogwood - $75 per day (up from $60)
Rotary - $65 per day (up from $45)
Compton Park - $50 per day (up from $40)
Rec Complex - $50 per day (up from $40)
The Lakes - $50 per day (up from $40)
The rate for Benedum Civic Center room rentals has not increased since 2013. The new rate for a three-hour block will be $150 (up from $120) and the rate for each additional hour before 11 p.m. will be $25 (up from $20).
The rate increases go into effect on July 1. 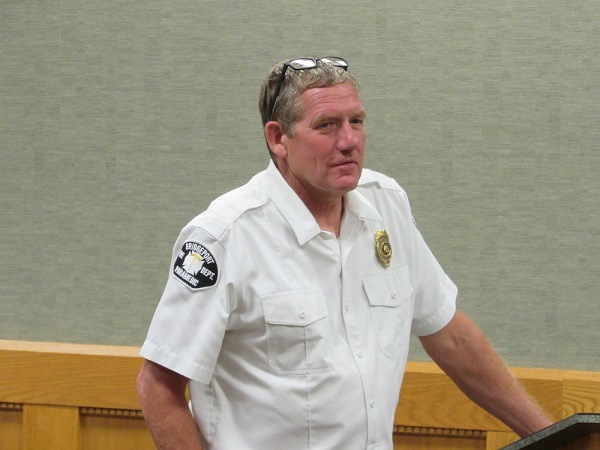 The second ordinance amends, enacts and re-enacts the codified ordinances of the City Part Seven, Article 737 by increasing the maximum grant award (under section 737.38) exterior improvement incentives to 25 percent of total investment; by providing for private entity and public entity City Economic Development grants (under section 737.40); by amending and providing definitions (under section 737.41) for the terms “business,” “public entity,” “private entity,” “private entity economic development grant” and “public entity economic development grant” by amending qualifying requirements.
The third ordinance read establishes the grade/step salary schedule for City employees, effective June 10. The grade/step salary was also discussed under new business as the first reading for an amendment that would add paid benefits and miscellaneous pay amounts to the schedule.
Council also approved a contract with Tivity Health Services, LLC to offer the Silver Sneakers Program at The Bridge Sports Complex.
Silver Sneakers is a private health and fitness membership program designed for seniors. It's available at no cost to those enrolled in a participating Medicare Advantage plan. There are more than 16,000 participating Silver Sneaker gym facilities and 70 different types of health and fitness classes available nationwide.
A contract with Thrasher Engineering in the amount of $40,000 was approved to complete a master plan for the Bridgeport Civic Center.
“This is the master plan for the pool area, parking lots, sports centers, not the Civic Center itself but the Civic Center grounds would be the best way to put it,” Parks and Recreation Director Joe Shuttleworth said.
Council approved the Bridgeport Development Authority’s recommendation for an economic development grant for Benedum Airport Authority.
The final order of new business on the agenda resulted in Council approving a resolution that memorializes Lang’s declaration of a public nuisance related to the wrongful manufacturing, distribution and dispending of prescription pain pills to the citizens of Bridgeport. A resolution was also passed that authorizes the City Manager to retain special counsel to pursue potential legal claims with respect to the wrongful manufacturing, distribution and dispensing of prescription pain pills. 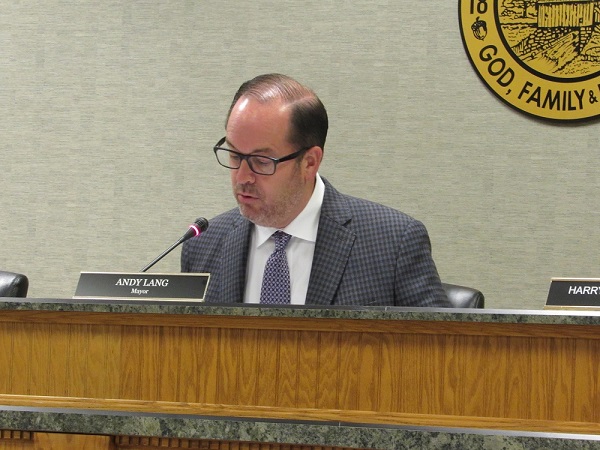 “Basically what it comes down to is there has been an ongoing litigation, class action suit that was filed by an attorney out of Charleston that has got many cities, many counties on board with this class action suit,” Lang said. “Since Bridgeport has such an outreach of use of their ambulance and public service, we were able to still be part of this litigation but we have to approve being part of the litigation.”
Prior to the start of Monday’s meeting, Pastor Alan Rosenburger of Hepzibah Baptist Church provided the invocation which was followed by The Pledge of Allegiance.
Editor's Note: Top photo shows Councilmen Don Burton (left), Jeff Smell (center) and Mayor Andy Lang (right) at Monday's meeting. Second photo is of the eighth grade students from BMS making their H20 for Bridgeport presentation. In the third photo, Lang reads a proclamation for making May 24 Charles Taylor Day as Dr. Brad Gilbert and Tracy Miller look on. Fourth photo is of Chief Hart and bottom photo is of Lang.