Although the results of Bridgeport's election came in on Tuesday, there is still one more step to take to make it official. And that will be happening next week. 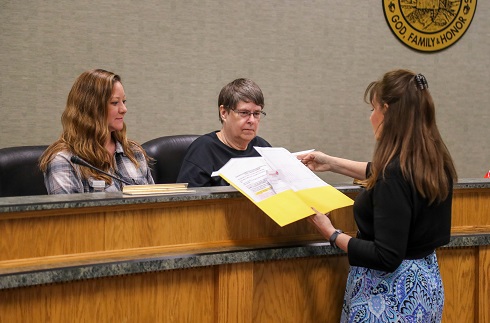 A special meeting of Bridgeport City Council will be held on Monday, June 14. The purpose of the meeting is to canvass votes to certify the election results.
The meeting will be held at 7:30 a.m. in Council Chambers at the Bridgeport Municipal Complex. The meeting is open to the public.
Mayor Andy Lang ran unopposed and will have a second four-year term after getting 580 votes.The three members of Council elected include incumbent John S. Wilson (399 votes) and newcomers Jonathan Griffith (482), and Jason Campbell (305).
Barry Balon finished with 275 votes. Balon has indicated he will run again during the next election in 2023.
Editor's Note: City Clerk Donna Krivosky, right, goes over details of the election Tuesday with Ballot Commissioners Stacey Randolph, left, and Carole Kinard. Photo by Ben Queen of Ben Queen Photography.