When you own hundreds of acres of property and have to maintain it like the City of Bridgeport, it is rare to run across a situation you have not see before. At the same time, staff does occasionally find something new to deal with.
Such was the case earlier this month at Bridgeport City Park. As one of the area residents, Milton Taylor, was walking at the facility, he was 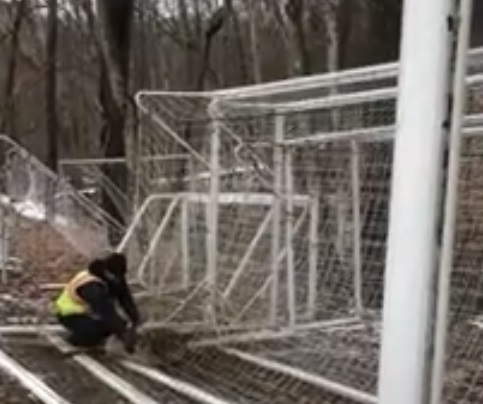 able to catch something on the video of his phone that is a rarity.
Bridgeport Parks and Recreation staff members Nick Burton and Jonathan Sigley were working in early February and it was at that time a situation came to their attention needing immediate attention. The situation involved a deer stuck in city equipment.
“We store soccer nets down at City Park near the restrooms close to the (Simpson) Creek,” said Parks and Recreation Director. “That’s when they noticed it.”
With the deer in distress, the workers went about freeing the animal. Eventually, the story had a happy ending as the deer was able to get untangled thanks to the workers cutting part of the net.
“We’ll have to replace the netting, but all is well that ends well,” said Shuttleworth. “I’m glad everything worked out with everyone, including both the deer and staff, being safe.”
Shuttleworth has been with the city since the 1990s. He said this was definitely a first.
“We’ve never had that happen before. He got his horns stuck in the netting and probably flipped out and guys cut him out,” said Shuttleworth. “I would be fine if it is a situation we never have to deal with again.”
Shuttleworth advises anyone that would come across something involving a wildlife issue to not attempt to do anything. Instead, he said to contact 911 immediately.
Editor's Note: Photo above and below is a screen shot from the video you can watch below. Video courtesy of Milton Taylor.