A second individual has filed to run for the upcoming Bridgeport Municipal Election and the first incumbent. Don Burton made it official on Friday.
The election is June 13.
Burton is the former, long-time director of Bridgeport Parks and Recreation. He made a successful bid for Council in 2019 after his retirement from the city. Now, he is looking to serve four more years.
“(My wife) Kym is still working and that allows me to be available and served and there are several projects I want to continue to be involved with,” said Burton. “I want to see through the renovations at the fire department and the consideration and planning for a new or upgraded 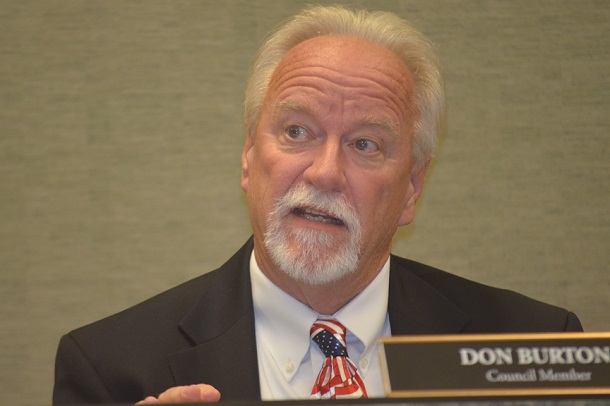 police department. I also, as most might imagine, have a very strong interest in seeing through the master plan for the Benedum Civic Center.”
Burton believes his background with the city and the recreation aspect are among the key things he brings to the table. However, he said there are additional priorities if he gets reelected.
“Certainly, we need to keep an eye on maintaining and improving our public utilities such as our water and sewer lines, which we are currently doing. That is one area we have to stay on top of and staff has done a great job of that,” said Burton. “We are still dealing with some minor flooding issues in the city and storm water management is a big issue we need to be looking to see how we can continue to improve.”
Burton worked for the Parks and Recreation Department for nearly 30 years. The entire time was spent as the director of the P&R Department. Burton is a native of Florida, having moved to Bridgeport in 1987. Burton is a graduate of Morris Harvey College, which today is known as the University of Charleston. The 67-year-old has a combination non-teaching degree in health education and physical education.
During his time with the city, Burton served on multiple city and state boards as well as serving on the board Wes-Mon-Ty Soil Conservation District. Don and his wife Kym are the parents of three children, Grant Burton, Sarah Maxey, and John Starkey. He also has two grandchildren.
Two Council seats, those held by Jeff Smell and Burton, are up for election, while the position of City Recorder, held by Harry M. “Hank” Murray, is also in play. While the outcome of the election will not be known until June, there will be at least one new face on Council.
Recently, Smell announced he will not seek another term on the city’s governing body. The father of triplets, Smell wants to be able to spend more time partaking in his children’s activities.
Bridgeport residents who wish to file to run for recorder or council in the June 13 election can file to run through Thursday, April 13, 2023. Certificates must be filed with the City Clerk’s office (515 W. Main Street, Bridgeport, WV 26330) accompanied by a $25 filing fee no later than 4:00 p.m. on April 13th.
The election is nonpartisan and any person who is a qualified voter of the City of Bridgeport may file. A qualified voter is anyone who is a minimum of 18 years of age, a resident of Bridgeport, and not under conviction of a felony or other disqualification. Candidate packets and certificates declaring candidacy may be obtained at Bridgeport City Hall, 515 West Main Street, between 7:30 a.m. and 4:00 p.m. Monday through Friday.
Anyone living inside the city limits of Bridgeport may also register to vote in order to be eligible to vote in the upcoming election. You may either go to the Harrison County Courthouse, 301 W. Main Street, Clarksburg, WV 26301 or you can go online, print out the form, and mail it to: Attn: Voter Registration Office, 306 B. Washington Avenue, Clarksburg, WV 26301. Please visit www.harrisoncountywv.com/ViewForm.ashx?Id=13to print off the form. You can contact voter registration at 304-624-8614 with any questions.
For information, contact Andrea Kerr, 304-842-8209 or akerr@bridgeportwv.com.