By Connect-Bridgeport Staff on December 02, 2019

Last week, Fairmont State University announced that the Supreme Court of West Virginia affirmed the decision of the Marion County circuit court, approving the University’s application for authorization to establish and operate a new law enforcement training academy.
Shortly after that, Fairmont State President Mirta Martin has announced that Jack Clayton has been named the Commandant of the new police academy. Clayton is the former Chief of Police at the University and currently serves as the Director of Campus Safety.
The University is beginning to take steps to offer police academy training which will allow students to become certified law enforcement 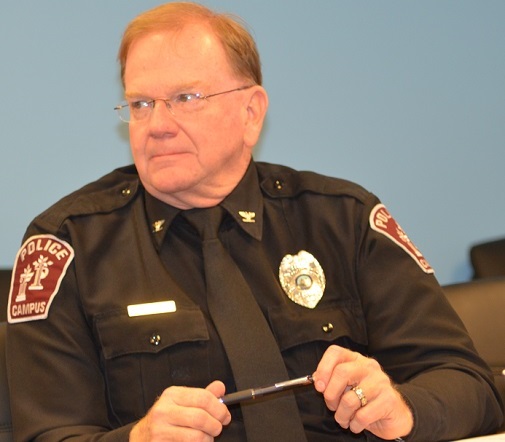 officers as they earn their degrees in criminal justice and related fields. By training students while receiving their education, it creates a valuable and highly trained workforce ready the moment they graduate.
Martin said this will in turn help local municipalities because they won’t incur the costs and time to send recruits to the academy. The impact on communities throughout West Virginia will be unprecedented.
“Fairmont State’s very mission is shaped by our commitment to transformational impact,” Dr. Martin said. “This decision allows us to train and educate job-ready police officers who can go forth and positively impact communities large and small throughout West Virginia. It truly is a win-win-win situation: Our students will receive an excellent education and entry into an in-demand career; our municipalities will get trained police officers; and the state will retain its most valuable resource – our invaluable homegrown talent.”
Fairmont State Police Chief Matt Swain said he has been working with Clayton, former Fairmont State and City of Bridgeport Police Chief, for many years on how to help students in the criminal justice program to become more job ready by the time they graduate.
"Upon successful completion of the Police Academy track at Fairmont State University, students will not only graduate with a four-year bachelor’s degree but also with law enforcement certification. This will allow them to be hired by any law-enforcement agency within the state of West Virginia,” Swain said. "Fairmont State University will be the only institution in the state to have a police academy. I am extremely proud to have the opportunity to train the police officers that will have a positive impact on our state for many years to come."
Clayton, Director of Campus Safety, said he is thrilled to see the Supreme Court ruling allow the hard work of this program finally come to life.
“The future of law enforcement is connected to more enlightened training and enabling students to receive a degree while they work through the program will give them that opportunity,” Clayton said. “While I’ve had officers who’ve held their GEDs to those with master’s degrees, there are benefits to a college degree in law enforcement.”
With exposure to different cultures, beliefs, and philosophies on a college campus, Clayton said it can help police officers to operate more objectively as well as empathetically. It also gives the students who become officers the ability to enter the job with more maturity and social awareness.
Faculty and administrators are now taking the steps to create and implement the police training into the University’s curriculum. Already having personnel on staff who are certified to train students in law enforcement is a great start.
The application for the program was filed on February 25, 2016. In April 2018 when the Marion County Circuit ruled the denial of Fairmont State’s application to start the program by the Law Enforcement Professional Standards (LEPS) Program was unlawful, the journey to the Supreme Court began.
Officials representing LEPS argued in September that there was no need for the Fairmont State academy. The University challenged the legality of the decision, saying the need of the program should not influence the availability of the program.
The University was represented by Rebecca Pomeroy with the law firm of Bailey & Glasser, LLP.
Fairmont State University is pleased to announce that the Supreme Court of West Virginia affirmed the decision of the Marion County circuit court, approving the University’s application for authorization to establish and operate a new law enforcement training academy.