By Connect-Bridgeport Staff on November 22, 2022 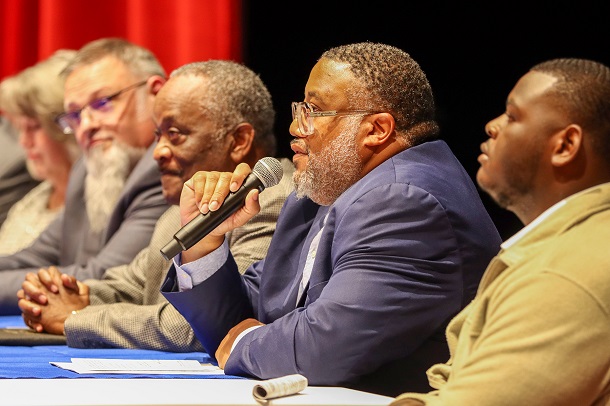 liberate others from slavery. Born 200 years ago in Maryland, Tubman was a conductor of the Underground Railroad, a Civil War scout, nurse and spy, and one of the greatest freedom fighters in our nation’s history.
After the documentary showing, a discussion panel was held with Dr. Cicero Fain, Visiting Diversity Scholar from Marshall University; James Griffin, Board of Directors Chairman for the West Virginia Black Heritage Festival; Pastor Franklin Hariston, President of the Harrison County Chapter of the NAACP; Reverend Elizabeth Lewis, Glenville Presbyterian Church; Dr. Tim Konhaus, Assistant Professor of History at Glenville State University; and Justin Collier, a student at Glenville State.
The panel discussed several topics, including the role that gender played within enslaved people, the myth of “content” enslaved people, thoughts on the current climate in terms of rights, and even their suggestions for the next historic figure who should be featured in a documentary.
“It was truly an honor for GSU to host the screening of ‘Harriet Tubman: Visions of Freedom.’ Ms. Tubman’s life serves as a reminder that our ability to bring about systemic change is not constrained by our gender, race, or socioeconomic background. Harriet Tubman calls upon us as a community to ensure that we work together to bring human rights and equity to all Americans,” said Luke Bendick, Lecturer of Social Studies Education and panel moderator. “On behalf of the Department of Social Science, I want to thank WVPB for partnering with us on this event and look forward to other such partnerships in the future.”
The 60-minute documentary was executive produced by Academy Award-nominated Stanley Nelson and Lynne Robinson and produced and directed by Nelson and Nicole London. The film is narrated by Emmy Award-winning actor Alfre Woodard.
“Glenville State University was honored to be selected as a premiere site for this documentary. It tells the story of a remarkable woman and her dedication to what was right. I encourage everyone to watch it,” said Glenville State University President, Dr. Mark Manchin.
The event was made possible by West Virginia Public Broadcasting and the West Virginia Humanities Council. “Harriet Tubman: Visions of Freedom” is a co-production of Firelight Films and Maryland Public Television with an appropriation from the State of Maryland. These programs are also made possible by Bowie State University, DIRECTV, and Pfizer Inc.
Editor's Note: Pastor Franklin Hairston (with microphone) speaks alongside other panelists, including Bridgeport's James Griffin to his left, during the open discussion following the showing of the documentary film “Harriet Tubman: Visions of Freedom” at Glenville State University on October 28. (GSU Photo/Dustin Crutchfield)