Harrison County was part of Governor Jim Justice’s COVID-19 press conference today, and not necessarily in the most positive way. Justice listed the local county among two of the areas where there are outbreaks in West Virginia.
During Justice’s comments on state sections with outbreaks, he talked as he does on a regular basis on churches and the prisons inside West Virginia. Although the churches were not listed individually, the governor said there were eight church outbreaks in six counties.
Harrison County was on that list. The five other counties with outbreaks include Fayette, Grant, Kanawha, Nicholas, and Raleigh counties. 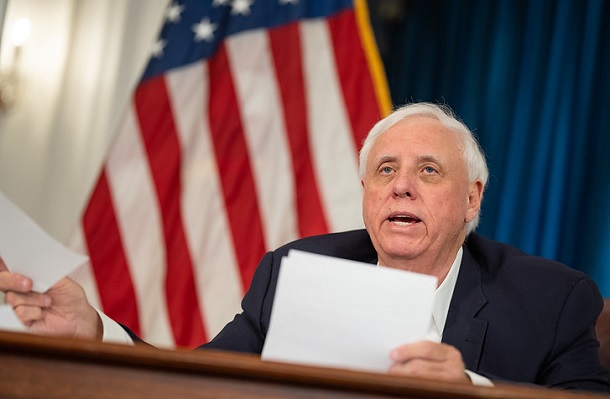 “Got to bear down. Church community step up … Where you can really step up is have your pastor call and say we’re going to call our congregation in … and vaccinate all those that want to get vaccinated. That’s what we really need,” said Justice, who emphasized a call to the state’s COVID hotline can set up vaccination clinics for churches.
Harrison County was also part of the list when it came to the prison system. Justice said the state currently has 73 inmates that are COVID positive, while 11 staff members are also positive. Justice pointed out that 23 of the inmates infected are at the Salem Correctional Center and Jail.
State Health Commissioner Dr. Ayne Amjad talked numbers with the variants that are spreading across the nation. She said the highly contagious and highly lethal United Kingdom variant of COVID has shown up in 19 counties – most of them border counties – with Monongalia, Berkeley, and Ohio counties being the top three.
Amjad said there are 142 cases of the UK variant. She said the California variant is also in West Virginia with more than 160 cases.
“From 19 to 40 is the main group,” said Amjad when talking about the demographic being impacted by the variants.
There was also discussion on the status of school and church choirs and whether they should continue. Dr. Clay Marsh, the state’s COVID-19 Czar, said there has been discussion, particularly on competition events involving high school choirs. He said there have been multiple discussions with Randall Reid Smith, the commissioner of the West Virginia Division of Culture and History, about that very matter.
“We’re trying to minimize those events being held indoors,” said Marsh. “Outdoors is safe.”
Marsh then added on to talk about church choirs.
“We should minimize singing in churches and choirs in any indoor venue with other people there. Should be outside with spacing,” said Marsh.
Choirs in schools were not the only thing discussed involving the state’s education system. Justice was asked with the spread of variants if there was consideration for additional restrictions on all extracurricular activities.
“I don’t see any need in doing that at this time ... As far as our extracurriculars, I know as a standpoint of being a coach it’s amazing that all the staff at the whole schools how people are spacing out and having masks on,” said Justice. “It’s not perfect, but it’s really good.”
Justice started the briefing reading the latest fatalities that were COVID-19 related. There were more than two dozen deaths reported since Monday. There are now 2,722 deaths in the state from the virus.
“This thing’s not over. We’ve lost 26 more great West Virginians,” said Justice.
After discussing the deaths, Justice again urged people to get vaccines. He emphasized it for those over 65 in particular.
“We have 1.7 million plus (in population). We have shots in the arms of 532,000 people. We are slightly over a third of our people right now,” said Justice. “We want to stop this thing; stone cold stop this thing. We’ve got to set our sights on 70 percent of our folks.”
Justice added that there were 242,204 individuals vaccinated that are 65 years of age and older.
“Over 75 percent (of that demographic). My goal is 85 percent,” said Justice of those above 65. “My goal is really 100 percent, but I’ll take 85.”
For more information on the vaccination, including pre-registration click HERE
For more information on free testing, click HERE
Video of Wednesday's briefing can be viewed below.
For more information on the vaccination, including pre-registration click HERE
For more information on free testing, click HERE
Video of Monday's briefing can be viewed below.