House Struck, Utility Pole Crashes Down on Vehicle as Fire Department has to Cut Passenger from Car

The Bridgeport Fire Department responded to the scene of an accident Thursday afternoon involving a vehicle running into the side of a house.
According to the Harrison County 911 media log, the call for the accident came in at 4:09 p.m.
Chief Phil Hart said the accident took place on Veterans Memorial Highway where it intersects with Oral Lake Road. The vehicle, in question, was a green Jeep Grand Cherokee. 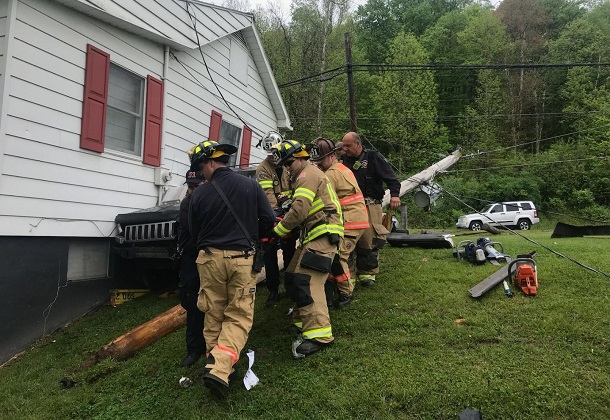 “The vehicle left the roadway, hit an electric pole and then went into a house,” said Hart. “The house was vacant at the time.”
While there were no injuries sustained by anyone outside of the vehicle, the situation did leave the area compromised. The utility pole was knocked over during the accident, requiring the lines to be secured before fire personnel from Bridgeport could assist the driver and remove him.
Hart said once the lines were secured, the male who was driving the vehicle was extricated from the vehicle. The chief said the staff used the “jaws of life” to cut the individual out of the vehicle.
The individual was transported to United Hospital Center by the Bridgeport Fire Department’s ambulance. Hart said the Harrison County Sheriff’s Department is investigating the case.