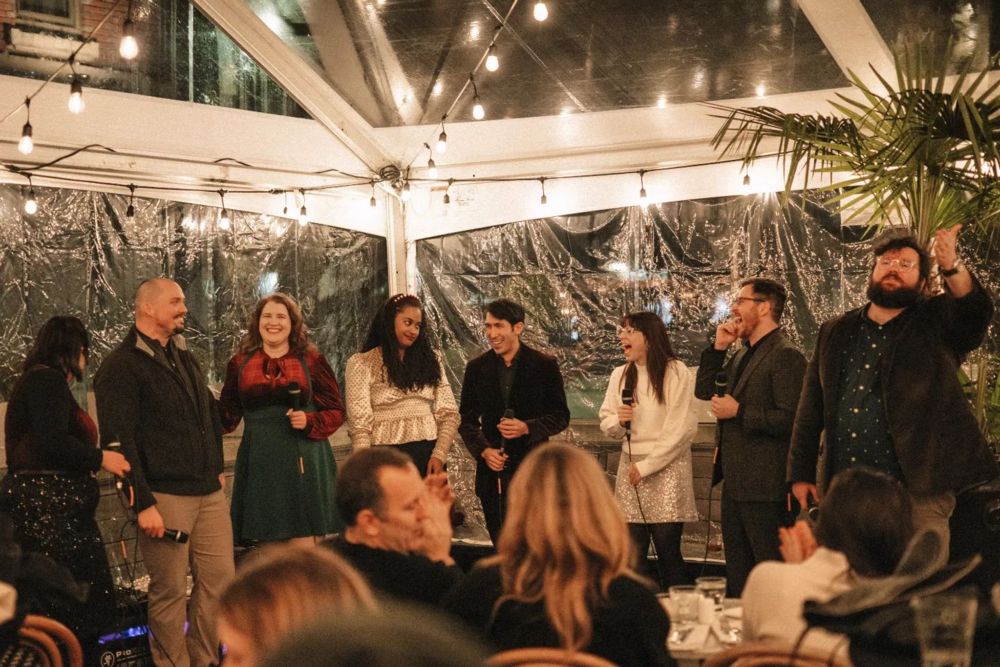 Bridgeport native Lindsay Dawson is excited to introduce the eight-member vocal ensemble Puget Sound Co. to her native state of West Virginia.
And she is equally thrilled for her home state – and hometown – to hear the a cappella group she has been a member of for the past four years.
“West Virginia is such a very special place to me and only grows more special as time goes on,” said Dawson, a 2008 graduate of Bridgeport High School. “Getting to do this – and do it at Christmastime – with all these wonderful people is really wonderful.” 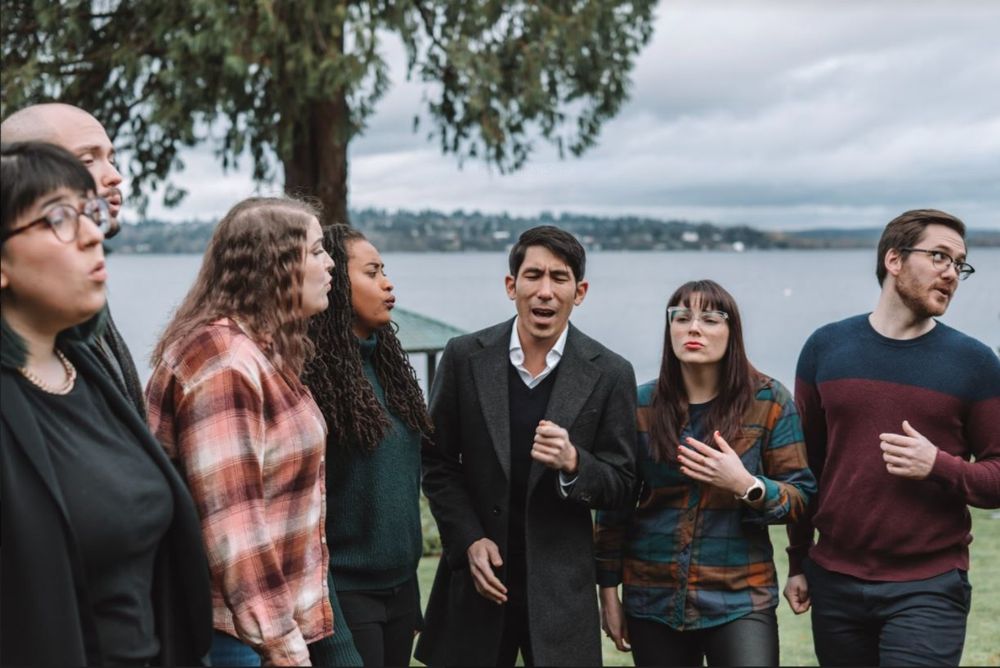 Using only their voices to cover artists like The Beatles, Fleetwood Mac and Ariana Grande, Puget Sound Co. will be in West Virginia the week after Thanksgiving. The group will make an appearance at Light Up Night, Thurs., Dec. 1 – treating townspeople to a special holiday performance from the main stage directly after the 7 p.m. tree lighting.
On Sat, Dec. 3, the vocalists will perform a 1:30 p.m. Holiday Harmonies show at at Bridgeport High School and provide a master class to BHS students. At 6 p.m., Dec. 3, the vocalists will open for Landau Eugene Murphy, Jr. at The Robinson Grand Performing Arts Center in Clarksburg. The West Virginia tour starts with a 7:30 p.m. Nov. 30 performance at Independence Hall in Wheeling and includes a 7 p.m. Dec. 2 show at the West Virginia Cultural Center in Charleston.
The performances will be generous with holiday tunes – like “Jingle Bells” and “Sleigh Ride” - but also include some of the group’s other numbers, including tracks on its soon-to-be-released CD.
“The Pike Place album is kind of a mix of everything, but I feel in a way it’s a good example of who we are as musicians,” Dawson said. “We have been very driven and motivated to create our own sound over something that might otherwise sound kind of familiar.” 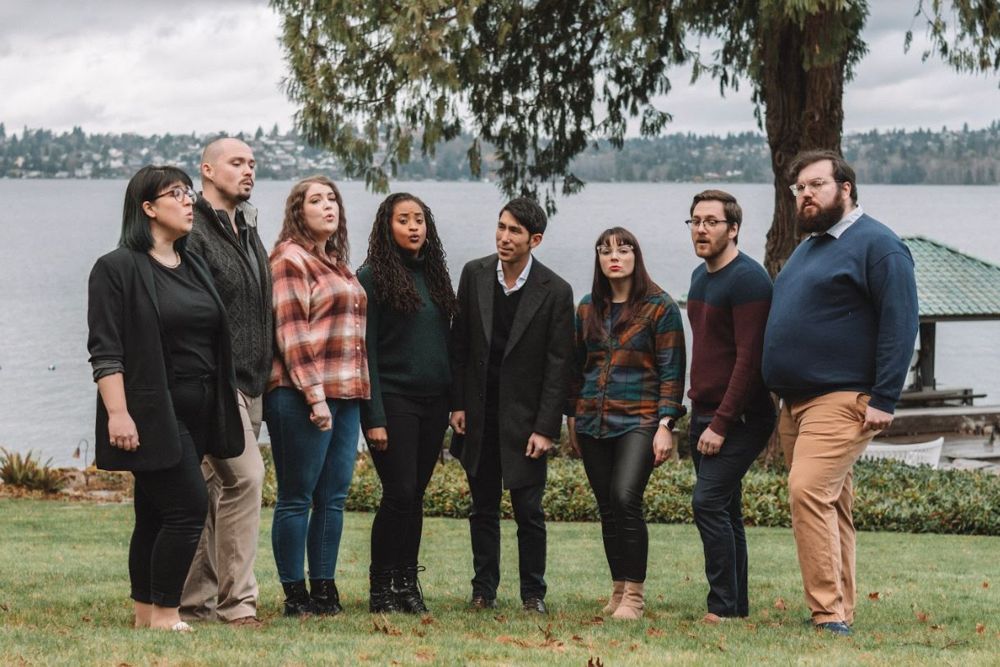 Songs include well-known classics like “Kiss from a Rose,” “Mustang Sally,” and “Rosanna,” as well as some original work.
“Our arrangers are wonderful and creative and take our own spin on those, balancing out with the more modern ‘Levitating’ and ‘Butter’ by BTS. It really is this kind of holistic musical experience.”
Dawson said music has always been important to her.
“I grew up with grandparents on both sides of the family. My mom’s dad was a theater technician and a musician. He had a rock band for as long as I can remember,” she said. “My dad’s parents always listened to bluegrass and gospel, so I grew up listening to all sorts of music and appreciating it.”
Dawson sang in the Simpson Creek Baptist Church choir and BHS Theatre. She studied vocal performance and theater studies, graduating from WVU in 2012, then obtaining a graduate degree in marketing communications.
“I moved to Washington state in October of 2017 with my partner Ty. We wanted to find a sense of home, but somewhere else. Seattle is very outdoorsy, and we wanted to see if we could make a home here.”
Dawson said she envisioned a career in arts marketing, but ultimately secured a position as associate director of marketing for a technology department.
The opportunity to utilize her vocal talent came in October of 2018 when she joined voices with some locals to perform at a wedding.
“My voice teacher asked if I would like to sing with the group,” she said. “We had such a good time and decided to sing some holiday music and booked a couple Christmas gigs.”
Puget Sound Co. was born and Dawson – a soprano – is one of three remaining founding members. Current members are Alexander Oki, Connor Hartling, Danny Lacker, Katie Gary, Sean Callahan, Shana Emile, and Taylor VanDuser; two each sopranos, altos and tenors.
A founding member, Oki serves as business manager and has created some good West Virginia ties, instrumental in creating the West Virginia tour.
“It’s been a wild mesh of worlds, seeing these people I love out there connecting with the state and West Virginia people,” Dawson said. “Alexander said he’s developed relationships with people like he’s never met – so hospitable. It kind of melts my heart to hear that.”
Dawson said he often talks about West Virginia and makes references to her home state when singing various lyrics. Next week will be a dream come true, she said.
See and hear a sampling of Puget Sound Co.'s "Levitating" in the YouTube video below. Learn more about Puget Sound Co. and purchase tickets for upcoming shows HERE.