Jon Griffith to Run for One of Three Seats on Council

Whether there will be a new member of Bridgeport City Council remains to be seen. There will, however, be a new face looking to sit in one of the council seats open for the June 2021 election.
This morning, Jon Griffith announced he will be running for one of three seats up for grabs. The position of mayor is also up for another four-year term.
“After leaving teaching and coaching for all those years, I don’t’ feel like I’m done giving back to Bridgeport,” said Griffith. “Bridgeport is my 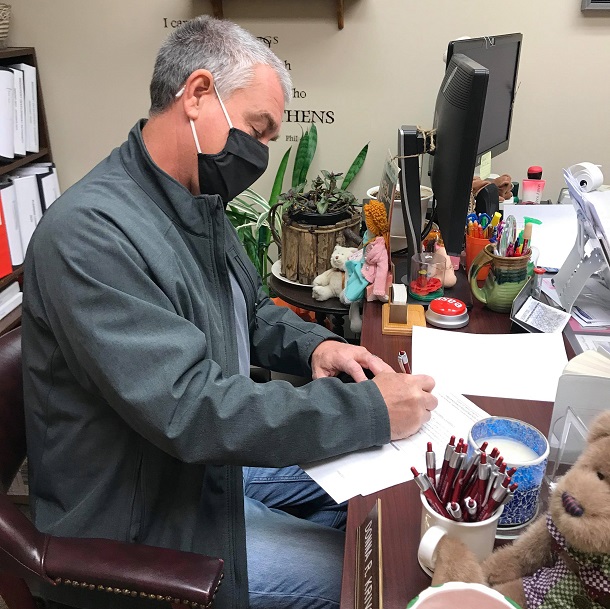 adopted hometown. I still feel the need to give back to the community and feel strongly this is the opportunity to do just that.”
Griffith is best known for his career in the education arena that spans decades. Earlier this month, he announced his retirement from coaching the boys track program after 32 years and cross country program for more than a decade. He also coached freshman football for a number of years.
The native of Charleston, who grew up in South Charleston, retired last year from his teaching role at BHS. He taught multiple subjects, including computer courses and multiple classes on the science front.
Griffith has a bachelor’s degree in Chemistry from West Virginia University. He returned to Fairmont State College after that to earn a teaching certificate that set the stage for his teaching and coaching career.
The 58-year-old is married to Heidi Griffith. They are the parents of Ben, Jonathan, Jacob, and Marinda.
Four seats are up in the election set for June 8, including that of Mayor and three seats on City Council. The positions are currently held by Lang and Council members Dustin Vincent, Robert “Bob” Greer, and John Wilson. Andy Lang is mayor.
According to City Manager Randy Wetmore, the cost to file to run is $25 and is due at the time of filing. Filing, along with paying to file, can be done no later than 4 p.m. on April 8, which is the end of the filing period.
Absentee voting applications may be requested through June 2 of 2021. All candidate packages, absentee applications, and any other information required or questions concerning the election are to be directed to City Clerk Donna Krivosky.
Krivosky can be reached at 304-842-8235. She can also be reached via email at donna@bridgeportwv.com.
Editor's Note: Shown is a photo of Jon Griffith filing today (Jan. 12) at the Bridgeport Municipal Complex, while the cover photo is a head shot of him from one of hundreds of sports events he’s coached at BHS. Both photos were submitted to Connect-Bridgeport. Connect-Bridgeport will attempt to do stories on all individuals that file for office one they have officially filed. If you have filed, contact us jeff@connect-bridgeport.com after filing to arrange for a story.