Justice Praises Educators, Staff for Getting Vaccine as He Promises Teachers Under 50 'Not Forgotten'

On a day when Gov. Jim Justice read off the names of more than 70 people that have passed due to COVID-19 complications since Mondays’ press conference, he hammered home the important of vaccines and West Virginia’s success in getting them administered.
There were several areas where Justice hit on regarding the vaccine, including educators and staff in the school system.
“I’m really proud of our teachers and service personnel getting their vaccines,” said Justice. “It’s really close to 90 to 85 percent of the people.”
The vaccine, said Justice, is currently being administered to those over the age of 50 that work in the school system. He said he hopes to wrap that age group up soon, and then begin the next phase. 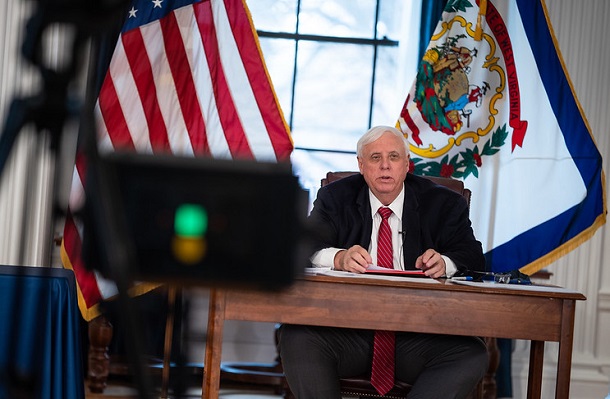 “To the teachers that are under 50, we haven’t forgot you,” said Justice. “All we have to do is get the vaccines.”
Justice said more decisions on returning to school will be coming soon, including decisions on the state’s color-coded map. He said some of those decisions could be made today after a meeting of the West Virginia Board of Education. Justice did address those wanting to see sports begin.
“If you’re not in school, you can’t play,” said Justice.
Justice said the state received 34,960 doses of vaccine Tuesday. He said he plans on making sure every dose is in someone’s arm before the weekend is over.
“We have additional vaccines coming next week. We’re pushing the UHHHS hard,” said Justice, who said the state has administered 9,885 vaccines in the last 24 hours.
Justice also announced the state is immediately dropping the age of those being administered the vaccine in the first phase involving elderly will drop from 80 to 70. He said that comes in the wake of the CDC announcing they want to the age of those elderly being in the first wave of public vaccinations to be dropped to 65.
“Next week, if we continue to push (for more vaccine) … and as quickly as we know we’re going to have the significant amount of vaccine to get to 65 (years of age), we’re going to get to 65,” said Justice.
Justice frequently touted the state’s success rate in administering the vaccine. He mentioned, as did others during the press conference, that West Virginia leads the nation in administering the vaccine.
“I think it’s an incredible, incredible accomplishment,” said Justice.
Justice also announced a brand-new program that will help renters and landlords impacted by COVID-19. The program is called The Mountaineer Rental Assistance Program and is being headed up in the state by the West Virginia Housing Development Fund.
“It will provide direct financial rental assistance to those impacted by COVID-19,” said Justice, who added that the program is “a really big deal.”
Justice added the program is not yet open. However, he added “significant money” is on the way. The governor said he was not sure how the money will flow once it arrives from the United States Treasury but will be arriving. He said the money could be available by the end of January.
“As soon as we know (the information), we’ll tell you that,” said Justice, who added there is also likely money for utility assistance as well.
With the state’s inauguration ceremony coming up with Justice set to take a second term and reports of possible protests and threats taking place nationwide in protest of the inauguration of President-elect Joe Biden, things appear to be calm in West Virginia.
“We’re not aware of any credible threats,” said Thom Kirk, the Deputy Director of Homeland Security.
There was some good news for Harrison County during the press conference. Justice said there were 11 outbreaks in churches in six counties. Harrison County is no longer listed as one of the counties and Marion County was the only North Central West Virginia county listed.
“That’s a whole lot better,” said Justice of the drop in church outbreaks.
The state’s prison system currently has 380 active outbreaks among prisoners, while 37 staff members are currently positive, said Justice.
As for the state’s re-transmission rate, or Rt, it is under the desired number of 1.0. The level is at .93.
“I don’t know that it’s been a lot lower than that,” said Justice.
After saying West Virginia was third best, Justice talked about what he did at the start of the press conference. And that was to read the names of nearly 80 people that have been reported to have died due to COVID-19 complications since Monday’s press conference.
“We’re third best in the nation, yet I just read to you 77 great West Virginians that died,” said Justice.
The 77 deaths listed since Monday brings the state’s death total to 1,671.
“Absolutely want to push you to keep these people in these prayers,” said Justice. “… These great people, they are our wisdom.”
Information on free testing can be found HERE
Video of Wednesday's press conference can be found below.
COVID-19 Vaccine Info line 1-833-734-0965