Justice has Disparaging Comments for Unvaccinated Residents as Death Totals across State Near 3,000

Governor Jim Justice once again hammered home the need for people to get vaccinated and more than once told people not to be “hard-headed” during today’s COVID-19 press briefing. Vaccine talk and discussion of death dominated the bulk of the press conference.
Justice started the press briefing reading the names of the deaths due to COVID since Tuesday’s press briefing. The number was unusually high for recent weeks, at 26. However, Justice explained that 18 of the 26 deaths are reconciliation deaths from April and May that the DHHR 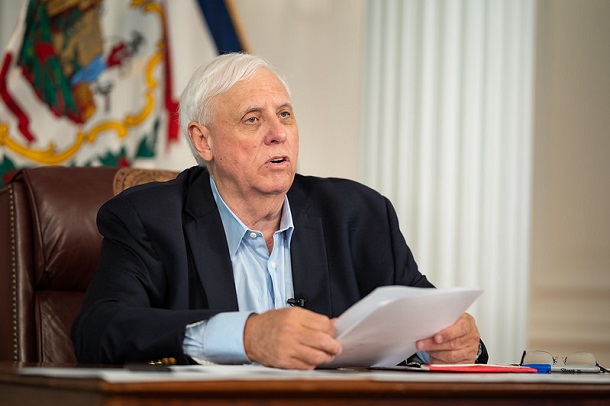 added to the total.
Even with that explanation, Justice was bothered by the death totals. He started and ended the press conference with comments on that front.
Justice pointed to an early study done out of the state of Washington early in the pandemic. The study, he said, predicted West Virginia, which had roughly 36 deaths at the time, would have just 74 deaths as a result of the pandemic. West Virginia’s death total as of today is at 2,848.
“Remember when we had that first death how tragic that was,” said Justice. “… It’s not over and you have the opportunity to make it over. What do I mean by that? Get vaccinated … I don’t care how hard-headed you are or how inconvenient it is. We’ve got to get you vaccinated.”
Justice doubled down on his comment calling those refusing to get vaccinated hard-headed later in the press event.
“If you let these 2,848 die in vain and let this thing continue because you’re too hard-headed to get vaccinated, that’s not right in my book,” said Justice.
The state’s COVID-19 Czar, Dr. Clay Marsh, said those not vaccinated should be paying close attention to what is playing out in the United Kingdom, where the Delta variant of COVID-19 from India has become the top variant. He said the variant is highly contagious and taking a toll on a specific demographic in the European nation.
“The Delta variant … it’s hitting those unvaccinated or partially vaccinated … they’re seeing a doubling of new cases caused by the Delta variant, the India variant, every eight days. It’s really targeted to those not vaccinated or partially vaccinated,” said Marsh.
Marsh said it is now the dominant strain in the world, but not in the United States. He added that there are no active Delta variant cases in West Virginia.
“We know it’s coming, and we have time to prepare ourselves,” said Marsh. “This is the time we need to step up and choose to be vaccinated.”
Justice was pleased to report that 60.1 percent of the eligible residents in West Virginia – 12 and older – have received at least the first dose of the COVID vaccine. He said the number of those 50 and above are at 76 percent, while those 65 and older are at 84.7 percent.
The 70-year-old Justice is in the group of those vaccinated. He said he believes he is living proof of it working.
“Without any question it probably saved my life,” said Justice, who said he has been exposed several times to those with COVID since he was vaccinated.
Justice also had good news in other areas in the state. He said there are just five outbreaks in the state’s long-term care facilities, while there are four outbreaks in churches in the three counties – none of which are in North Central West Virginia.
The best news may have been the numbers in the prisons throughout West Virginia. There are currently no inmates COVID positive, while two staff members are positive.
“Great work to our corrections people,” said Justice.
Information on free COVID-19 testing can be found HERE
Video of Tuesday's press conference can be viewed below.