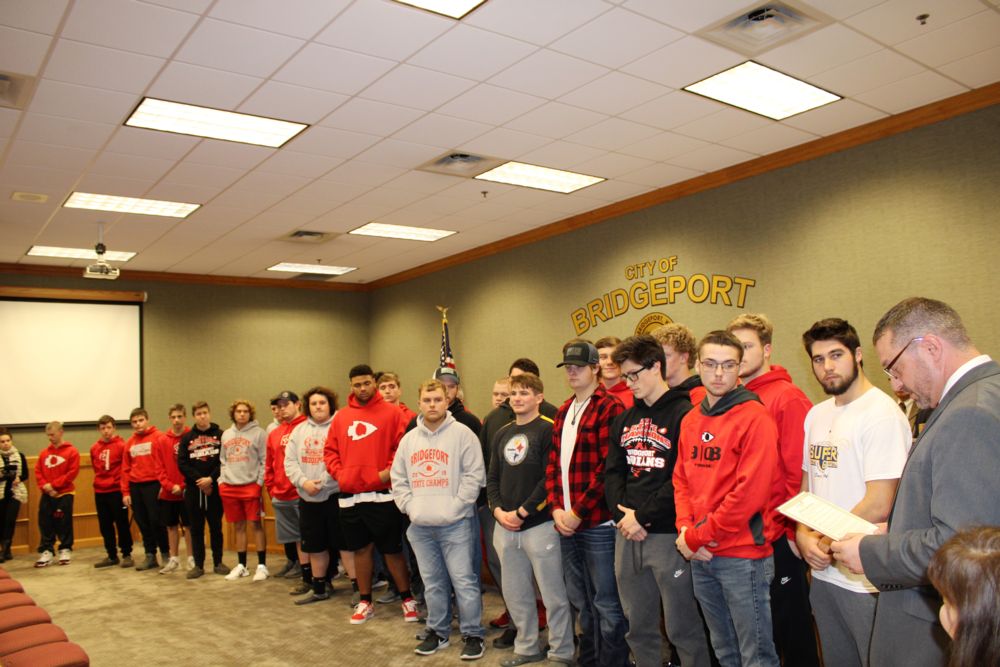 Mayor Andy Lang opened Monday’s Bridgeport City Council meeting by thanking the large crowd in attendance. The reason for the 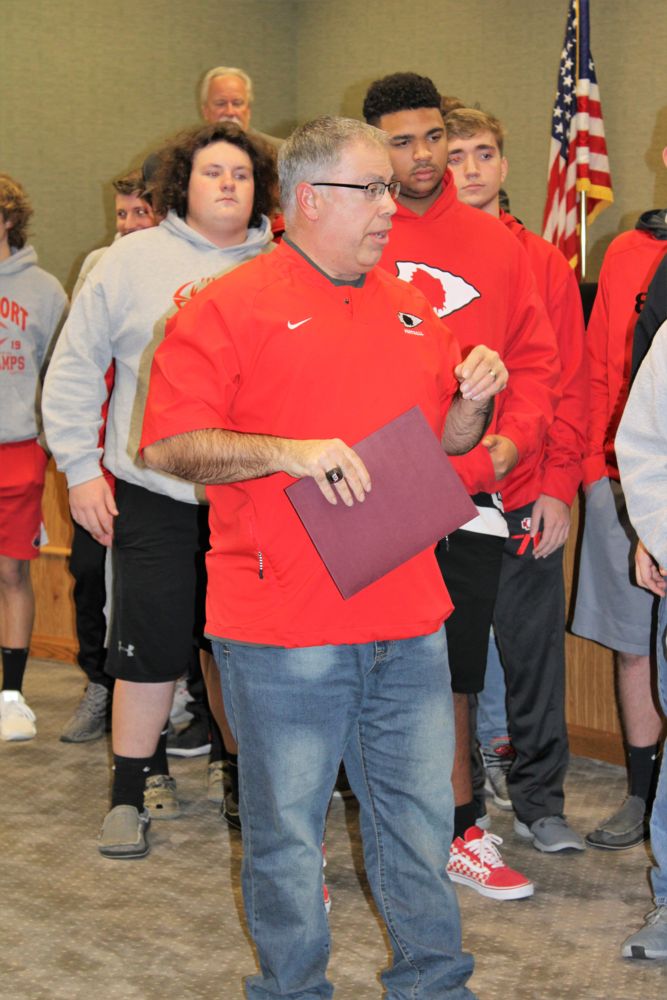 packed house was a trio of special presentations which preceded the business portion of the meeting.
A proclamation was read and presented to the 2019 Bridgeport High School football team for capturing the West Virginia Class AA championship. The Tribe defeated Bluefield High School 21-14 at Wheeling Island Stadium on Dec. 6, the team’s 10th Class AA championship and the first once since 2015.
Doing the honors was Councilman Jeff Smell, a member of the 1988 Bridgeport High School state championship football team. Athletes and coaches were commended for their hard work, dedication, perseverance, leadership and teamwork for a season in which they outscored opponents 490-160. Head Coach John Cole thanked Council for the recognition. Each athlete was presented a Key to the City lapel pin by City Clerk Donna Krivosky.
Also receiving a proclamation was the GFWC Woman’s Club of Bridgeport, noting the civic club’s 70-year service.  Among the countless projects of the club have been spearheading the $1.3 million pledge drive to purchase the Bridgeport Public Library Building, donations to the city for fluoridation of water, bleachers for the football fields and support of March of Dimes and the American Heart Association. Members of GFWC in attendance served a 70-year anniversary cake to Council and audience members. They also provided everyone with fabric tote bags to support their effort of keeping plastic out of landfills.
Council and the large audience were also introduced to Connor, the newest member of the Bridgeport Police Department. A golden retriever, Connor is owned by Prevention Resource Officer Jamie Hamrick, who polices the city’s schools. The family pet has recently been certified as a therapy dog and will be utilized in the school system as the department launches its Canine Outreach Program. (Read more about Connor and the program in a forthcoming story by Trina Runner.) 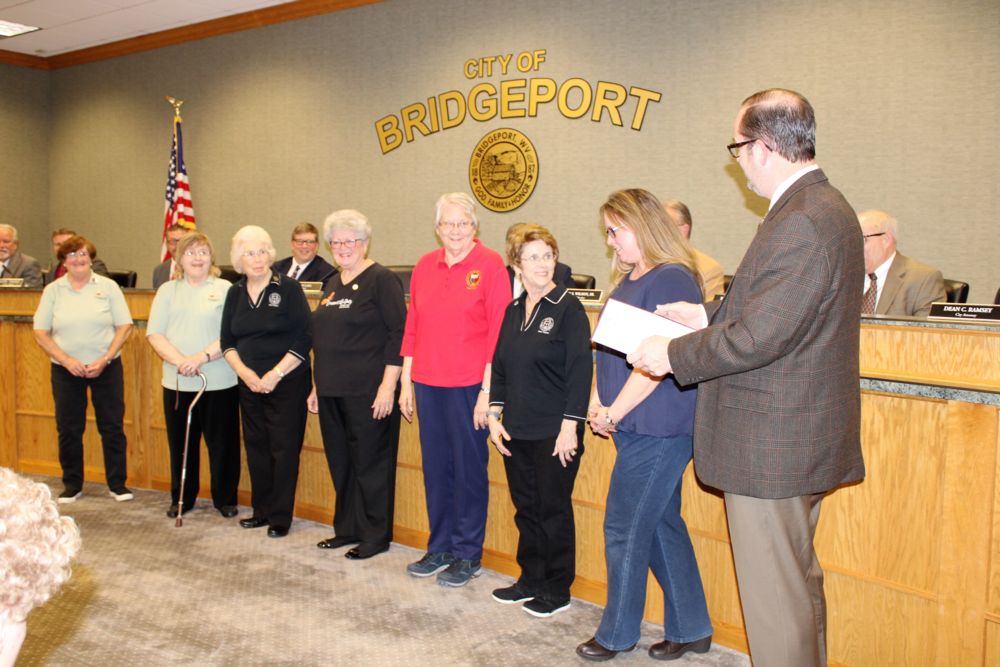 The first business item was the swearing in of Bridgeport Deputy Chief of Police Leon Mark Rogers and Sergeant Louis Janssen.  Mayor Lang did the honors with Chief John Walker also part of the ceremonies. Walker said Rogers and Janssen are longtime members of the department, both who have served in various capacities.
“These guys have both been really successful because they put their heart and soul into this job,” he said. “I also thank their support systems for being here tonight. I believe it is those support systems who make them what they are.”
By unanimous vote, Council approved the appointment of Ron Eagle to the Bridgeport Development Authority for three years. Mayor Lang said he has had 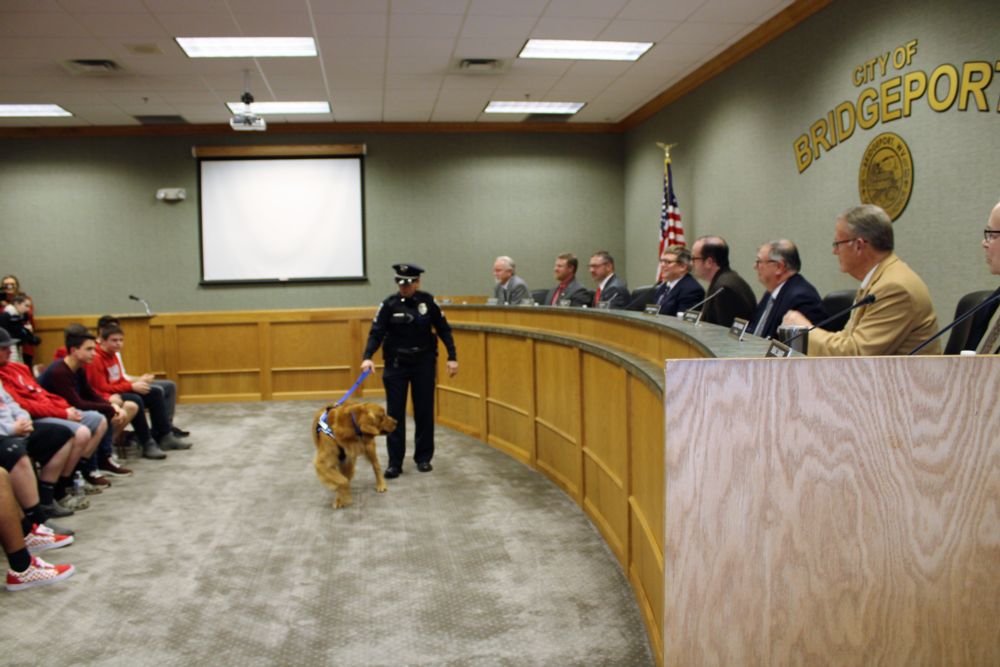 opportunity to work with Eagle and believes he will be a great asset to the board. Smell agreed and spoke in favor of the candidate.
“With Ron being in aerospace and air automation, I believe he definitely fits that board,” he said.
The city’s governing body also voted unanimously to make additional payments to Omni Associates, the architect for the Indoor Sports and Recreation Complex, in the amount of $39,000. The payment is for additional design meetings on the complex. City Manager Randy Wetmore said the original request was for $41,038.68, but Omni agreed to shave that figure by five percent. 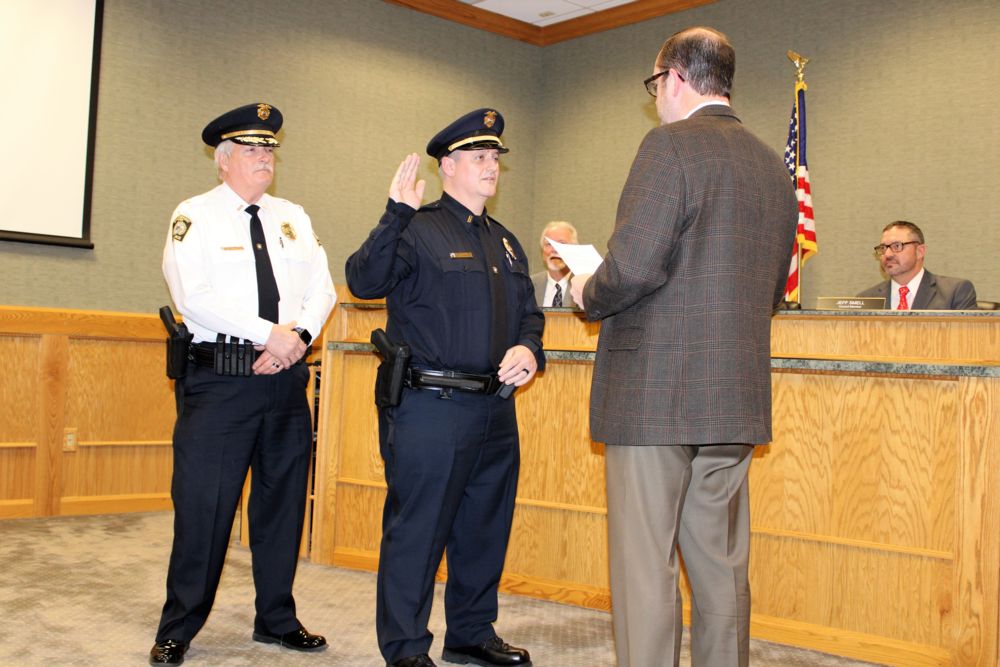 Councilman Bob Greer explained the reason for the additional payment.
“We had a contract for a specific number of meetings, but there were more meetings than what was called for in the contract,” he said. “This is a fair resolution, I believe, to the outstanding matters involving Omni.”
Council also approved additional construction site visits for Omni, not to exceed $5,000 per month, a similar situation to the contracted design meetings.
“When we started the project, we asked for a certain number of 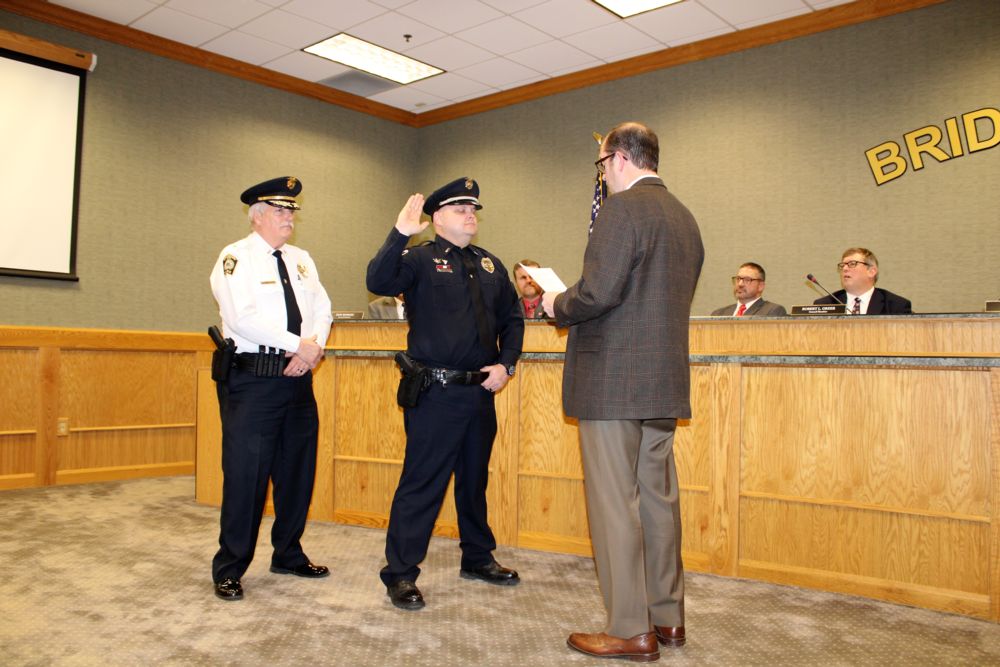 visits and as the project went along, it became a little more complex,” Wetmore said. “We want to make sure it is done right and we don’t want them to have to come back and fix things after the fact.”
City Engineer Beth Fox is involved on the front end of the process and approves all site visits, Wetmore said.
The next item on the agenda was the consideration to accept $32,000 worth of training from the WVU Fire Service Extension in exchange for the Bridgeport Fire Department’s 2005 Pierce Pumper. Because of safety concerns, the truck will be permanently stationed at WVU Jackson’s Mill and will replace the 1979 apparatus currently being used. Council unanimously approved 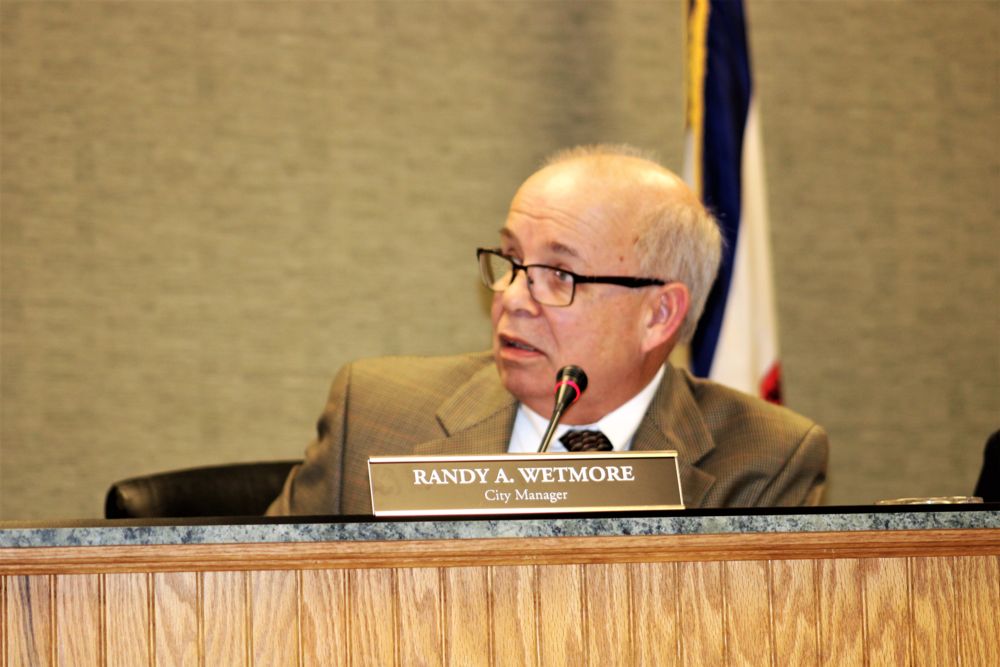 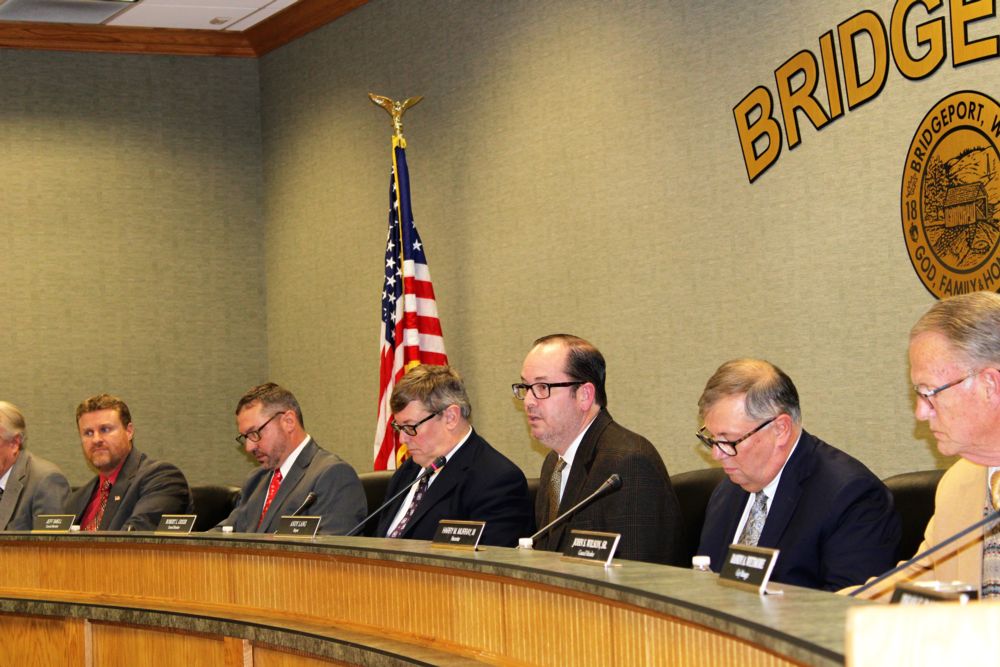 have SFM provide a GM and events coordinator,” Wetmore said.
After filing the two positions, it is hoped to have both individuals on board well before the opening of the complex; ideally, the GM on the job a year prior to the launch of the facility, he said.
Wetmore and City Attorney Dean Ramsey have both indicated they are comfortable with the addendum and were in favor of moving forward with it. Council unanimously approved.
Next on the agenda was to consider and act upon the 2020 City Council goals. The item was placed on the agenda, Wetmore said, to give Council ownership of the goals which were reached through a series of strategic planning meetings held in late-2019. After a six-month period, action on those goals will be reported. Council again voted affirmatively. 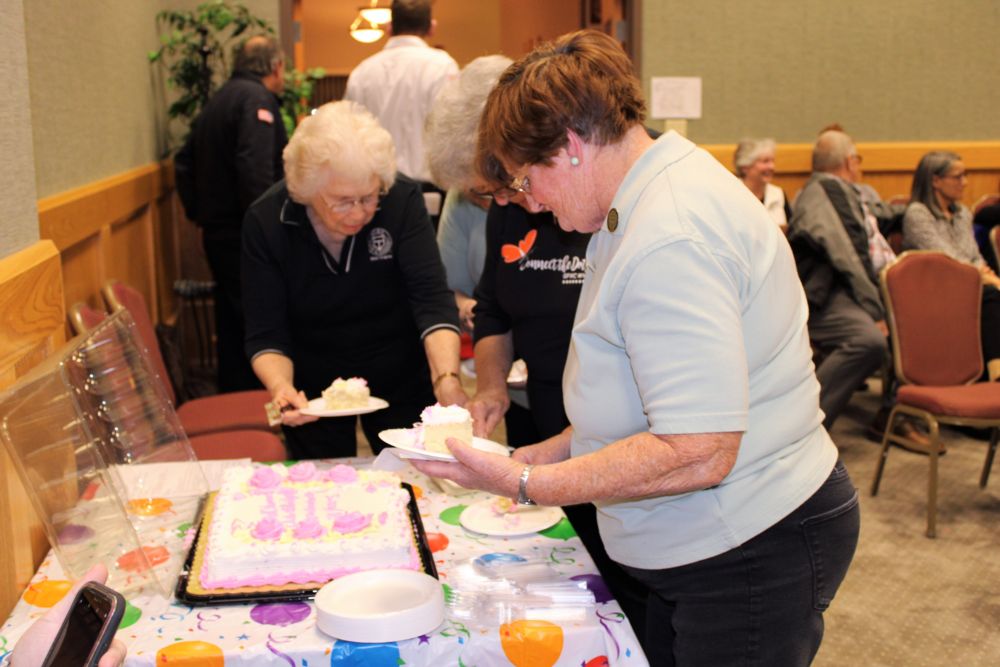 Before adjourning, Council approved a pair of budget revisions. General Fund Budget Revision #5 was to budget the award of a $65,000 Homeland Security Grant. The grant will be utilized to purchase communication equipment for police and fire departments compatible with the FBI equipment since the department is now responding to all EMS calls with the FBI CJIS, Finance Director Monica Musgrave said. Capital Reserve Fund Revision #3 appropriates last year’s hotel/motel tax in the amount of $45,400 for various capital items for the Parks Department. Musgrave said $19,450 will be used to purchase items for the new building on Route 131. Among others, the items include a utility trailer, lockers, shelving with work benches, IT and security cameras, washer and dryer and various furniture. The amount of $12,000 will be used to purchase and install fencing on the wall beside the Benedum Civic Center and $13,950 will be used for pool maintenance items: two lifeguard stands and six ADA sink faucets. 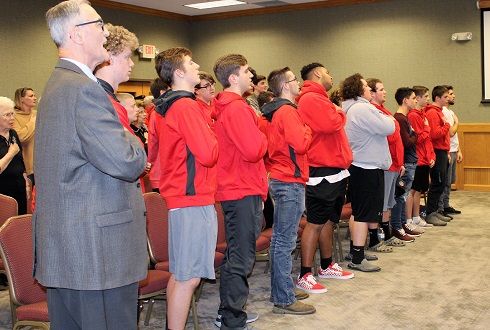 Council’s next meeting will be held Tues., Jan. 28, rather than Monday, Jan. 27 as some members of Council will be attending the West Virginia Municipal League Conference in Charleston.
Pastor Mike Hopkins of Simpson Creek Baptist Church provided the invocation for the meeting, followed by the Pledge of Allegiance. The meeting was preceded by a work session featuring a presentation by Matthews International about plans for a proposed mausoleum to be built at Bridgeport Cemetery.