Pallets of Water, Cleaning Supplies Delivered by City Officials to Section of Kentucky Devastated by Floods

Traveling the backroads at times between West Virginia and Kentucky is not for the faint of heart. Winding roads and steep inclines and declines can make it less than comfortable for some.
Add in a 20-foot U-Haul truck filled to the gills and it can be a bit cumbersome.
Those obstacles, however, were not an issue for Bridgeport Director of Emergency Management Tim Curry who was joined by Parks and 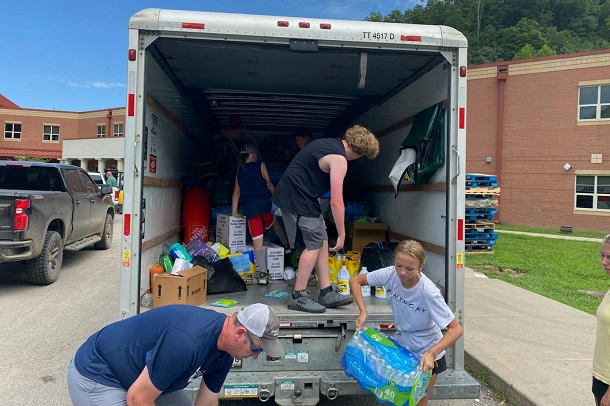 Recreation Director Joe Shuttleworth Wednesday on a trip from Bridgeport to Whitesburg, Kentucky.
The purpose of the trip was to deliver needed supplies to that part of the state recently devastated by flooding. And the reason the trip was possible was because of Bridgeport and surrounding communities, along with a few businesses, stepping up to provide the supplies.
A quick announcement ahead Monday, ahead of Tuesday’s National Night Out event, had Curry’s department calling for the community to assist by donating needed supplies – primarily water and cleaning supplies - to The Bridge Sports and Recreation Complex both before and during the NNO event.
“We started at noon and the cars were already pulling up,” said Curry. “It went to around 8:30 p.m. when we basically had it filled but had to add more a bit later.” 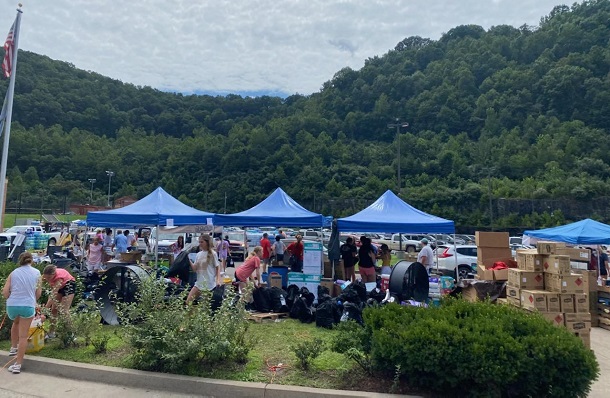 Curry said along with countless number of community members both locally and from afar, Lowe’s and Home Depot both brought supplies to be taken.
“We put everything on pallets since we knew a lot of the items could be removed by forklift. We had five pallets of water, five pallets of cleaning supplies and more than 100 five-gallon buckets,” said Curry. “It was amazing. I wasn’t sure what to expect, but what happened was so positive and appreciated not just by us, but by those we assisted.”
With the U-Haul filled to the top and nearly from front to back, Curry and Shuttleworth traveled Letcher County High School, which was just beyond the

worst of the damage. Although Curry said they were aware the damage was severe and the supplies were needed, but if they would have had doubt it would have been erased on the trip.
“We were on 119, which runs along the river into Whitesburg, and we saw houses off of their foundations, we saw mud everywhere, water lines clearly visible where the water was so high and debris all over the place,” said Curry. “It was intense and heartbreaking, and we know we didn’t see the worst of it. The next county over, Hazard, was moved over.”
The near 10-hour round trip was mostly driving. Curry said once had and Shuttleworth arrived at the high school, which was the staging area and supply hub, things were unloaded quickly. And Curry said they saw something positive.
“The first thing you noticed was that as they were unloading supplied, people were taking supplies out immediately,” said Curry. “The second thing was that kids from the high school, boys and girls alike, were doing most of the work with some adults and National Guard members assisting. They were students at that high school, and they took ownership of the situation in 100-degree weather.
“You don’t want to see it happen but seeing those kids caring renews your faith in things,” he said. “We saw the best in people as on the way down you saw truckloads of water on flatbeds, U-Hauls going in the same direction to supply points, so you knew they were doing what we were doing.”
Curry said the basic items brought were water and cleaning supplies. He said he asked for those specific items after conversations with officials from Kentucky’s Emergency Management Department as to not to bring items that would create clutter and add to the problem as opposed to assisting.
Editor's Note: Top and bottom photo shows Joe Shuttleworth, to the left, working with students of Letcher County High School to unload supplies, while the second photo shows the massive staging area where supplies were being unloaded and almost immediately delievered.