Passion has been a defining characteristic of Wes Hanson’s life so it’s only fitting that word would be a big part of his new business venture.
Hanson is a general contractor and the owner of North Central Building Solutions which is based out of Bridgeport and although they specialize in roofing, they offer plenty of other services. 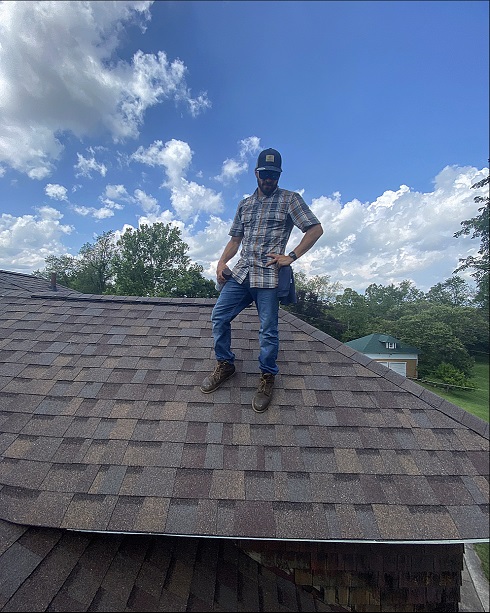 From complete roof replacements to repairing a pesky leak, as well as handling of insurance claims, storm restoration, gutters, shingle roof repair, landscaping, mulch/gardens and small demolition, Hanson says his company is committed to providing top-notch work in a timely fashion that meets customer satisfaction.
“One of the biggest parts of our business is being personable with the customer,” Hanson said. “It’s not just we will come do your quote and you don’t meet us then we leave and expect to get the sale. We like meeting our customers and talking to them. We want to get to know them before we do their job.
“My saying, one of our logos, is ‘Your Project, Our Passion.’ So, if I don’t know the customer and what their project entails, I can’t put our passion into it.”
The company has already made its mark, serving clients all around the state, including but not limited to Buckhannon, Weston, Glenville, Bridgeport, Clarksburg, Fairmont, Morgantown and even areas of Pennsylvania and Ohio. Their doors opened for business in the early part of June and they have already completed a significant amount of jobs.
“Twenty-two since we got started,” Hanson said. “Most of our work has been in Bridgeport, Weston and Morgantown. We’ve worked on nine to 10 houses in Weston in the same neighborhood where a hailstorm hit awhile back.
“The crew that we have right now, all the credit goes to these guys. They are hard workers and they don’t stop until a job is done. We don’t like going back to a house a second time. Out of the 22, there have been three jobs where we had to go back a second day to finish a job.”
Hanson said he has been around roofing most of his life but the journey to owning his own business had a unique path to say the least (Stay tuned to Connect-Bridgeport for a more in-depth look at that journey in the upcoming days). 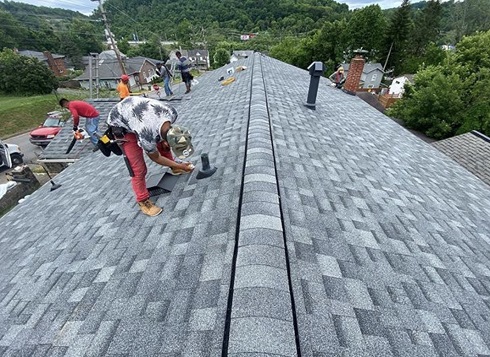 A football standout and state wrestling champion at Herbert Hoover High School in Kanawha County, Hanson would go on to walk-on to the Glenville State football team. By the time his collegiate career had ended, he was a team captain and an elite special teams player.
Along the way he started boxing and eventually made a successful transition into a professional mixed martial arts fighter and a professional kickboxer. Hanson has an overall combat record of 54-6.
While he was training to be a fighter, he was also soaking up knowledge and learning skills that would just add to his general contracting resume down the road. In addition to what he already knew about roofing, time in Texas resulted in some good hands-on training in landscaping, hydro-mulching, geothermal heating and cooling, irrigation installation and irrigation control.
“I worked in Dallas for a landscaper that showed me what it was like to be a contractor. He showed me the ropes when I was younger and I was able to see what it was like to landscape in a huge state like Texas doing 5A football fields and multi-sports complexes. I was able to add that aspect to this business I have now.
“Texas was the best work experience. My Dad has always been an entrepreneur, always had his own business. Watching my Dad, growing up that showed me a lot too. My uncle was a roofer as well, so I was always around roofing while I was growing up. From loading shingles to cleaning up the ground, I’ve always been around it. But when I got to Texas and saw the scale of it and how big it could grow and got some true experience, I learned so much then.”
His athletic success had some extra benefits that are paying off now as a business owner. 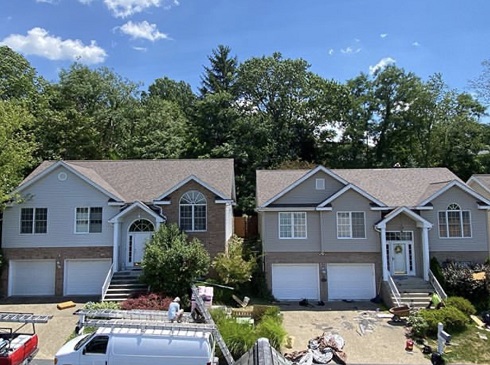 “I got to meet a lot of cool people,” Hanson said. “I met people from Russia, Japan, China, there were a couple of people from Thailand. I got to meet every race, every gender, every make and model of a person you can think of, I got to meet them.
“Wrestling in high school trained me more for life than anything ever has. If you can get through wrestling and be competitive and good, you can prepare for anything in life. But meeting all those people, having that experience talking to different people, seeing where they came from and being able to put myself in someone else’s shoes, that trained me more for this job than actually contracting in Texas did.”
Once Hanson settled in Bridgeport it didn’t take him long to realize that his skillset and knowledge had reached the point where it made sense to try running his own business rather than working for someone else.
He had his business license, general contractor’s license and all the insurance in place for North Central Building Solutions by the end of the first week in May.
The COVID-19 pandemic did slow down the paperwork process when it comes to the licensing but that’s really the only drawback in getting the business started. Hanson said the pandemic helped in some regard as people were sitting around their houses in quarantine looking at their roofs and noticing leaks they had not noticed before. 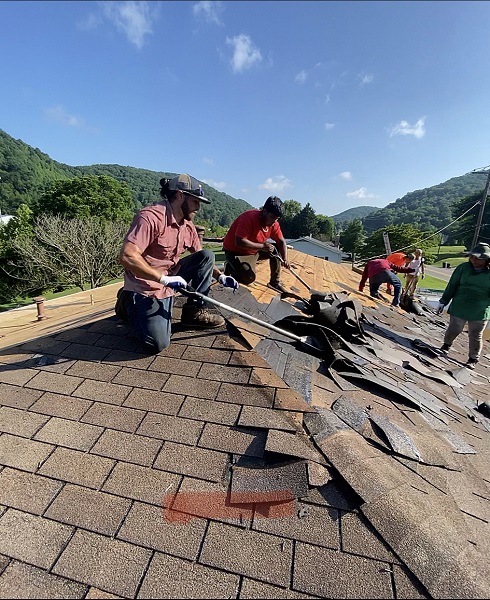 So, in roughly three months North Central Building Solutions was established and performing jobs. It took even less time than that for the business to show its passion for helping people extended far beyond roofing.
Cayla Kemper, a friend of both Hanson’s and his business partner, Matt Fisher, is a WVU student who in June was diagnosed with Stage IV Hodgkin’s lymphoma. Hanson and North Central Building Solutions has already helped pay some medical bills in full and has launched “Campaign for Cayla” where proceeds from their completed jobs will go directly to Kayla’s MedGift account.
Cayla’s MedGift account can be found HERE
While having the type of business that promotes family, community and has the ability to pay it forward to those in need is something else Hanson is passionate about, it wasn’t lost on him that his company is relatively new and even established companies are struggling financially in today’s pandemic-dominated world. It wasn’t lost on him and it also didn’t matter.
“I think those points were all brought up by my and my business partner’s significant others,” Hanson said. “Not that they didn’t think it a was a great cause but they asked, ‘Do you all really have the funds right now to be giving away a part of your profit?’
“And I was like, ‘No, actually we don’t. But at the end of the day, someone we know was in need more than we were.’ We have strong faith in the Lord and the Lord provides. If we are giving away a little bit, I still know the Lord is going to cloth my family, feed my family. There is no doubt in my mind, I’m going to be taken care of so if I don’t have to hold on to every penny right now, I will do anything I can to help that girl.”
In addition to offering financing, warranty coverage and free quotes, North Central Building Solutions also offers a military discount.
More information is available by calling (304) 202-7941, (304) 982-1843 or (304) 672-2399 or by visiting the North Central Building Solutions website HERE
Editor's Note: Top photo shows Wes Hanson inspecting a roof and the fourth photo features Hanson and his NCBS crew on a job. Both photos submitted by Hanson. The middle two photos show two different jobs NCBS has done and are courtesy of the company's Instagram page.